July 10, 2018 - The recent run on lumber prices has put big smiles on the faces of sawmill operators and lumber traders. 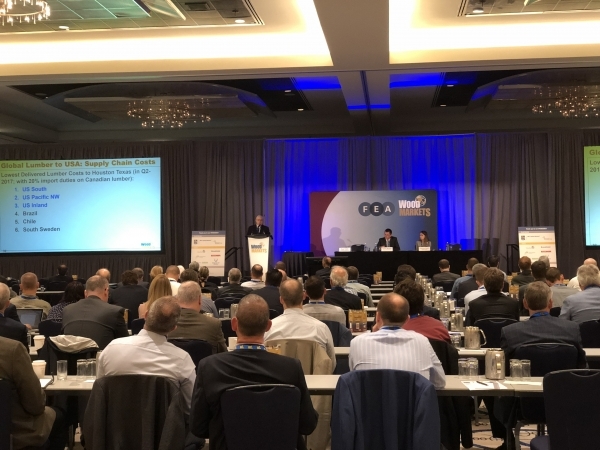 Mill prices for all lumber species in North America have been trending higher since preliminary U.S. import duties began in February 2017, and especially after permanent duties (averaging 20.2 per cent) started in late December. While the implementation of U.S. import duties on Canadian lumber was expected to push prices up somewhat, the interaction of several factors — the seasonal impact of summer forest fires in 2017, severe winter weather followed by railcar shortages in 2018, and continued strong demand in export markets — has created an almost perfect storm. As a result, record-high lumber prices have been achieved in June for all species before deducting Canadian import duties on U.S. shipments. In addition, record prices have been seen in such other markets as Japan. One of the major exceptions, however, has been in studs: U.S. prices have languished in comparison to dimension lumber but they also hit record levels.

Are we in the “super-cycle” that WOOD MARKETS first predicted in 2007 and again in 2010? Maybe/probably. Certainly the reduction in lumber output in the B.C. Interior and Eastern Canada has turned out as projected. The wild card has been the level of demand and (particularly) U.S. housing starts: these have recovered much more slowly than almost everyone expected but are now at a level that reveals the supply gap. This is why European lumber exports to the U.S. grew by 140 per cent in 2017 and are up 125 per cent through the first two months of 2018: Europeans (and Russians), attracted by high U.S. lumber prices, are providing the incremental volumes that Canada and U.S. sawmills cannot supply.

As a result, sawmills are achieving incredible earnings, with some (West Fraser, Canfor, Weyerhaeuser, Resolute) seeing 20 plus per cent EBITDA (earnings before interest, tax and depreciation) on Canadian and U.S. sawmill operations in Q4 2017 and again in Q1 2018. This should translate into windfall earnings in 2018 and into 2019, and one issue facing some larger firms will be what to do with the cash generated. The thing all will need to remember is that their entire supply chain (from loggers through to customers) needs to be properly managed and maintained if strong operating results are to be achieved.

While commodity lumber prices started moving off their peak levels in mid-June, the market outlook is still very good. This trend was borne out at FEA/WOOD MARKETS 8th Annual Global Softwood Log and Lumber Conference, held May 9–10 in Vancouver. This year’s conference featured a most unusual sense of optimism, the result of U.S. commodity lumber prices that were at record highs. At the same time, all major global markets were in good shape, with no real downside in sight — a rare situation for the global log and lumber industry! In addition, panels are doing well globally, and the pulp market has been on a tear.

Struggling US housing recovery
Brendan Lowney of FEA-US presented his outlook at the global conference for macroeconomics and housing in North America. U.S. economic growth is relatively healthy, with GDP growth of up to three per cent expected for 2018. Despite the improvement in the overall economy, U.S. housing construction still lingers at levels normally seen during a recession.

Labour and land shortages have combined to create a drag on the housing recovery. Labour shortages are a growing trend, with 77 per cent of builders reporting difficulty finding qualified framing crews in 2017. The deep housing recession knocked many smaller builders out of the market and discouraged young workers from entering the building trades. Now, with a wave of workers retiring, there are few qualified tradespeople to fill the labour void. Also, there are about a million fewer Mexican workers in the U.S. than prior to the recession. Shortages and the cost of building lots have risen every year since 2011 (currently, 67 per cent of contractors report lot shortages). Tight land-use restrictions, especially in coastal states such as California, are largely responsible. Increased regulatory burdens and permitting delays have also added to builders’ costs.

The bottom line for North American lumber demand is that it will grow by only about four per cent per year. Although forecasted to expand steadily, even in five years’ time it will still be well below previous peaks. Nevertheless, the ability to supply this market at a slow and stable growth rate is going to be a challenge for North American mills.

North American and global trends
All-time price records have been reached in the U.S. and Japan, with markets in China and Europe remaining healthy amid rising prices. Despite log and lumber producers’ attempts to ramp up production and add additional capacity, these increases have not been enough to match demand in the U.S. and some export markets. Although the current commodity lumber price cycle has ebbed, the overall trend of above-average (and high) prices is expected to continue for the next two years and possibly longer.

Looking at logs, total global industrial roundwood consumption has lagged GDP growth over the 20-year period 1996–2016, while pulpwood consumption has risen more quickly. Although the supply of hardwood pulp logs (plantation-grown eucalyptus) has risen to match demand, there is currently a shortage of softwood pulp in parts of East and South Asia. Global coniferous (non-pulpwood) log demand has averaged 0.55 per cent per year since 1996, while coniferous pulpwood demand has grown by 1.62 per cent annually. Looking out to 2030, global industrial roundwood demand (all species and grades) is expected to increase from 1.88 billion m3 to 2.08 billion m3 per year, a gain of 200 million m3 per year.

The trends in global wood products trade have been mostly stable over the past decade. However, there have been some changes in supply and demand, with consumption shifting from North America to Asia, and with plantation-grown wood taking market share from tropical hardwoods. Log-export restrictions in many countries have contributed to strong growth in lumber exports (especially to Asia).

North American softwood timber
While the outlook in Eastern and Western Canada, as well as the U.S. West, is for relatively flat (to declining) log production, log supply is growing and available in the U.S. South. Against a backdrop of soaring and record level lumber prices with limited growth in production or imports, it is still difficult to see any short-term downside.

For Canadian timber companies, log supply is tight — even declining in some regions. In B.C., for example, the effects of the mountain pine beetle outbreak will eventually lead to the closure of at least an additional 1–1.5 billion bf of sawmilling capacity (potentially three to five sawmills). The timing of such closures will depend partly on lumber prices, as higher prices allow for some ongoing mixing of dead logs with green logs. B.C. forestry companies are travelling increasingly long distances to harvest poorer-quality dead timber; therefore, in the next pricing downturn (or as the shelf life is passed), the more distant beetle-killed pine will no longer be economically viable.

Some parts of Eastern Canada could increase harvest levels over the short-term to make up for depressed harvest levels during the recession. However, due to other constraints such as the federal Species at Risk Act and Indigenous land claims, long-term harvest levels are projected to be flat. Compounding the log supply challenges, the closure of regional newsprint mills has left many eastern Canadian sawmills without a reliable, cost-effective outlet for their chips.

Sawmills in the U.S. West must compete with export markets for a relatively fixed supply of logs. However, thanks to recent record-high U.S. lumber prices, local mills have been able to compete with Asian log buyers, so output has moved marginally higher. This trend of an increasingly greater share of timber volume being used domestically is expected to continue over the five-year forecast period, especially if lumber prices remain above trend.

In contrast to the U.S. West, the U.S. South has excess log supply that is keeping log prices well below pre-recession levels. Harvest levels are currently approximately 10 per cent below what the forest could potentially supply and, with timber levels growing, there is a bulge of inventory reaching harvestable age. Some of this extra log volume is feeding an emerging log export industry, with the majority being shipped to China. However, the log export volume is small compared to the volume sawn domestically: in 2017 (the biggest export year on record at 400,000 m3), this volume was still about the same as that consumed by an average sawmill. The southern sawmilling industry is gradually catching up to the log supply. Seven greenfield mills are planned over the next two years, and there are at least eight mill expansions or restarts scheduled (some 3 billion bf), with more anticipated. As well, existing sawmills are steadily being upgraded to be more efficient/larger, with more kiln and planer capacity. Since sawmills take up to two years to build and perhaps an additional year to ramp up, the impact (if any) of new mill start-ups on regionwide log and lumber prices will depend on timing. Nevertheless, while annual timber growth still exceeds the harvest across the region as a whole, local operators must be cautious not to trigger local log price spikes by opening too much local mill capacity all at once.

Sawmills in the U.S. South are gradually shifting from labour-intensive, single-shift mills to high-tech, multi-shift manufacturing. While labour costs are currently 30–45 per cent lower than elsewhere in North America, they will likely rise over time. Log costs will also rise eventually as a result of simple supply and demand dynamics. By investing in more efficient technology, sawmillers are ensuring they are well placed to operate their mills efficiently as a higher-cost environment evolves.

Speakers and panel members at the Global Conference were asked to comment on where in North America their respective firms might next invest. While the growing fibre basket in the U.S. South has attracted investment from outside the region (three of the top producers by volume in the U.S. South — collectively owning more than 40 sawmills — are now Canadian), the general consensus at the conference was that firms are getting a better return on investment from mill upgrades than on acquisitions or greenfield construction (due to the latter’s high capital costs, long waiting times for equipment, and risks in starting up expansions or new mills).

Summary
For many softwood producers and distributers in North America, the next few years will present a period of risk, opportunity, and change. Log supplies are shrinking in some regions and growing in others. Domestic lumber demand is gradually picking up, and it may require further increases in offshore imports coupled with sustained high prices to match U.S. as well as global demand with supply. Stay tuned!

This article is extracted from WOOD MARKETS Monthly International Report, found at www.woodmarkets.com/publication/wood-markets-monthly.

Russ Taylor is the managing director for FEA Canada (WOOD MARKETS) based in Vancouver. International WOOD MARKETS Group was purchased by Forest Economic Advisors LLC in August 2017 and now operates as FEA Canada.