The latest data from the Western Wood Products Association shows that Canadian and U.S. softwood lumber production and sawmill capacity utilization rates improved in March. Finally! Lumber prices have been so strong in the past year in part because the huge — and sudden — increase in demand was met by supply levels struggling to serve this unexpected situation. It takes a long time to ramp up a sawmill, to bring a sawmill out of curtailment, to restart a mill that has been closed. Meanwhile, new housing construction activity and home sales across North America shot up very sharply, and have not really abated.

Western S-P-F price levels in the US were all over the place for the week of June 10. While the general tone was one of significant correction across the board, reported price levels varied wildly depending on the source. Sawmills reduced their asking prices by triple digits in many cases, and secondary suppliers sold below those levels. Steady supply volumes remained outpaced by low key but strong demand, such that producers could be firm in rejecting the deepest counter offers. Buyers with more than a week’s worth of inventory waited out the market to see whether this downward trend will persist.

Canadian producers of Western S-P-F had another slow week of inquiry even as they reduced asking prices by massive chunks on bread and butter items. Order files shrank to approximately two weeks but sawmills remained loathe to accept deep counters on top of their slashed asking prices. 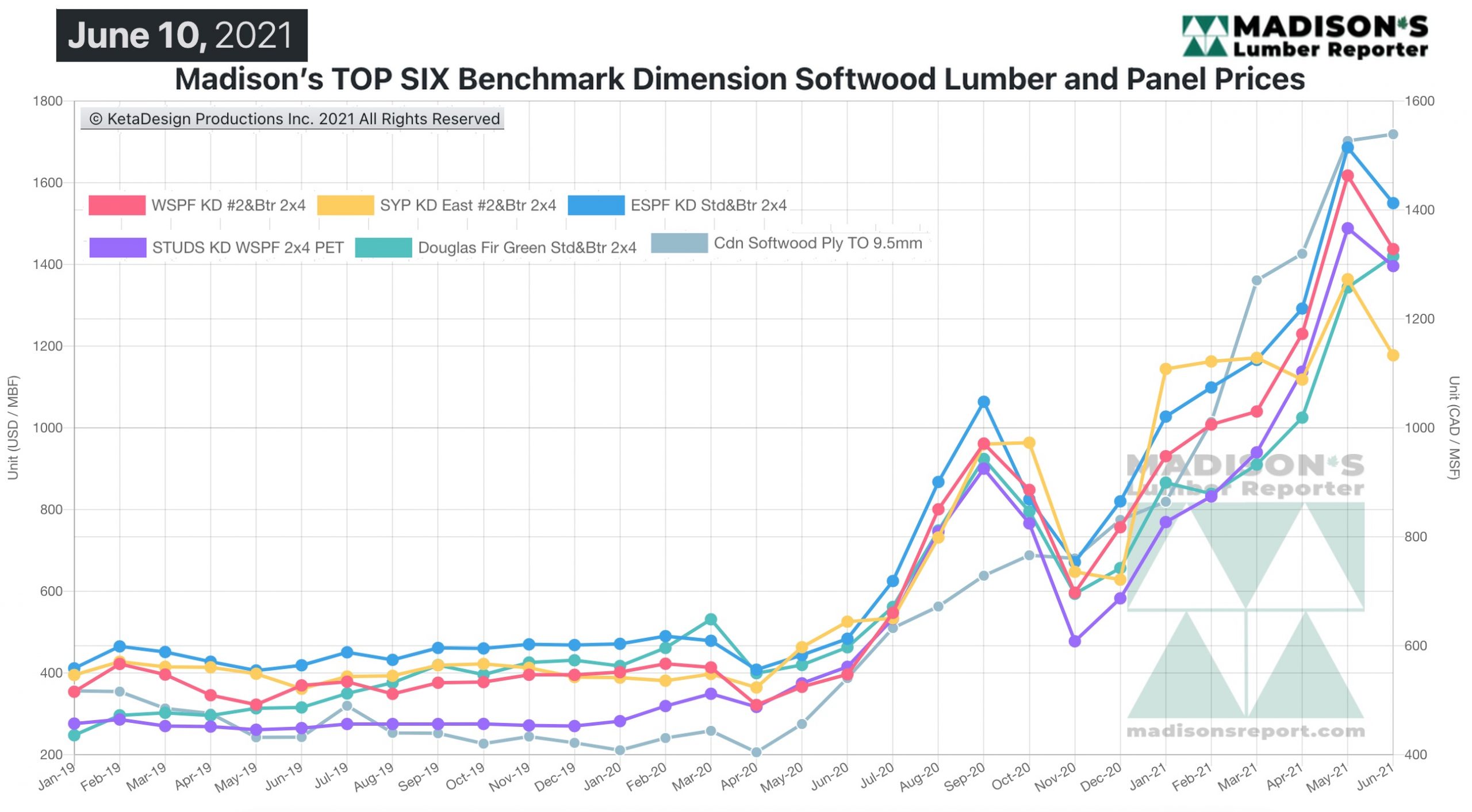 Lumber market conditions finally turned in the favour of customers — for the time being, at least — for the week ending June 10, 2021 the wholesaler price of benchmark softwood lumber commodity item Western S-P-F KD 2×4 #2&Btr corrected down significantly, by -$325, or -21%, to US$1,275, from $1,600 mfbm the previous week.

“Green Douglas-fir producers held on for dear life as the rest of the market plummeted. Underscoring the strength of green wood were reports of secondary suppliers selling it for more than kiln-dried for a spell as sawmills adjusted their asking prices. Meanwhile, Purchase Order books were slammed closed according to players. With sawmill order files into early-July, producers thought they might be able to out-wait buyers.” — Madison’s Lumber Reporter