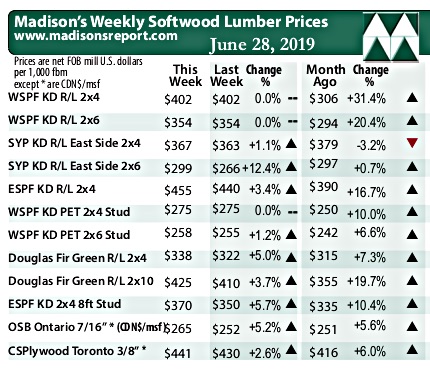 Compared to the wild highs of one year ago, lumber prices this week can be described as “moderate.” For this exact week in 2018, the price of benchmark North American construction framing dimension softwood lumber commodity Western Spruce-Pine-Fir KD 2×4 #2&Btr flatlined for several weeks at an astonishing U.S. $622 mfbm. Since then this price has headed mostly downward, fluctuating somewhat earlier in the year as it struggled to find the floor. This week that price level seems to be matching up with those seen in summer 2017 (please see graph below).

Sales volumes remained respectable but not enormous as players in Canada were wrapping up business and closing their offices Friday for the Canada Day long weekend. This absence of work north of the border did nothing to prompt additional purchasing from solid wood buyers, who felt no urgency. Inventories remain robust throughout the supply chain.

It seems a shift is afoot in Canada with producers of Douglas fir lumber: in addition to reduced production levels from this week’s holiday-related shutdowns, Douglas-fir commodity manufacturing out of Canada appears to be on the wane as many sawmills in Southern B.C., are running spruce in its stead. Madison’s will provide more details on this important change soon.

After a big correction upward a few weeks ago, benchmark lumber commodity Western Spruce-Pine-Fir 2×4 wholesaler price stayed flat at U.S. $402 mfbm compared to the previous week. This week’s price is +$96, or +31%, more than it was one month ago. Compared to one year ago, this price is down -$220, or -35%.

Day-to-day sales volumes remained solid last week but prices levelled off as players throughout the supply chain waited for lumber to move through the system. — Madison’s Lumber Reporter

Transportation equipment was comparatively plentiful thanks to curtailments and shutdowns taking so much overall volume out of the equation. More supply will be removed this week when a large swathe of sawmills on both sides of the border will shut down for the week in view of the Canadian and American national holidays. Mid-July order files were commonly reported by sawmill and shipping was again unseasonably smooth.

 
In the Pacific NorthWest, business was great for Hemlock and Fir (Hem-Fir) players, with sales of inland and coastal species especially still cranking. Prices of kiln-dried Douglas-fir were flat for the most part, aside from undersupplied 2×12 jumping $25 to U.S. $510 mfbm. Producers’ order files were booked into the weeks of July 8 and 15 with ease, again maintaining production levels where they wanted them. Prices were approaching break-even levels for dimension lumber mills in the northwest, while producers of studs were not quite there yet. Nine-foot studs have been bizarrely underproduced in recent weeks, causing many stud mills to go off-the-market on that length. In addition to reduced production levels from this week’s holiday-related shutdowns, Douglas-fir commodity manufacturing out of Canada appears to be on the wane as many sawmills in Southern B.C. are running spruce in its stead.