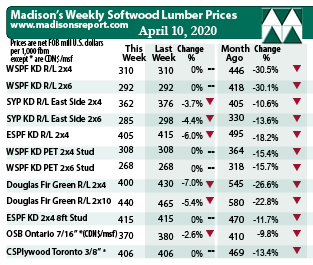 The recent changes, disruption if you will, to the supply-demand balance of North American construction framing softwood lumber and panel products have worked their way through the market. Last week customers came back to suppliers with higher-volume orders than in recent weeks. This provided sawmills the ability to hold steady on prices for benchmark Western Spruce-Pine-Fir 2×4 #2&Btr KD (RL), at USD$310 mfbm. Producers in other regions like the U.S. south or Quebec dropped prices slightly but refused to go any lower.

Western S-P-F traders in the United States reported a steadier pace to sales activity last week as reduced production helped stabilize business and slow the bleeding of prices. Substantial volumes of low grade were ear-marked for shipment to China. There are many questions about home building and construction activity in the U.S. Last week buying from reloads and stocking wholesalers was relatively strong, however the final destination is remodeling and home improvement rather than new housing starts. Expectations are that major construction activity in the U.S. will return later this summer. 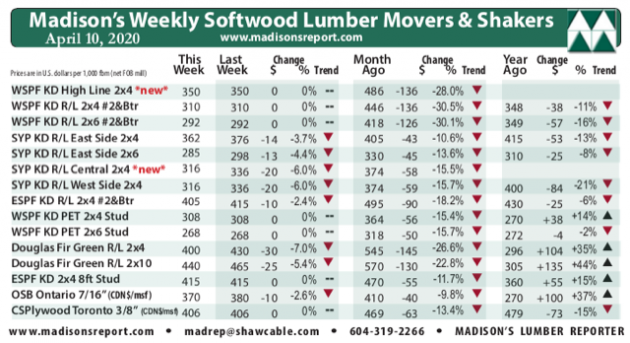 Widespread curtailments at virtually every major Canadian lumber producer stopped the free fall in WSPF pricing last week. Order files at sawmills began to stretch out up to two weeks depending on the product. A burgeoning sense of panic spread among customers with depleted inventories as they realized the lion’s share of extremely limited production was spoken for. Major suppliers had already designated virtually all their low grade production for shipment to China.