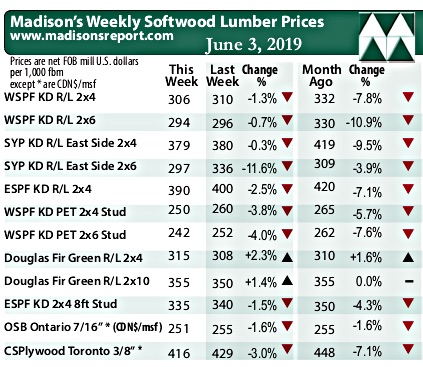 Confusion reigned only more last week in the North America construction framing dimension softwood lumber market as demand was very soft for what is normally the big home building season in the U.S. This week, major producers announced further permanent closures and curtailments for British Columbia sawmills, due both to high log costs while lumber prices are low and to lack of future timber supply as a result of the mountain pine beetle infestation and the 2017 wildfires. A wildly yo-yoing lumber futures board on the Chicago Merchantile Exchange did nothing to help players get clarity on what is happening in the market.

Wildfire season has already begun in Canada this year, with a massive blaze in northern Alberta forcing the evacuation of the town of High Level. The fire continues to grow, engulfing an area of more than 130,000 hectares.

There was a slight improvement in the business of selling lumber last week, in large part thanks to steep price drops on benchmark lumber commodity items. Producers in the U.S. were encouraged by better inquiry and sales volumes, but still frustrated that they had to nudge prices down again to get the ball rolling. Resultant bookings at sawmills got as far as two weeks out on a few items, while many others remained at one week. Rumours continued to swirl of more forthcoming mill curtailments, this time related to facilities in the U.S.

Many standard dimension lumber players were encouraged by marginally better business this week; sales of studs and panels floundered on. — Madison’s Lumber Reporter

Canadian WSPF producers were “quite a bit busier” this week than they have been in awhile. Trading activity in futures, threat of wildfires, and an increasing lack of quick supply helped nudge many buyers off the fence. Sawmill order files extended up to “a couple weeks” on 2×4 and 2×6 #2&Btr R/L. Meanwhile, promptly available 2×8 and 2×10 started to disappear after mills reduced prices on both by $10 to U.S. $300 mfbm and U.S. $322 mfbm, respectively. Sales of low grade was still a little sluggish.

Another round of curtailments came to British Columbia, this time at Interfor’s Castlegar and Grand Forks sawmills. Due to a combination of weak lumber prices and persistently high log costs, the company’s three mills in Southern Interior B.C. will see down time for several days in the month of June.

Production curtailments announced last week by Interfor are expected to be reduced by roughly 20 million board feet in June, or 2.7 per cent of the company’s total annual capacity of 750 million board feet. — Madison’s Lumber Reporter

Decent weather in target sales markets resulted in spurts of demand, but by the time building in one region got going, another would go down to flooding or heavy rain. For their part, sawmills maintained hand-to-mouth order files, reluctantly filling rail cars and taking “whatever the hell orders they could get” on prices. There was no point even trying to establish a sawmill order file at these price levels.

The below table is a comparison of recent highs, in June 2018, and current May 2019 benchmark dimension softwood lumber 2×4 prices compared to historical highs of 2004/05 and compared to recent lows of Sept. 2015: