November 27, 2015 - Madill Equipment, a Nicholson Manufacturing company, announced the completion and delivery of the first Madill 172 tower yarder to be manufactured since 2006. The announcement follows news in June earlier this year when Nicholson announced completion and delivery of the first 124 swing yarder to be manufactured in Canada since 2007.

“Forestry yarders have been the hallmark of the Madill brand since the 1950’s and we are very proud to be back in the yarder business and manufacturing these machines at our Sidney B.C. plant” said Doug Jeffrey, president of Nicholson Manufacturing, the parent company of Madill equipment.

The S. Madill company first introduced forestry yarders in the 1950’s for logging steep slopes in British Columbia. Cable logging, as it is also referred to, consists of a swing or tower machine which uses a system of cables to pull logs from the stump where it is cut, to the landing where it is loaded on trucks. Cable logging is still very common today in British Columbia, the Pacific Northwest of the U.S., New Zealand, Australia and Chile.

“Completing the 172 tower yarder marks another significant milestone for us as a local manufacturer and employer,” said Jeffrey. “Demand for our yarders is strong and we have already taken orders for new machines in Canada, the U.S., New Zealand and Australia. Our first 172 tower was delivered in August and marks the first of three tower yarder orders we are fulfilling, and we have also taken additional orders for our 124 swing yarder. With the addition of yarders to our product line, contract loggers and forestry companies now have access to a broader range of Madill purpose built forestry equipment, ensuring the most efficient and productive operations for today’s logging environments.”

About Nicholson Manufacturing
Nicholson Manufacturing, the world’s leading manufacturer of ring debarkers for the sawmill industry, acquired the assets and IP of the Madill forestry brand and began manufacturing the machines in Sidney B.C., in June 2011. Since that time over 100 log loader and feller buncher machines have been manufactured at the Nicholson facility on Galaran Road in Sidney B.C., and in 2015, swing and tower yarders were added to the Madill product lineup. 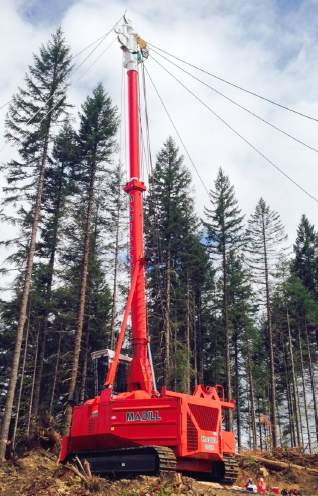