The mountain pine beetle (MPB) is jamming and breaking material in most BC Interior mills, but the sound is far from a song and dance for mill managers.  Rather it translates into a production problem, a safety issue, and board loss. Mill managers are watching wood that is carrying the combined cost of stumpage, harvesting, hauling and yard storage shatter before their eyes. 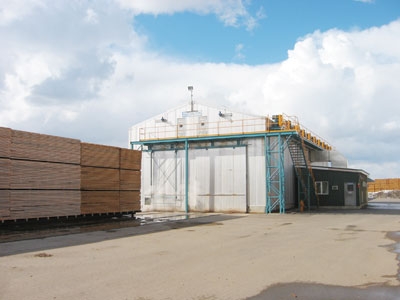 Mill personnel say the jamming and breaking happens all through the mill – the debarker (bark sheets or smaller logs ripped apart), primary breakdown lines (pieces jammed in the saw box or splinters jamming saws), and at the edgers and trimmers. It can be as simple as edging and trimming snipping the last piece holding the board together, or a board that is dropped from one transfer to another, or into a bin, and breaking apart. Then, there is the downtime to clear out the mess. It adds up to the high cost of handling MPB wood.

“It is an every day and all day thing,” says quality control supervisor Paul Sheck at Canfor’s Quesnel mill. “You can walk through the mill at any time during the day and see a piece on the deck or guys throwing a piece out.”

Sheck is not alone. Broken wood and jams are a constant problem, so that after years of trimming manual labour, having two men in front of the trimmer with pike poles in Interior mills is becoming standard, as they do what Sheck calls “spear-fishing – and the guys get quite good at it”.

While mill managers point to shake as a major culprit, Sheck says there is another problem. “Where you have blue stain, it absorbs more moisture than other parts of the log, and it tends to rot faster,” he says.

Many Solutions
Interior companies have developed low- and high-tech strategies to try to deal with breakage and jamming. In the woods, companies now focus on getting the right fibre to the facility to get the right product. Essentially, it means mating log species, size, and quality to the facility.  This has led to two underlying questions about the best way to handle beetle wood. 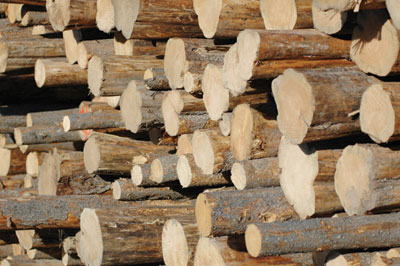 The first is whether tree-length or cut-to-length (CTL) is the best way to go. Studies indicate that shorter lengths are not as prone to breakage, but shorter logs dry out faster. Mill personnel differ on the best option in the Interior region with much hinging on season, hauling distance, and the number of times logs are handled. Feric found in 2006 that breakage is estimated at 11% higher in MPB trees that are four years into an attack versus green trees.

There’s another twist. Canfor’s Sheck says his division is now looking at sorting green from dead wood in the bush. Such batching of wood brings both pros and cons to the milling of each. Sheck said there is some benefit in running 100% MPB wood in a mill. Mills may be able to use smaller target sizes with all MPB wood, as it allows a shrinkage factor of just 2% versus 4% with green. “You lose a bit from the quality of the fibre (and loss due to breakage), but you pick up some of that loss by cutting smaller. This only works in mills that are running 100% MPB wood.”

In November 2007, FP Innovations Forintek published a Technote on improved ways to improve sawing efficiencies in MPB wood. “With regard to the saw design, tests showed that saws with the minimum number of teeth should be used,” the note advised, adding that they also used the least horsepower, were able to run at the highest feed speeds, and provided the best cutting accuracy. The Technote also advised that saws should be run with a minimum side clearance as this increases recovery and tests showed that a side clearance of .005” per side produced good cutting accuracy at a feed speed of 650 feet per minute. Of course, setting saws for MPB assumes you won’t be sawing a large portion of green.

Carrier Lumber in Prince George was running 100% MPB wood a year ago, tells yard and kiln superintendent Nelson Malcolm, but went back to mixing in green wood. “The fall down is so high, you can’t really run straight beetle kill. What we saw was the quality of the lumber dropping,” he said. This was important to Carrier, which has built a reputation on providing a quality product, and was not eager to see that reputation eroded. “By mixing in more green wood, you can keep the standard up.” In many cases, it is an appearance issue, as consumers come into commercial lumberyards and by-pass the blue-stained or lumber with checks.  The structural integrity may still be there, but consumer skepticism eventually trickles back to the distributor and mill.

Malcolm said the fibre loss came not only from broken logs and lumber going into the chipper, but also in an effort to keep a quality product in the market. “We found that because of shake or something in the wood, it would still have made a No. 2 or better grade, but we were telling graders to put some of these into No. 3s,” he said.

Some lessons have been learned. Malcolm said Carrier has found that when stacking its CTL wood, it tries to pack those logs in the yard as tight as possible. This tended to reduce the moisture loss during storage. Also the mill has a newer Coe Newnes McGehee (CNM) edger with saws (rather than a chipping head system), which seems to be easier on the lumber.

Since returning to the mixing of green and dead or dying logs, Malcolm said there has been an impact on the kilns. Drying has become critical because of the different moisture levels, and the presence of very dry dead wood. Malcolm says that five years ago the company purchased its first Wellons dry kiln, which allowed them to close vents and add mist to the kiln. MPB lumber can be conditioned, with the drier wood soaking up moisture faster than the pieces with the higher moisture content. “We weren’t milling as much beetle wood then, but we thought it was a good feature,” he says. Today, the company has replaced two of the three old dry kilns with similar Wellons kilns, and added two additional Wellons units.  By conditioning the wood, he says, there is less degrade through over-drying of the dryer pieces.

Sorting Dry
Mark Evarard of Tolko Industries Ltd. Creekside division in Williams Lake has taken another approach. The division runs a mix of wood, using MPB wood and green material during the winter, and then moving into mainly higher elevation MPB during the summer months. At the drying phase, Evarard said, “we are doing the reverse of what we used to do”. At one time, the balsam was the culprit wet wood, and was sorted out of the general mix of wood going to the dry kiln. Now, says Evarard, the moisture-sort at the mill is taking out those pieces of lumber that are drier. This separation allows for more uniform drying loads, and less degrade. There is a cost-saving in drying the MPB wood for less time, but Evarard says that “you have to be meticulous” about its treatment and still meet heat treatment requirements demanded.

In addition, says Evarard, the sawmill has attempted to limit the jams that occur from broken pieces on transfer decks by putting in more chains. “What we did on our unscramblers and conveyors was try to close the gap between the chains,” he said. Broken pieces do not fall between the chains and cause problems, but can be carried off to planned drop outs. More drop-outs were also added, giving the opportunity to rid the system of downstream jams. More trimming is being done and there’s more culling before the trimmer, he says.

Scanning Green
New scanning technology is also being used to prevent breakage or flow problems. BioScan, a CNM solution, has been adopted and is being beta tested at West Fraser’s Smithers operation. It is essentially a means of visually scanning the board before edging occurs, so that removal of the wane wood does not accelerate disintegration of the board. In February, a bolt-on version (an upgrade to CNM’s existing transverse scanners) also went into beta testing at Canfor’s PG sawmill.

CNM’s Rob Seaman, says “the same product is being used for two different markets” – mills with traditional log supplies are using the transverse system to capture high grade values, while Interior mills are using it at edgers and trimmers to minimize the production impact of shake.

While the BioScan beta-test figures at West Fraser’s Smithers mill are confidential, Seaman is able to say that “there is a substantial return on the edger”.  The system provides for the ability to rapidly cut out defects and find the good fibre. It essentially “stops the bleeding” and “minimizes losses” he says, especially when trying to find edging solutions for larger and more valuable flitches.

The bolt-on BioScan is being marketed at “our existing customer base” says Seaman, adding that it is adaptable to both a trimmer and edger. The first bolt-on installation at Canfor’s PG sawmill is a trial. Canfor’s Tim Burnham, manager of capital projects and technology for Canfor, said in January that the jury is still out on the bolt-on, which was to begin running in February. Initial tests have shown that it will provide an uplift in recovery.

“Theoretically, there should be a pay-back,” he says, but as Canfor was not invited to view the beta test for the BioScan installation at West Fraser’s Smithers operation, Burnham says there is still much to be learned.  It is also just one of the pieces of technology that Canfor is working on at its mills to reduce board breakage. “There is quite a bit more we are working on at other sites too,” he said.