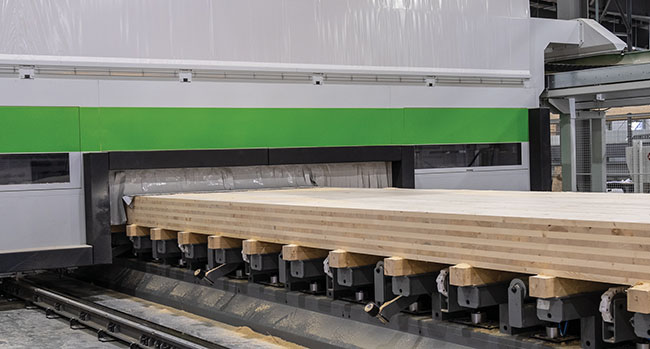 Once panels go through the high-frequency press, they travel into a CNC machine from Uniteam/Biesse, where they are cut to size and additional machining is done. Photos courtesy Kalesnikoff Lumber.

In March 2019, B.C. Premier John Horgan announced the province would be the first in the country to allow the construction of tall wood buildings up to 12 storeys. Shortly thereafter, Kalesnikoff Lumber, a fourth-generation family-owned company based in Castlegar, B.C., announced it was investing $35 million to develop a new mass timber facility, which came online this summer.

Kalesnikoff has a long history of focusing on value-added products, so moving into mass timber was the next logical step for them, Andrew Stiffman, Kalesnikoff’s senior business development manager, tells CFI.

The company got its start in 1939 when brothers Koozma, Peter and Sam Kalesnikoff began logging on the mountain-side. In the late 1960s, the company grew into a custom sawmill, and then added dry kiln and planing capacities. Kalesnikoff expanded again in the late 1990s with a remanufacturing plant that today produces lineal pattern products such as moulding, siding and interior paneling.

Then in 2014, Chris Kalesnikoff, COO of Kalesnikoff Lumber, and the family began looking to expand the business into mass timber.

Like many other sawmills in B.C., they were looking to do more with the available fibre supply.

“Timber supply is one of the biggest issues that we deal with on an ongoing basis, and that’s part of the reason why it was so important for us to continue to grow our business downstream,” Chris explains. “We have a comfort level with the amount of timber that we can harvest every year, and for us to continue to grow and stabilize our business, we needed to do more with the timber supply that we had.”

But choosing to get into mass timber was not something they took lightly. First, they visited mass timber facilities and equipment manufacturers across Europe to get a better understanding of the process and how to manufacture different mass timber products. They also researched the state of the North American market to understand what opportunities were available to them.

“Then, we took a step back to try to understand what was important for us,” Chris says. “We wanted to embrace technology; we wanted to look at new ways to produce mass timber products and we wanted to make sure that we were bringing product to the marketplace to help mass timber growth in North America. This meant ensuring that we were bringing new sizes and species to the market, and understanding some of the limitations around the building code and fire regulations.”

‘Leading-edge technology’
After developing a business plan and finding suppliers for the equipment, construction on the mass timber facility began in 2019. This allowed Kalesnikoff to take full advantage of the change in the 2020 National Building Code allowing 12-storey mass timber buildings.

Kalesnikoff acted as their own general contractor on the project. The state-of-the-art equipment is housed in a prefabricated steel building – a Behlen building – from NorSteel Building Systems. Local contractors provided the different building materials and did the electrical work.

The 110,000 square-foot building houses both the glulam and cross-laminated timber (CLT) product lines. In designing the two core product lines, Kalesnikoff identified six European equipment suppliers who they felt were “really specialized in a certain piece of equipment and brought the expertise we were looking for,” Chris says.

This allowed Kalesnikoff to order the pieces of equipment that would work best for them.

Denmark-based Kallesoe Machinery was the main equipment supplier. The company supplied the high-frequency (radio frequency) press, which can handle pieces up to 18 metres long and is able to produce a large number of products in a short amount of pressing time.

Kalesnikoff turned to Ledenick, based in Slovenia, for their lamella and beam planers, and Microtec supplied a Goldeneye 501 Quality scanner with vision defect scanning and optimization. Two CNC machines came from Uniteam/Biesse, based in Italy. A 12-foot-wide sander was supplied by Costa, also out of Italy. Kalesnikoff’s glue applications systems were provided by German company Oest, while Finnish company Konecranes supplied a 15-tonne overhead crane.

Kalesnikoff chose these suppliers based on their experience touring mass timber facilities and visiting equipment manufacturers across Europe in 2014, Chris explains.

“We felt that these groups were on the leading-edge of the technology that we were looking for, and relationship-based – that was a big part for us,” he says. “Kallesoe is a third-generation family-owned business out of Denmark, so right away there were lots of strong ties. It was really about making sure we were investing in leading-edge technology and that we felt we were going to be supported and partnering with the right groups.”

Installation and commissioning of the new equipment went well since much of the machinery is factory test-run, which means it’s already operational before it arrives on site, Chris adds. 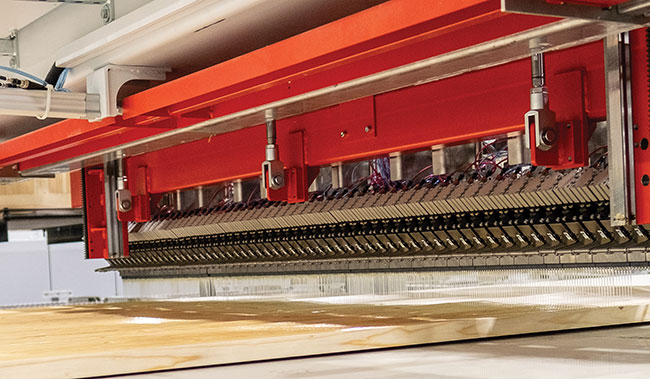 Step-by-step
Now that the facility is complete, the company has begun producing a range of mass timber products.

But how exactly does the lumber from Kalesnikoff’s sawmill turn into these products?

At the sawmill, the lumber is strength-graded and sorted by species. The lumber then goes to the mass timber facility, where it first goes through the finger joint line. Microtec vision scanning technology scans the products for defects and an automated cross-cut line cuts out the defects. Then the product is finger-jointed to the required lengths, up to 60 feet.

The wood then goes to four curing trays, which provide up to 100 metres in total storage. There, the product is sorted by grades and sizes, and allowed to cure.

From there, the product goes to one of two lines, depending on whether Kalesnikoff is producing CLT or glulam.

“It’s just a continuous process where you’re applying your long lamellas and your cross lamellas to build whatever panel thickness you’re trying to achieve,” Chris explains.

After that, the panels travel to the high-frequency press from Kallesoe, where they are cured in segments in a lineal fashion. Depending on the specifics of the project, a panel might then go to the 12-foot-wide Costa sander to be sanded on both faces and then packaged for delivery, or in-house fabrication or coatings are applied first.

For the glulam products, it’s a pretty similar process, Chris says. The product is stored in the curing trays and then goes into a high-frequency glulam press. Once the beams come out cured, they are cut to length and planed on all four sides. A visual grade is then done and any necessary repairs are made. The beams then go to a CNC machine for further detailing, sanding, or coatings as needed. They’re then packaged and ready to go to the job site.

Once the plant is fully operational, Chris expects the facility will be able to produce 50,000 cubic metres of finished product a year, with the capacity to expand upon that.

“That’s the equivalent of 20-plus Brock Commons-type buildings a year,” he says.

The company plans to add a second shift to the facility by the end of the year, so Chris expects they will be fully operational by the middle of next year.

Currently, Kalesnikoff employs 170 people at both their sawmill and mass timber facility, and is “continuing to grow at a pretty rapid pace,” Chris says. The sawmill runs two shifts, although they are not at full capacity.

Panels travel to the high-frequency press from Kallesoe Machinery, where they are cured in segments in a lineal fashion.

Sawmill integration
But how does the company’s sawmill work with the new mass timber facility?

The sawmill, which consumes around 300,000 cubic metres of logs annually, has been upgraded multiple times over the years to prepare for the new facility.

“We made some key investments starting in 2012. We did a large sawmill upgrade modernization where we included more vision scanning that allowed us to cut more skews and different sizes,” Chris says.

“We’ve also invested in more dry kilns capacity. Dry kilns are probably the thing that’s most valuable to us in our timber, so we invested in additional hot water kilns. Then we invested in more technology in our planer, again around vision scanning, that allowed us to create new custom grades that we’d be able to utilize at our mass timber plant.”

For the sawmill modernization, Kalesnikoff turned to USNR. Muhlbock did the dry kiln upgrades, and Springer-Microtec did the planer upgrades.

The sawmill itself consumes more than 10 different species of trees, primarily Douglas fir, large spruce, lodgepole pine, white fir and hemlock. Logs range in size from four-and-a-half inches to 40 inches, although the average is around 12 inches.

Japan is Kalesnikoff’s biggest solid wood market, followed by North America. The company has been producing lamstock for domestic and export markets for more than 20 years. The sawmill also produces dimensional lumber, ranging in size from 2×4 to 2×12, along with one-inch products.

An evolving market
Overall, the response to Kalesnikoff’s entrance into mass timber has been “overwhelmingly positive,” Andrew says.

“We knew that it would be exciting, that people would be excited about it, but we couldn’t possibly have predicted how great and successful it’s been already.”

In fact, Kalesnikoff already has multiple projects set to be delivered at the end of the year and the first half of 2021, such as a multi-family residential building in Vancouver and a student residence in Toronto.

And Kalesnikoff does not plan on stopping anytime soon.

Chris also believes that the mass timber industry in Canada will continue to evolve.

For this to happen, however, the market needs to grow. With the supply currently available in B.C., there is enough capacity between Kalesnikoff and fellow B.C.-mass timber producer Structurlam to handle the projects, Chris says.

“There needs to be some continuous growth for mass timber to really take on more of the B.C. timber availability,” he says.

But both Chris and Andrew see the mass timber market growing in the coming years, which will bring multiple new opportunities.

“It seems like there’s an incredible amount of interest in the market,” Andrew says. “We would love to see the growth and the actual uptake just be exponential for the next five to 10 years.”