Sometimes to be successful in tough economic times, you have to maximize production with the assets you have at hand, while minimizing capital spending. That’s exactly what the management and staff at EACOM Timber Corporation’s Elk Lake sawmill in Elk Lake Ont. have done, and it seems to be paying off for them as unlike many other Ontario mills, Elk Lake has made it through the last couple of years unscathed in the shutdown department. 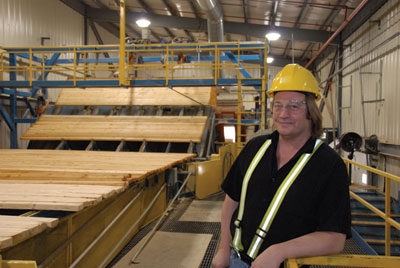 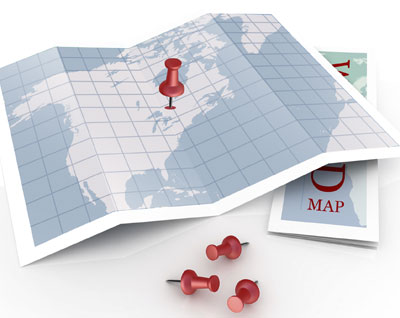 Mike Jorgensen, the facility’s general manager, gives credit to the mill’s dedicated employees, its fibre basket and its state-of-the-art planer mill for much of the positive track record. “We have a great crew and we have consistently operated three shifts in the sawmill,” he says. “That’s only been possible because we have a good fibre basket and a very efficient planer. Our fibre basket is close to the mill, has a decent volume and provides us with an average stem size of 8 to 8.5-inches, and with some hard work on the part of our log supply staff and our committed group of logging contractors, we have been able to bring enough wood across the scale to continuously run the three shifts we need in the sawmill.”

That three shift operation has been necessary to keep pace with the complex’s highly efficient planer mill, which currently runs on one shift. It was built in 2005 after a fire destroyed the old planer mill. “In our overall production, the new planer mill helps compensate a bit for our older sawmill,” explains Jorgensen, while hinting that the sawmill may see some upgrades once the lumber markets improve.

It’s not that the sawmill hasn’t been updated. It has had a number of tweaks and changes over the years, it just hasn’t been completely rebuilt as a major project, although you wouldn’t know it as there is not much left of the original equipment. When it was first built in 1965, Elk Lake was only a planer mill and was a cooperative facility used to dress lumber for the sawmills of the facility’s two owners at the time, Grant Lumber Co. Ltd. and Liskeard Lumber Ltd. Three years later, in 1968, they added a two-line sawmill at Elk Lake, including a carriage and the first chip ‘n’ saw installed in eastern Canada. The carriage was replaced in 1974 with a V-Head saw line, which was subsequently replaced in 1988 with a second chip ‘n’ saw with an 8-inch vertical double arbour edger. Other changes, all of which occurred in the 1990s, included a new trimmer optimizer, a new stacker, two new debarkers, and a new curve sawing canter/edger to replace the original small-line chip ‘n’ saw. They even replaced the building in 1998, but since 1999 when a new chipper and a vibrating conveyor belt were installed, Jorgensen says very little has happened in the sawmill in terms of capital projects. 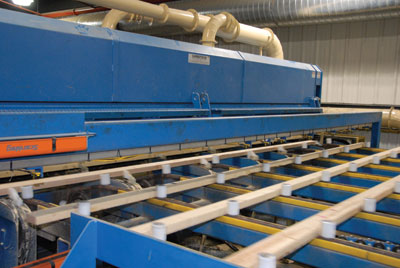 “We have kept upgrades in the sawmill to a minimum over the past few years,” he notes. “Although we did do some work in 2007 when we added a new 17-saw trimmer from Comact, scanning technology from LMI and a new lug loader from PLC. Our old trimmer only allowed us to trim in 2 ft. increments, while the new one lets us trim in 1 ft. increments. We have also done some smaller projects, such as installing a new Comact step feeder in 2009 in front of our canter line.”

Today, the mill flow starts in the log yard where all logs arrive by truck. Three trailer-equipped Liebherr log loaders unload the incoming trucks and either move the logs to inventory, which is sorted by species, or deliver the logs directly to  the mill where a Tanguay loader places the logs into the sawmill’s primary infeed. About 80% of the logs going into the mill are tree length, and they are processed through a slasher (cut off) saw before going to one of three sort decks. The balance of the incoming logs are cut-to-length (CTL) and these logs enter the mill at a secondary infeed located after the slasher saw. All of the logs are then processed through a 22-inch Nicholson A5 debarker or one of two 18-inch Carbotech International debarkers. From the three debarkers, there are numerous options, including a log sort line which scans for diameter, the small log line, which is equipped with a Comact canter for logs smaller than 7-inches in diameter, or the large log line, which has an Optimal chip ‘n’ saw and can handle logs from 5-inches to 18-inches in diameter.

Next in line is the trimmer, which takes boards from both processing lines and is fed by a double unscrambler and the new PLC lug loader. Scanning and optimization on the trimmer is done with a DynaVision Chroma Scan 3100 scanner from LMI Technologies in Delta, B.C. A “smart gate” then sends any boards needing re-edging back to an edger while directing short boards to a recovery deck where they are hand pulled. Everything else goes to an older 42-bin Hemco push sling sorter and then a Scierie Denis stacker with a secondary lift.

From the sawmill, packages are either sent to the mill’s green lumber yard, or are hot loaded into one of three double track kilns – an older Hemco model or one of two Cathild models. A Konus system supplemented with a diesel powered volcano runs the kilns and heats the mill. Forklifts from Caterpillar and Volvo move the packages around the yard and feed the planer, which has a Carbotech tilt hoist that can handle two packages at a time. A Glibert-Tech 2500 planer is next in line, followed by an Autolog linear grading system with an Autolog UV printer and two human graders. A PLC lug loader feeds two Carbotech trimmers – a 17-saw double end trimmer with a cut-in-two option, and then a 6-saw precision end trimmer. Next in line is a Samuel bar code system, which applies bar codes for the mill’s box store customers, and then a Carbotech grade stamper, a Carbotech 75-bin double bundle push sorter, a Carbotech double lift lumber stacker, a Samuel strapper and a Pelliko automated wrapping station. The finished packages are then either put into inventory or loaded onto trucks for shipment to customers.

One minor change Elk Lake recently completed that is improving efficiency is a new “end of run” system in the sawmill. “Because we run lumber for both EACOM and Liskeard, we were ending up with a lot of part bundles, so we went to Autolog and asked them to write a program for us that would send a message to the trimmer telling it how many part bundles are left for each length,” Jorgensen explains. “For example, if all of the 16 ft. bundles are full then the trimmer would receive that message and start cutting 14 ft. lengths and then 12s, etc. It’s very efficient and the trim ends are used for finger joint blocks or chips.”

Jorgensen arrived at the Elk Lake mill in December 2008 after spending 28 years in Houston, B.C. for Canadian Forest Products Ltd. (Canfor) and Northwood. He wasn’t around for the planer project, but kiln supervisor Larry Lamoureux, who has worked at the mill for almost 30 years and looks after quality control at Elk Lake, played a major role in the project. “Domtar had a really good relationship with its suppliers so they were able to have them work together on this project,” he notes. “For example, Carbotech and Autolog worked very closely on the project. Carbotech supplied  much of the hardware and did the installation work, while Autolog supplied the linear grading system and did all of the programming. Of course, Gilbert-Tech was also intricately involved as they supplied the planer along with its infeed and outfeed.”

Lamoureux says the learning curve in the new planer mill was fairly steep because of all the technology, but he adds that with some teamwork they were able to work through the start-up and get the results they wanted. “The suppliers came to Elk Lake to do some training and then we sent some of our guys to other Domtar mills in Quebec for training as several of them had similar equipment.”

One of the biggest challenges Lamoureux says they faced was with the transfer of information. “The planer is rated for 2000 fpm but we run it at almost 2600 fbm and the computers couldn’t transfer the information fast enough,” he explains. “We ended up installing seven computers with each computer handling one board. After seven boards the first computer is ready to handle the eighth board and the cycle starts again.”

With the current shift structures, the Elk Lake mill produces about 160 million BF of lumber annually. In terms of products, they run from 1×3 to 2×10 in lengths between 8 ft. and 16 ft. Including hourly employees, management and administration personnel, and forestry staff, the mill employs just over 140 people.

The Elk Lake facility has also experienced a number of ownership changes over the years, although, one of the current owners, Liskeard Lumber has been involved from day one and even now, they still own 33% of the mill. Grant Lumber and Liskeard Lumber ran the mill together until 1995 when E.B. Eddy Forest Products purchased Grant’s share. In 1998, Domtar Inc. acquired 67% of the mill and continued to partner with Liskeard until this June when Montreal, Que.-based EACOM Timber acquired the forest products business of Domtar. Along with the 67% of Domtar’s ownership in Elk Lake, EACOM acquired four other former Domtar mills in Ontario and three sawmills and a remanufacturing facility in Quebec. The acquisition price for the business was approximately $127 million (including working capital of almost $47 million) and Domtar received over 48 million shares in EACOM, giving them an almost 12% share of the company. The new company will have a total capacity of almost 900 million BF of wood products, and harvesting rights to approximately 3.5 million cubic metres of timber, making them a major lumber producer in Eastern Canada .

The transaction should be a big plus for the former Domtar wood processing plants, including Elk Lake, as the new owners are focused on the solid wood side of the business, while Domtar was primarily focused on pulp and paper. John D. Williams, president and CEO of Domtar Corporation said in a press release that all of Domtar’s forest products employees, and its management team will transition to EACOM, while adding that EACOM “will be a focused, well capitalized, standalone operation dedicated to the manufacturing of solid and value-added wood products.”

EACOM’s president and CEO Rick Doman, also stressed that EACOM will focus on the solid wood side of the business. “With this acquisition we pursue our vision of becoming a major softwood lumber producer and we look forward to integrating Domtar’s leading wood products management team to ensure a smooth transition.”

Elk Lake’s Jorgensen says it’s “business as usual” at the mill with the new ownership in place. “Domtar was great to work with but we are really looking forward to some new opportunities under the direction of EACOM,” he says. “We will continue to watch our costs and we will keep looking for ways to improve productivity without spending capital.”

It’s a plan that has worked for the Elk Lake mill to date and they don’t see any  reason it won’t work going forward as Jorgensen and his crew patiently wait for the markets to improve.