New Brunswick brothers Bill and Ron Gillespie starting tinkering with equipment at the ripe old ages of 14 and 13 respectively. Back then, they would use whatever they could find and adapt it to meet the current market conditions and demand. Some things just never change. 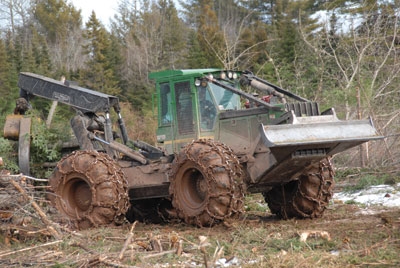 New Brunswick brothers Bill and Ron Gillespie starting tinkering with equipment at the ripe old ages of 14 and 13 respectively. Back then 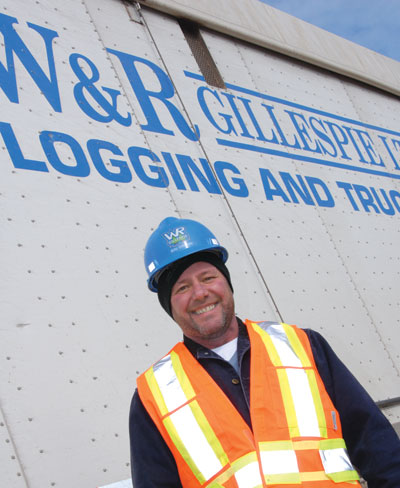 “It was 1977 and we bought an old snowmobile and put the hood of a ’55 Chevy pickup behind it with a tow bar,” recalls Bill from his Harvey, N.B. office and shop, which is located just across the highway from the family home where he and Ron grew up. “We used that setup to pull 4-ft. pulpwood and 6-ft. cedar out of the bush as a way to earn some extra cash after school. The cedar went to a local sawmill in Harvey and the pulpwood ended up going to Maine.”

As the brothers approached their late teen years, the stakes got a bit higher as they moved to cutting salvage wood on Georgia Pacific blocks. “We were entrepreneurial right from the start,” Bill adds. “We had an agreement with GP that allowed us to go into the block after they were done and we would bring out the salvage wood by hand and then buck it at roadside. We could do about 20 cord per day and it was a great way for us to start out in the business.”

After leaving high school in the early 1980s, Bill picked up a Timberjack 207 skidder, and with Ron’s help after school and on weekends, the pair went to work for GP picking up stumpage wood. “We would go along behind the mechanical operations and pick up the oversized pine,” Bill says. “We paid stumpage to GP and then we sold the wood to the highest bidder.”

Today’s Business
Today, the Gillespies do things on a much bigger scale. Their company, W&R Gillespie Ltd., has a huge fleet of equipment and upwards of 80 employees on staff, depending on the time of year. Plus they work with a number of subcontractors to meet the needs of their sawmill and chip customers in New Brunswick and Maine.

“The equipment just grew on us,” Bill adds when asked when he started logging in a big way. “We really got going with mechanized logging in 1988 and before we knew it we had four cable skidders of our own and had another four contracting to us. We bought a delimber, then a feller buncher, and then a grapple skidder. It just kept growing.”

Three years later, the Gillespies ventured into the chipping business when they took on a contract for whole log chipping for Georgia Pacific’s pulp mill in Woodland, Maine, which later became a Domtar mill. “We started out doing 30 loads per week and grew that part of the business until we were at about 50% chipping and 50% roundwood production,” Bill notes. “Then in 1996, we acquired a flail chipper that removes the bark, but just over a year later, GP cancelled the contract.”

At that point, the Gillespies downsized and went back to roundwood production, staying out of the chipping game for almost five years. “We waited until 2001 to get back into chipping,” Bill explains “And even then, we took it really slow, processing just tops for the Flakeboard plant in St. Stephen, N.B. We built the chipping side back up from there and today it is a huge part of our business.”

This past winter, Bill says they ran with five separate crews – one for processing and four for chipping. “We had 20 to 40 loads of roundwood going to sawmills every week and the rest of our production was chips,” he notes, while adding that their biggest challenge was dealing with the number of sorts required. “At one point last year we were putting every species in a different pile because we didn’t necessarily know where it was going to end up. Even now, we still have a lot of sorts, and although it  is more manageable, it is still slowing down production. We separate out the good maple and the spruce and fir for Irving Pulp and Paper in Saint John, N.B., mixed hardwood goes to Flakeboard in St. Stephen, and then with the cedar, Tamarac and pine, we sort them into sawlogs and logs for chipping.”

Sorting it Out
Not far from Harvey, the Gillespies have a sort yard where they keep inventory. Bill says this has helped them immensely, especially when dealing with the rapidly changing markets they face today. “The boundaries are constantly changing due to changes in customer demand,” he explains. “We might be chipping for a customer for three days straight, and then we will get a call saying they don’t need any more product for while, so we will have to change gears. Everyone seems to be trying different things to stay afloat, so having a log inventory at the ready really helps us out when it comes to meeting customer needs.”

Even on the chipping side, Bill says the markets constantly change. “Late last year we were chipping for both biomass and pulp production along with some production for panels,”  he notes. “Now, my biomass chipper and my grinder are both sitting idle in the yard as the Biomass Crop Assistance Program in the U.S. is essentially creating a subsidy for U.S. biomass producers, which has made it difficult for us to be competitive when supplying biomass to customers in Maine.”

Equipment Stable
With all of the changes the Gillespies have experienced over the past three decades, they have accumulated a large stable of equipment. Today, on the logging side they have three feller bunchers, including a John Deere 753 and two Tigercat 822 models; nine skidders, which includes two Cat 535 models, four John Deere 748 machines, and three John Deere 648s; three delimbers, including a Case 9040 equipped with a ForestPro head, a John Deere 230 with a Denharco 3500, and a Cat 322 with a Denharco 4400; four log loaders, including a pair of Prentice 210 models, a Rotobec 220 and a Serco model; and a mix of 20 trucks from Kenworth, Peterbilt and Freightliner.

For processors, the Gillespies work with M&R Plourde, who is a subcontractor running a pair of Case 9030 machines with Ultimate processing heads, a Tanguay slasher, and two John Deere Skidders. 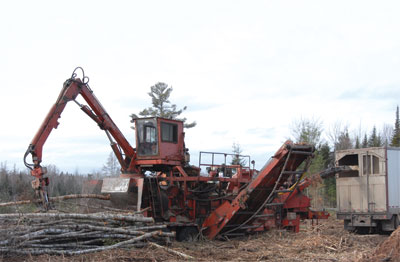 On the chipping side of the business, the Gillespies have a Morbark 2455, three Morbark 2755s, a Morbark 30-inch whole-tree chipper, and a CBI 6800 grinder. For moving the chips, they have more than 30 trailers, which are hauled with the company’s 20 trucks along with another 15 contractor trucks.

Large Shop
To keep all of the equipment in top shape, the company runs a four-bay shop that is about  6,000 sq. ft. in size, and has a 1,200-sq.-ft. parts room. Nickey Gillespie, who is the younger brother of Bill and Ron, is a mechanic and runs the 10-person shop, but he’s not the only family member in the business: the boys also brought their Dad, Robert, into the mix as an equipment operator, but Bill says he takes on other roles whenever needed.

Going back to their roots of tinkering with equipment, the Gillespies have recently been experimenting with a project that saw them convert a dangle mount processing head to a fixed mount head. “We use the waste from roundwood for biomass, so we are processing at roadside,” explains Bill. “We worked with Meductic Welding near Woodstock, N.B., and took a John Deere 2054 with a Waratah dangle head and made it into a fixed mount, which gives us improved handling for piling the logs. It just gives us more control and speeds up our process, and we can do the conversion for a much lower price tag than buying new heads.”

It’s not the first time the Gillespies have adapted equipment to meet market demand, and it’s probably not going to be the last time. It all goes back to the old snowmobile and the ’55 Chevy pickup hood. Bill is the first to admit it hasn’t been an easy ride, especially for the last couple of years. But if there’s a way to adapt and change, the Gillespies will do whatever it takes to get the job done.