Industry News News
‘Making it work’ at the TLA 2019 convention

Dec. 10, 2018 - Wildfire response, hiring the next generation, and handling weed in the workplace are all on the agenda for the 2019 BC Truck Loggers Association (TLA) convention taking place January 16-18 in Vancouver. 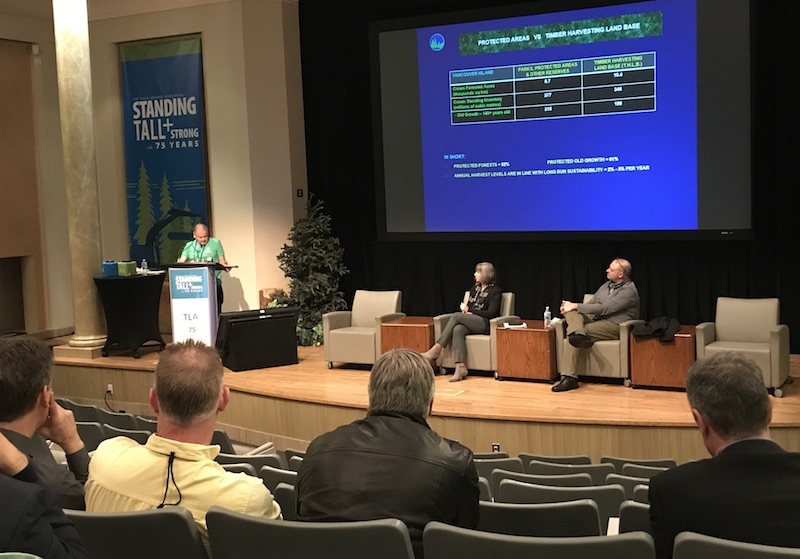 Dick Jones of Teal-Jones Group presents as part of a panel on managing the transition to second growth harvesting in Coastal B.C. at the 2018 TLA convention.

The theme for this year’s convention and trade show is “making it work”, which TLA executive director David Elstone tells CFI is fitting given the current climate in the industry.

“With the challenges we face with changing policies and legislations, markets, and relationships, the contractors that are surviving are making it work somehow, someway. We’re in in for the long haul,” he says.

Earlier this year the B.C. government released recommendations from its highly anticipated Contractor Sustainability Review. Elstone says they are currently in discussions with the province about the recommendations, and hope to have positive changes to announce at the convention.

The role of contractors in wildfire response is likely to be a hot topic at the convention. A session called “Wildfire fighting – what contractors saw and what needs to change”, will discuss contractor observations during the 2018 wildfires in B.C. and how the province can improve its response.

“It doesn’t matter whether it’s the coast or the interior, we’ve heard so many voices concerned about how things were approached and how things could be better if the province utilized the skills and resources of contractors,” Elstone says. “We knew we had to do something about it and one way to do that is have a dialogue at the convention.”

Other sessions will cover:

The TLA convention and tradeshow takes place at the Westin Bayshore. Find more details and register at www.tla.ca/convention.