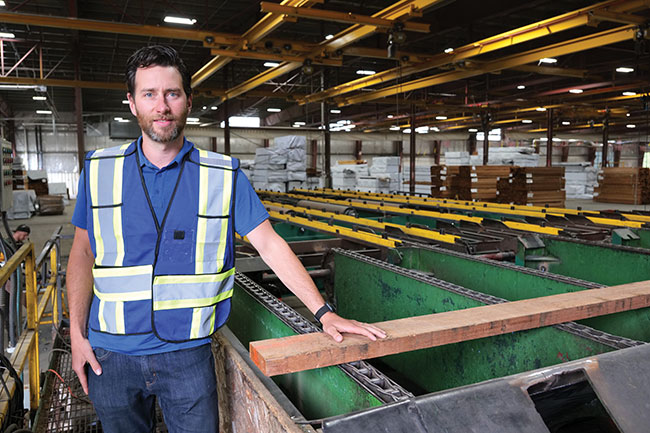 PowerWood Corp. is focused on finding the finest of British Columbia’s fibre resource, and turning it into specialty building products that will last a century and catch people’s attention worldwide.

The company’s new, larger remanufacturing facility in Agassiz, B.C., has them prepped to double their workforce in a year and more than double their output soon after.

CFI visited Jake Power, co-owner of PowerWood Corp, at their new facility as assembly and installation of equipment neared its finish, to talk about the move from Surrey, B.C., their production process, and how they are setting up to make the most of the B.C. government’s reduction in raw-log exports.

The move
Power and co-owner Dustin Elliott had been leasing a five-acre piece of land in Surrey since June 2011, where they were able to grow PowerWood into the specialty manufacturing company it is today. But, over the last few years, the company had grown right up to the edge of what that property could handle.

“We kind of looked around and said, ‘There’s just not enough room here. The buildings aren’t adequate. We are going to have to sink a bunch of money into this property here. The land is super expensive,’” says Power.

“So, a few years ago, we made the decision to let that piece of land go.”

Integral to making the leap to Agassiz was a change in B.C. government policy aimed at promoting the production of value-added forestry products and getting B.C. mills greater access to trees and fibre.

The two orders-in-council amending the Manufactured Forest Products Regulation (MFPR) were passed in January and June 2020, after Power had participated in an industry committee that pushed for the changes.

“We knew that manufacturing in B.C. was going to be an integral part of the provincial government’s plan,” he says. “That really did give us that little bit of a boost to take that decision to invest here [in Agassiz],” with PowerWood closing the deal in December of 2020.

“I think our eyes would have looked south of the border without [those policy changes],” Power says. “Our hearts have always been in B.C., and we’ve wanted to be here. But, without a bit of support, there is just too great of a cost advantage to remanufacturers in the United States with softwood lumber duties.”

The total cost of the move, including installation and new equipment, was $25 million.

Power and Elliott received a big boost to make the move a reality when long-time employees Brian Helem and Stewart Clark agreed to buy into the business. “It wouldn’t have been a reality without Brian and Stew being all in,” says Power.

Power says he is happy with how they’ve executed the move, which took about three months, starting at the end of June 2021.

There have been some let-downs, with some equipment not able to come online as soon as was hoped, and some equipment damaged in the move, costing between $4,000 and $5,000. But, overall, Power says, “You can’t really complain about that as a business owner, and without any major catastrophes along the way.”

All staff are now at the new facility. As of Aug. 26, 2021, most equipment was either running or on the verge of running, with all lumber now stored at the new Agassiz facility.

“So far – knock-on-wood – we are pretty well on budget [and] we’re going to be up and running within 60 days of our original plans,” says Power.

From wholesaler to manufacturer
This new move expands on Power and Elliott’s vision of transitioning PowerWood into manufacturing, after the company’s earlier incarnation under Power’s father, Steve Power, as a wholesaler.

Steve founded the company in 1995, purchasing lumber from mills and selling to American customers, mostly in California, and working out of the family basement. Power was 12 at the time.

“He would turn product over from the mills,” explains Power. “Sometimes he would do his own kiln-drying and some of his own small re-manufacturing, but it was always done through contractors. And then he’d ship it to the U.S. He really built the business on relationships, on treating the product as a service. He really instilled those values on us as the future stewards of the business.”

Purchased in 2003, PowerWood’s Surrey site was meant only to be used as a distribution yard, says Power. “[Steve] never had desires to be a manufacturer,” he says.

However, staff, including Power and Elliott, wanted to start making products. And, with Steve’s blessing, the company slowly started to acquire equipment.

“We’d add a saw here, and then we’d add a little piece of surfacing equipment,” recalls Power. “Eventually, I wanted to start adding lumber dry kilns, and at that point…I wanted to grow and add more equipment, as did Dustin and some of the other members of the company.”

The company was ultimately sold in 2011 to Power and Elliott as a result of the financial crisis in 2008 and Steve’s disinterest in manufacturing.

“[Steve] supported us by maintaining the land and the lease, and some financing to make the sale happen. But really, beyond that, he was very happy to give us the keys and let us run it our way,” says Power.

Since then, the company’s focus has been adding value to B.C.’s fibre resource.

“What drives us is that passion to turn the resource into something that will look spectacular and be a special building product and last 100 years. That resonates from top to bottom of the company,” Power says.

“The thing I always say is, ‘You can tell some companies make decisions that an accountant makes.’ At PowerWood, we’ve never made accountant-based decisions. We’ve always had passion-driven decisions. And that passion is to enhance the resource. And so that kind of brought us to this point this year.” 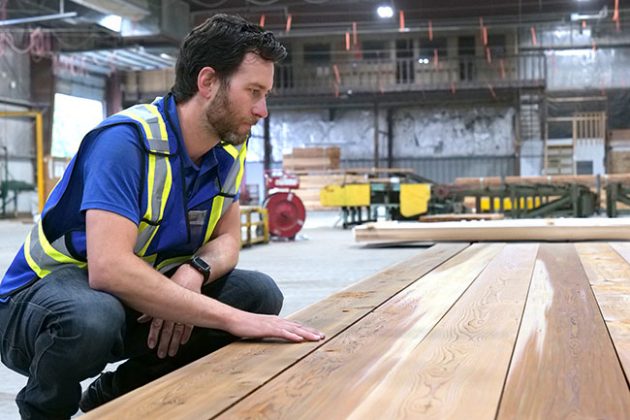 Once it arrives on-site, quality control staff do an inspection and lumber goes through a rough breakout line on a green chain with double-end trim and sort. Yard equipment includes five Hyster forklifts (three H110FT’s and two H155FT’s), and a truck scale.

Lumber then gets sticker-stacked and placed in one of four kilns. Two are Nyle Systems dehumidification dry kilns, built for PowerWood in 2016. They have 40 mbf capacity each. Two are newly-purchased Mühlböck Custom Side Load kilns with 80 mbf capacity each, which will likely be expanded to four, Power says.

Dried lumber is then stored in a large storage tent until the right order comes in, he says.

“That’s really one of the keys with PowerWood…the manufacturing process generally doesn’t start until we have a customer who has basically called that action.

“So, we try not to do too much with the product to pigeon-hole it in one direction.”

Once an order is received, lumber heads to one of two Weinig moulders (either a Hydromat 23 or a Unimat), a Pinheiro Planer Matcher 1000/4, a Cantek resaw and/or chop saw, before being packaged and shipped out.

New equipment to PowerWood’s Agassiz mill includes a fully automated Stetson-Ross 612 planer. This will be key for the company’s more commodity-focused line of products, helping to keep prices competitive as it eliminates processing steps. Their Weinig Hydromat 23 with infeed and outfeed also allows for faster production, while the smaller Weinig and the Pinheiro planer (the latter having a 16- by 34-inch capacity) allow for more custom orders.

This includes supplying the cedar for the London 2012 Olympics velodrome and louvers for the exterior of a New York University building.

In Surrey, PowerWood was producing approximately 10-12 mmbf annually, but they’re planning to increase that output to 25 mmbf annually in the next few years.

The majority of PowerWood’s products are shipped to the U.S., but that makes up a far lower percentage of the company’s output than earlier in its history. Now, customers are also located across Canada, in the UK, mainland Europe, China, southeast Asia, Australia, New Zealand and elsewhere. 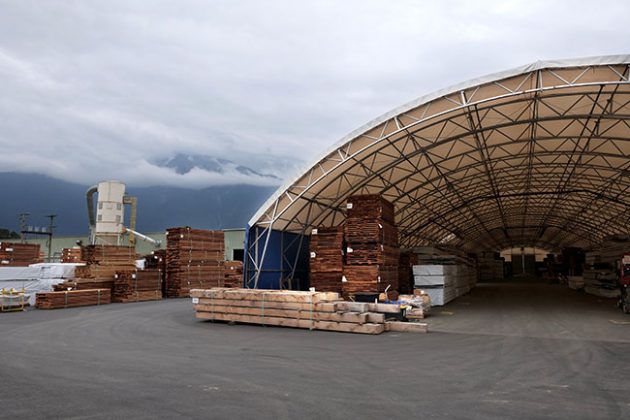 PowerWood’s new facility in Agassiz is allowing the company to expand its custom re-manufacturing business.

Lessons learned
Over the course of PowerWood’s growth and move to their new facility, Power says he feels the company has made the right decisions. But, if he had to do it again, he’d extend the overlapping time where both facilities were running simultaneously for another month or two.

One key to their successful move was having enough confidence in staff to parcel-out responsibilities and not micro-manage their work, Power says.

“If I had done it five years ago, I don’t think I would have been mature enough to pass a lot of that responsibility off, and I would have been involved in managing sales, managing purchasing, managing production…[That confidence] comes from being, as a professional, secure in yourself enough to let go and let those other people do their job.”

Core to that, of course, if having passionate people around you who want to grow and learn.

“We want everyone to grow as an individual and a professional, even if it takes them beyond PowerWood,” he says. “We want people in the industry to know that this is a place to grow and learn.”

With about 36 employees currently, with plans to expand to 60 by this time next year, PowerWood foresees plenty of growth to come – for the company, and for their staff.