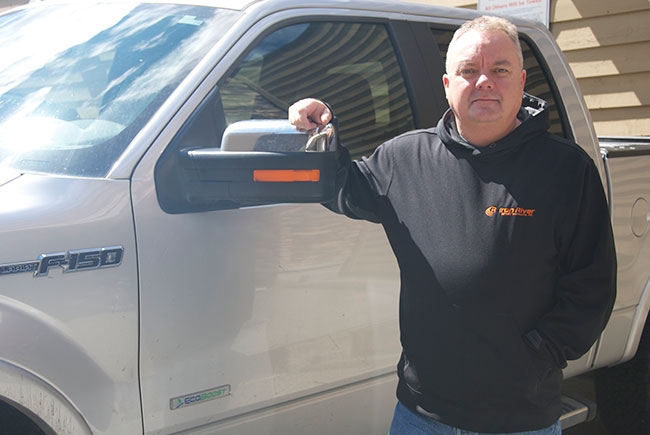 “You have to be able to look at a log and think, OK, I can get wood out of the outside of that, but the inside will be garbage so I have to factor in how much it will cost to cut it, what I’m going to get out of it, and how much that will sell for in the end,” Chalmers explains.

All those decisions he makes in a matter of minutes as he’s walking up and down a dry land on the Sunshine Coast or a boom from Vancouver Island.

“You can’t see inside a log, but you know the areas they come from and you know the companies and the scalers,” Chalmers says.

Chalmers, 49, runs a one-man company called Iron River Forest Products. He sources logs, rents out mills to cut the wood, and then sells it, generally to remanufacturers that will make finished products.

The secret to his years of success is very simple, he says: experience.

“It’s not easy trying to figure out what’s in a million dollars of wood by just looking at it,” he says. “I’ve had 25 years to watch cuts and figure it out. Now these guesses are educated. But I’m still rolling the dice.”

Chalmers experience has also led to relationships, which, with the right log brokers, lead to fibre supply. “They know you’ve got something to give back so you’re not just some guy walking in to buy wood.”

Learning the trade
Chalmers started his career working for a sawmill in his hometown of Cranbrook. He soon after moved to Vancouver to take a wood products manufacturing course from the British Columbia Institute of Technology.

“I got to Vancouver and thought, I could hang out here,” Chalmers recalls.

At 23-years-old he got his first custom-cutting job with Interpac Log and Lumber, a custom cutter and log broker. He began to learn the tricks of the trade, and also learned to enjoy the lifestyle of a custom cutter.

Chalmers next gig was with Sawarne Lumber. He worked there for more than 15 years and became skilled in log brokering and custom cutting. “They’re still like family to me,” Chalmers says.

Ten years ago he and a business partner started Iron Rivers. Chalmers’ partner left the business three years ago, leaving the company to him. About the same time, Chalmers began contracting a registered professional forester, David Byng, to take care of the books and help out with jobs.

“Custom cutting is the most interesting part of the business,” he says. “You get to get into the mill, tell them what to make and make sure they do it properly. I oversee the whole thing.”

Eying wood
Chalmers deals mainly with fir and cedar, but will take on hemlock as well. He sources the logs from other brokers and at times timber sales.

Supply is a constant challenge, he says. Major producers generally keep the logs for themselves and timber sales are becoming more and more difficult to obtain. Large companies will sometimes foot millions in advances to secure wood.

“I don’t have the resources to do timber sales and custom cutting – I’ve done both, but custom cutting makes more money,” Chalmers says. “I’m left to picking at fringe booms here and there and I’ve got enough relationships and contacts over 25 years that if I call a guy and I need something he’ll free something up.”

Chalmers negotiates with the brokers to get the price they both think is fair for the quality of the logs. He’ll work with fibre from as far away as Haida Gwaii. His search will sometimes take him into the bush, right to the source.

“Working with the guys who are falling or logging means you can give them lengths and tell them what you can and can’t get away with; like, ‘I can take that if you do this.’ When they know what I want, it’s better for them, too,” he says.

Another strategy for Chalmers is to trade booms to secure the type of wood he needs for his customers. “Having cash doesn’t mean everything. You need to have the actual logs, because fibre is so short. That’s been the case for the last four or five years,” Chalmers says.

a one-man company based in Vancouver.

Custom cutting
Iron Rivers cuts at Mainland Sawmill, owned by Terminal Forest Products, Delta Cedar sawmill and Halo Sawmill, which is also owned by Delta Cedar. “At Halo they cut everything, fir, cedar, hemlock, whatever you take it. It’s a big log mill so I can cut the large stuff,” Chalmers says. “I cut at Delta Cedar to make decking and siding.”

Cedar is red hot right now on the open market, he says, and customers don’t seem worried about the U.S. duty on Canada’s softwood exports. “A lot of cedar decking and siding goes to Europe. Most timbers go to the U.S.,” he says.

Chalmers pays the mill per thousand board feet to rent the space, but that allows him to be in charge of the production process and tune it to his exact specification. The mills he works with cut about 120,000 board feet a shift so a typical half a million board-feet job will take a few days.

Iron Rivers doesn’t sell to the end user, mainly because Chalmers doesn’t want to tie up his capital in inventory. “It’s a whole other job in itself selling lumber. I couldn’t do it all,” he says.

Expansion, Chalmers says, is possible for Iron Rivers, but it’s not something he’s gunning for.

“I’d like the business to grow, but I don’t think I need to add employees. If I get more fibre supply then I could do it,” he says.

Changing horizons
Over his career the custom cutter has seen the forest industry change to adapt to new challenges. Where there used to be a dozen sawmills in Vancouver, today Mainland stands alone. The rest are custom cut mills.

As for his kind, “There are not many people who do both; you’re either a log broker or a custom cutter. But there are only a handful of custom cutters and there are a lot of log brokers because all you need is a telephone,” Chalmers says. Doing both gives him more access to fibre.

“It’s a fight now, it never used to be. People’s words aren’t as good as they used to be – we used to do a lot on a handshake and it was fine. But now the big guys are getting bigger and getting more wood and the little guys are getting squeezed out.”

More than anything, Chalmers is still in the industry for the lifestyle. As owner and lone staff member, he answers to only himself and is not responsible for anyone else’s paycheque.

“Companies have to cut if they’ve got employees. If I don’t cut for two months, no big deal. I’ll wait. I’d rather not lose money,” he says.

Another perk: when he, his wife, son and daughter go on vacation, Chalmers can take his work with him.

“I figure I’ve got about eight years yet and I’m hoping I can keep going for that long. My business is going strong right now,” he says.

The long-term plan is no plan, Chalmers says, just another educated guess and role of the dice.