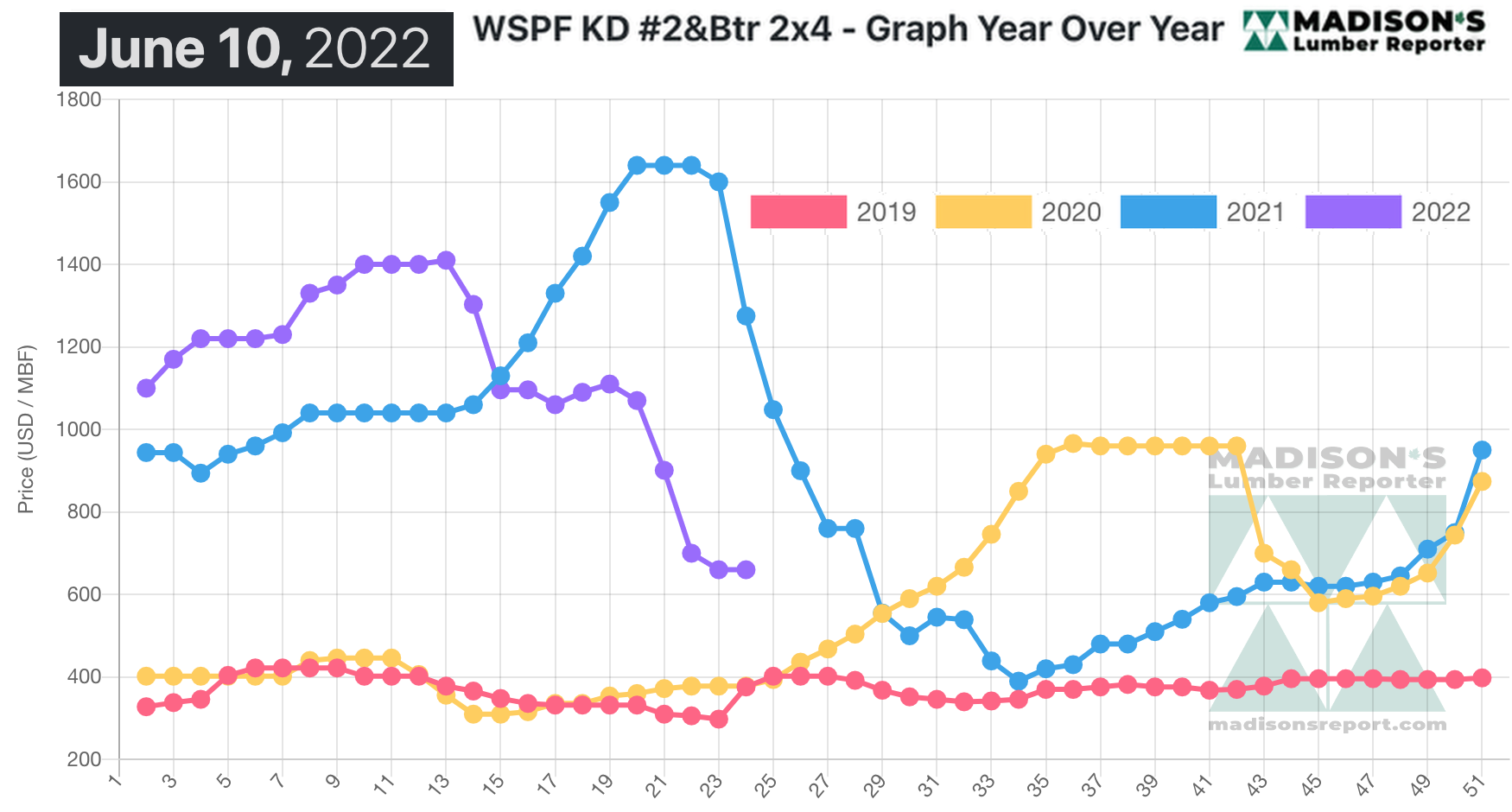 After dropping quite a bit in recent weeks, many softwood lumber prices levelled off in mid-June as a modicum of supply-demand balance seemed to have been reached.

Over the past two years, as the lumber market reacted to big changes in external conditions, there was never-before-seen high price levels and volatility. It looks like the remarkable highs and attendant corrections down might be getting worked out, as these swings are less extreme each time.

This is the usual time of year for construction framing dimension softwood lumber prices to be dropping, as most large-volume builders have received the wood they need for housing projects planned. At the moment the delivery delays which have plagued the forest industry for more than six months seem to be working out; customers are receiving their orders in a more normal time frame.

Staying flat from the previous week, for the week ending June 10, 2022, the price of benchmark softwood lumber item Western Spruce-Pine-Fir 2×4 #2&Btr KD (RL) was again US$660 mfbm, said weekly forest products industry price guide newsletter Madison’s Lumber Reporter. This is down by -US$285, or -30 per cent from one month ago when it was US$945.

“Sales of panels were particularly rough as market malaise and price drops persisted across all commodity groups.” — Madison’s Lumber Reporter 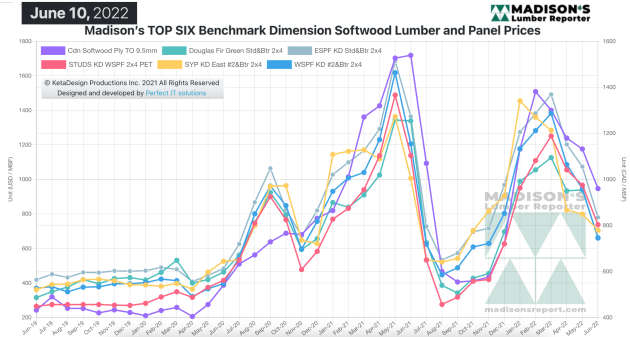 Producers of Western S-P-F lumber and studs in the United States searched fixedly for firm offers. Buyers were largely idle, though an undercurrent of demand was evident among those suppliers who were more open to counteroffers. Sawmill order files were no further than two weeks out, as producers showed more prompt material with each passing day.

Western S-P-F lumber prices continued to vary significantly between print levels, producer asking prices, and actual sales numbers. The overall sentiment was the same as the previous week: profoundly uncertain. Print levels were flat or down a few points while all manner of below-print counteroffers and other deals were happening behind the scenes.

Primary and secondary suppliers crossed their fingers in hopes of the market putting in a bottom sooner than later, while buyers held off as best they could in order to cash in at the nadir. Meanwhile, most deliveries were finally occurring within quoted shipping timelines as subpar sales volumes over the past month or so has eased up that ongoing snarl in transportation.

“Stud Western S-P-F prices corrected again as mills tried to find a trading range that would coax buyers off the fence. Smatterings of business were reported, but most customers continued to sit on the sidelines in hopes of scooping the bottom when it hits.