Sept. 5, 2015 - Volume production is one thing, but in today’s lumber industry it’s value that pays the bills. And timely value production is what Saltair Sawmill is built for.

Western Forest Products is the fifth largest Canadian Lumber Company. Its Saltair Sawmill in Ladysmith, B.C., will be the largest single line producer on the coast of British Columbia when it has completed its current upgrades. But what really sets this mill apart from others of its type is its ability to quickly react to market needs and produce the wood products that make the best margin at the time of production.

In a region with very expensive fibre, it’s essential to extract as much value as possible from the fibre. Logging on Vancouver Island and the B.C. coast is often done by hand because the steep hillsides don’t allow for mechanical harvesting. In some areas, helicopter logging is the only option to gain access to the best fibre. Once that log has been brought into the mill, shifting market trends are taken into account when deciding how it will be cut.

“We’re very opportunistic,” explains Daniel Bowes, divisional manager of the Saltair Sawmill Division. “Although we do forecast for the year, I guarantee you, month to month it’s very different.”

Instead of focusing on volume, Western Forest Products focuses on margin: asking themselves where’s the best return for the wood products it’s able to produce. “I would not have thought we’d be doing what you’re seeing in the mill today four weeks ago,” said Bowes on the day Canadian Forest Industries was at the sawmill in Ladysmith, a small town on Vancouver Island. “Because things changed in Japan – the market came off a little bit.”

A shift in the market demand in Japan means a mill changeover and a change of strategy. “Where does that Douglas fir log go? Is it Belgium, is it Australia, is it domestic, is it Japan? We have our whole business based on value of production.”

Saltair Sawmill
The Saltair operation started in 2007, processing mid-sized logs of three species (Douglas fir, hemlock and western red cedar). Last year, the sawmill consumed 600,000 m3, but, this year, Bowes expects it will consume about 850,000 m3, and next year over a million to produce in excess of 220 million board feet.

“I describe our business as taking all the little parts to slice and dice it to make more money. It’s a lot more work to do that. Package it, no wane, different grades, specifications, chop it into different products so that the value is available for that log. Because our logs are the best logs in the world, and they’re probably the most expensive in the world to log.”

To get the best margin for its products, the mill is set up to make quick switches to reflect market changes. The business model came from a former mill in New Westminster that had a reputation for its flexibility in providing specialty export-grade cuts. That mill’s culture and strategy was adopted at the Saltair Sawmill along with a number of the staff when the mill was shut down. Changeovers are quick and efficient – happening over lunchtime.

Bowes describes the process: “change all your gang stacks, change your sorter, drop and stack all your lumber and everything. Change your grading, and change your mindset. It’s a culture and we brought it here, started this mill, retooled her through the traumatic times of the economy, she ran flat through the economy because we could do that. We could cut a day here, a day there, customers bought everything and we
kept going.”

Ready for a change
If the Japanese market weakens or there’s an oversupply of wood products to that market, the management can decide to shift to products for the North American market by switching to a three- or four- inch cutting to produce 3x12s and 4x12s down to 3x6s and 4x6s. This way, the company is able to avoid oversupplying the Japanese market but rather taking advantage of the U.S. recovery. Any size can be made on a day’s notice.

“It’s quite a fascinating process if you were to watch our mill change over. It takes a real team effort to do it,”
says Bowes.

Retooling from back to front
Daniel Bowes’ passion for the sawmill and its new technology is captivating. Canadian Forest Industries visited Saltair Sawmill during an International Wood Markets’ tour that took a group of industry professionals to several sawmills, a logging site and two ports where we were able to watch the giant coastal logs mounted onto ocean vessels for shipment to Asia. Bowes’s presentation and tour revealed a deep respect for the company and the mill’s unique culture but it’s when he describes the mill’s technology that his excitement is most apparent.

“We’ve spent around $26 million retooling the back end - that’s where her biggest problems were. She got new edgers, new trimmers, new stackers, new sorters, new bottom infrastructure, chippers and conveyors. So she used to have a lot of down time in those areas to handle the materials to stack them and do what we needed to slice and dice the material to get it to what we wanted to do on the finished product. That’s all new. It’s beautiful.”

The back end may be efficient and quick but now it’s the front end that needs some improvements. “The front end is still quite archaic. The bucking line, the bundle lift is a 60-tonne bundle lift, and she comes from a 1962 vintage bucking saw barking system.”

The bucking line is all manual at the moment: “a guy looks at the log, measures the diameter, makes a decision on a complicated matrix that we give the poor guy.”

But part of the retooling includes a full length optimizing system that will scan the logs on the way in and complete the mill’s shift to digital. The new log merchandizer, a Porter Engineering scanner optimizer, will be added to the line in December, making all the decisions on the raw material on its way into the sawmill.

“It’s the last piece of the puzzle for the mill,” Bowes gushes. “She’ll have speed, she’ll have accuracy, she’ll create a model that will drive to the end product at the stacker for a margin positive product.”

With the current manual process, the front end can’t push enough logs through the mill to run it at full capacity but once the optimizer goes in, the mill will be able to go to three shifts.

Once the logs are brought in through the manual optimizing system, they go into a bin and into the step feeder and through the reducer quad (four bands and a chipping head), a line that includes a Porter Engineering scanning system. Two USNR optimized edgers can handle anything from one inch up to 5.5” and from four inches wide to 32” wide.

“We could go 2x4s for the U.S. market or 5x5s for the Japanese market,” says Bowes. “They’ve got seven saws in them so they can just slice up those boards like there’s no tomorrow.”

The grading station is partially manual using mechanical flippers so that the graders can get a good look at both sides of the boards to look for biological defects, but these defects can be detected at high speeds. “The geometry of the piece, the size, the lengths, the wane is all done with optimization. That’s the only way we can run the speeds that we run.”

The graders place a digital mark on the lumber before it goes through scanners for trimming and on to a top fit sorter that can process up to 120 lugs a minute or faster. The sawmill has a unique Samuel inline strapping system that stacks and preps the sawmill’s 300 products for export.

“The stacker controls are very sophisticated. It’s all optimized and we may have different packages going to different packaging specks. We may be kiln stacking one length and may be green packaging for China another length,” explains Bruce St. John, the vice president of sales and marketing for Western Forest Products.

Each load has its own program that is designed to be a specific width and height with stick placements programmed. Sticks are placed flush with the sides to make for easier shipments.

The mill has 121 employees in total and requires only 18 people to operate the sawmill with two maintenance people per shift – one electrician and two sawfilers (who do the sawfiling for all the company’s mills in the region).

Staffing for the future
As Canadian Forest Industries wandered through the mill, there were a number of very young employees. One young woman running the unscrambler had been at the job for only three weeks, while a couple of other young employees were also in their twenties. According to Bowes, there are many older employees at the mill but finding young people for entry-level positions isn’t much of a challenge on Vancouver Island, and there’s no problem with retention.

“We’re finding people are leaving the oil patch and coming here now. They’ve been up there, done that. Their spouses are saying they want to move back to the island where they’re from or a small town.”

The Saltair Sawmill primarily focuses on making posts and beams for the traditional housing market in Japan. The mill is prepared, however, to change its focus to a more profitable U.S. market if the supercycle comes into effect as predicted by market analysts. Flexibility and a keen eye on the market are what determine the finished product. 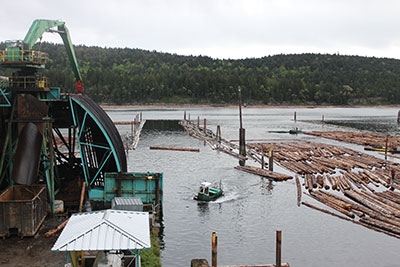 Last year Volume production is one thing
Print this page