April 18, 2016 - For two years Groupe de Scieries (GDS), one of the largest family businesses in the processing of forest products from the Lower St. Lawrence and Gaspé area, has been harvesting timber on Anticosti Island in Quebec to help stabilize its supply to its sawmills in the Gaspé Peninsula, which have an annual consumption of 600,000 m3 of logs. 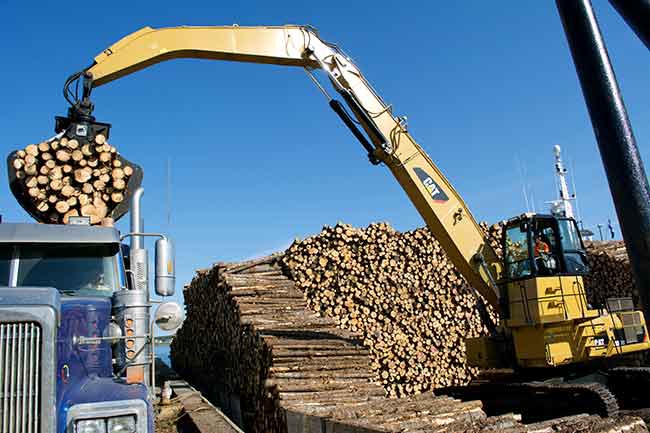 At the end of its first year of operations on Anticosti, the company harvested 75,000 m3, channeled mainly to its sawmill in Grande-Vallée, Que.

“The harvest on Anticosti has several limitations, due to the periods of harvest and transportation,” explains Robert Belzile, vice-president of supply for GDS.

Due to weather conditions, harvesting is only possible from mid-May to mid-September, because all the wood that comes out has to be routed on a barge between Port Meunier and Great Valley, about 75 kilometres away. To cross the middle of the St. Lawrence Gulf is a huge challenge, which is why transport must cease before the start of the fall storms.

“The weather can increase costs by 10 to 20 per cent in one summer alone,” says Steve Leblanc, director of forestry for GDS. And as the barge is rented for the season, the fixed costs must be paid even if the barge remains on the dock.

Belzile adds that finding forestry workers can also be a challenge, since they are required to work on an island, more or less isolated, for 10 days, followed by four days off.

Once on site, the harvesting is done using traditional methods. The real challenge is trying to collect enough volume to fill the barge as soon as it arrives.

“We cannot have the barge wait because it would increase the cost of the wood,” Belzile explains.

For this reason, the company decided to review its harvesting equipment for the second year of operation on the island.

Equipment upgrades
In the summer of 2014, GDS worked with two old outdated loaders that were experiencing significant downtime that was impacting the crew’s ability to load efficiently. To maximize operations, GDS decided to look for equipment that could travel well, and had a long reach to load the timber directly into the barge. The company ended up going with a Cat 330D MH material handler.

The investment increased the operation’s efficiencies immediately. The 330D was able to load as much timber as the other two old loaders combined, largely due to the machine’s maximum reach of 52.5 feet, which allows it to remain on the barge for loading and unloading.

“We have reduced our average total trip time,” Steve Leblanc says. “We had huge productivity gains because we had almost no unproductive time. Given that the cost of fibre is the same as elsewhere in Quebec, logistics need to be maximized to make the operation profitable. With this investment, it takes 28 to 30 hours for loading [and unloading] of 4,500 m3 of timber entering the barge. Then, it takes 10 hours of sea transport. In all, a journey therefore takes nearly three days… if conditions permit.”

Costs were much better controlled in the second year of harvest on Anticosti, but the crop on the island is not assured for years to come.

“We look at this option year after year. It takes a good price to justify the harvest on the island,” Leblanc says. “The experience gained over the past two years, however, allowed us to acquire expertise on marine harvest, an asset in a context where fibre supply is limited.”

GDS recently invested in a Cat 330D MH material handler so it could load harvested timber directly into a barge.