Fashions come and go. Wood industry economics also fluctuate. Yet there is every reason to believe that sugar maple and, to a lesser extent, beech will retain the favour of flooring and furniture buyers. In any case, the life span of trees vastly exceeds that of our economic cycles, and we have no better choice than to manage our forest resources according to existing value criteria. 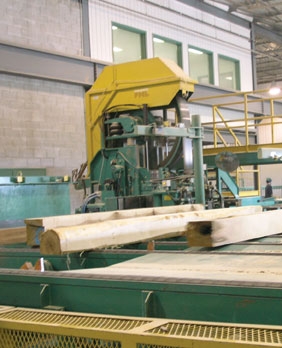 Fashions come and go. Wood industry economics also fluctuate. Yet there is every reason to believe that sugar maple and

Sugar maple and beech are major eastern Canadian wood species, and they are both used in many high-value products. Over the past decade, declining log quality has led forest managers to the conclusion that sustainability of the hardwood industry demands more efficient management.

Partial cutting has been a common silvicultural practice to improve hardwood stands. “Unfortunately, the focus has been on volume,” notes Tony Zhang, a senior scientist in the Resource Assessment Program at FPInnovations – Forintek Division. “The quality of a cubic metre of wood can be quite variable, as economically important wood characteristics vary,” he stresses. “This is particularly true in sugar maple, for example, where the light-coloured sapwood is much more valuable than the darker-coloured heartwood. It follows that forest management strategies can only be improved if they’re based on an understanding of their impact on the actual value chain. As it applies to partial cutting, we need to know how partial cutting affects not only tree growth, but also internal log quality and product recovery”.

Partial answers
For this reason, Zhang initiated an integrated study on partial cutting. With funding from the Ontario Living Legacy Trust and FPInnovations, he conducted the project in close collaboration with the Ontario Ministry of Natural Resources (Murray Woods, OMNR) and Tembec’s Forest Research Partnership (Al Stinson). Much of the work in the forest and sawmill was carried out by the FPInnovations team, with analyses being conducted by a PhD candidate (Aude Fournier). The project was based on a long-term partial cutting trial established by Dave Deugo and Rob Stokes in 1983-1984, and well documented since then by OMNR. Located in Ontario’s Parry Sound District, the stand used in the study was uneven aged and dominated by sugar maple and eastern beech.

The study also compared performances for AGS (acceptable growing stock) and UGS (unacceptable growing stock) such as defined in the Ontario Tree Marking Guide (2004). AGS trees have an appearance suggesting that they can reasonably be expected to contribute significantly to future crops, while UGS trees cannot. In a partial cutting operation, however, UGS may be preserved for reasons other than wood production, such as wildlife habitats. As could be expected, AGS sugar maple trees outperformed UGS ones in terms of BA increments.

Zhang reports that, in the case of sugar maple, lumber volume and value recovery increased steadily with increasing tree size, as did product value. Product value and lumber yield in medium and large sawlogs were higher than with small sawlogs and poles. But, in terms of dollars per cubic metre, only medium and small logs had significantly higher product value than pole trees. Stems with quality attributes corresponding to AGS trees also showed greater averages than UGS-type logs.

Given that tree value is proportionately related to tree size, it is economically justified to keep large trees standing when conducting a partial cutting operation as long as they can be expected to gain volume without losing quality. This study suggests that sugar maple trees should be harvested at a DBH (diameter at breast height) of approximately 45 cm for maximum value. Beyond this point, tree value tends to decrease due to rot and other defects.

The absence of any quality or damage class effect on growth parameters was somewhat surprising. It seems obvious, however, that cull, weak or severely damaged trees were more likely to die when left standing. In the experimental stand, approximately 15% of the trees that had died in the years subsequent to partial cutting had been severely impacted by logging operations. “Surviving damaged or poor stems can be expected to have a negative effect on both stand volume production and lumber yield in the long term,” Zhang adds. For this reason, he suggests that two or three cutting cycles may be necessary to attain the target structure and quality level required for optimum growth.

This study indicated that beech responded better to partial cutting than did sugar maple. This was probably due to the fact that the beech trees were found in lower dominance and younger tree classes than the sugar maple trees. Young and suppressed shade-tolerant trees are more likely to benefit from the gaps created by partial cutting. In terms of lumber volume and product value, on the contrary, sugar maple outperformed beech, most likely because the trees were larger and the value of maple lumber exceeds that of beech lumber.

In conclusion, this study shows that the proportion of AGS trees had more than doubled in the 20 years following the partial cutting operation. And stand productivity could be further improved if UGS stems are eliminated in future cutting cycles, but damage resulting from careless logging practices could exact a high price with respect to both stand growth and product yield.