March 1, 2018 - After 75 years in existence and with 57,000 people currently directly employed in forestry, the Ontario Forest Industry Association (OFIA) is confident in a bright future for forestry in Ontario, and Canada as a whole.

“In these uncertain times I am certain that forestry is in our future,” Jamie Lim, OFIA president said at the association’s 75th convention at One King West Hotel and Residence held in downtown Toronto yesterday. “Let’s ensure that Ontario leads the way; let’s keep working together.”

One way in which Ontario, and the country, is making some headway is in wood construction.

With wooden structures like the Pagoda of Fogong Temple in China standing at 67.3 metres since the year 1056, Cory Zurell, principal engineer at Blackwell Structural Engineers says there’s no reason why similar, or even, taller structures can’t be built now. This is especially the case in Canada where there is an abundance of resources.

“Sustainability has to be a principal concern in how we design buildings, and wood is a solution to that,” Zurell says in his tall wood building presentation.

Brock Commons at the University of British Columbia is a recent, popular example of a hybrid wood building, which opened in July 2017. At 18-storeys tall, it’s currently the tallest mass timber building in the world.

B.C.’s Wood Innovations Centre in Prince George and architect Shigeru Ban’s Terrace House in Vancouver are two more notable examples in that province. The latter is still in development and is slated to beat Brock Commons for being North America’s tallest hybrid timber structure once it’s complete in 2020.

The 13-storey-tall Origine Condos in Quebec are another example of hybrid wood construction success in Canada.

Examples of wood structures in Ontario include St. Jacobs Farmers’ Market in Waterloo, Redstone Winery in Niagara-on-the-lake, and 312 Adelaide St. W and 80 Atlantic in downtown Toronto.

And for a nation-wide example, the Douglas Cardinal Housing Corporation designs prefabricated cross-laminated timber homes and ships them to remote First Nations communities with housing needs in Canada.

Current Canadian building codes only recognize wood buildings up to six storeys, even though taller buildings already exist like the 312 Adelaide West brick and beam building in Toronto. It’s eight levels and it’s been there since 1895.

The 2020 National Building Code of Canada (NBCC) will have provisions for 12-storey mass timber buildings. Until then, Zurell says it’s important to harness creativity and find solutions to move forward in building with wood and be more sustainable overall. “There are many options open to us for exceeding what the code allows, and we just have to use it to our advantage,” he says.

Fire fears
“Yes, wood burns, get over it,” Zurell says, adding that although wood burns, it behaves better than steel in a fire. “Wood performs well in fire, actually, when we’re talking large mass dimension lumber.”

In the M-Building in Kanazawa City in Japan, wood is used to protect the steel in the structure.

“Sprinklers and fire alarms, that’s what changes the outcome of fires in buildings,” Zurell says. “Regardless of structure, those are the key items.”

Zurell says efficient buildings can be constructed by maximizing the behaviour of the materials and their appropriate use in different parts of the construction of the structure. He adds that knowing the behaviour of wood, how it shrinks, how it burns, are not obstacles to prevent wood construction. “Wood rots, so does steel, so does concrete… We know this and we just have to account for it,” he says.

So, why wood for buildings? Zurell asks the crowd. Wood is grown by the sun, it is light-weight relative to its strength, it has a low carbon footprint, it’s prefabricated, and fun fact: exposed wood has positive health and well-being benefits on people. Reports have found that when used in schools, students learn better, and offices built with wood attract high-profile tenants and fly off the market. 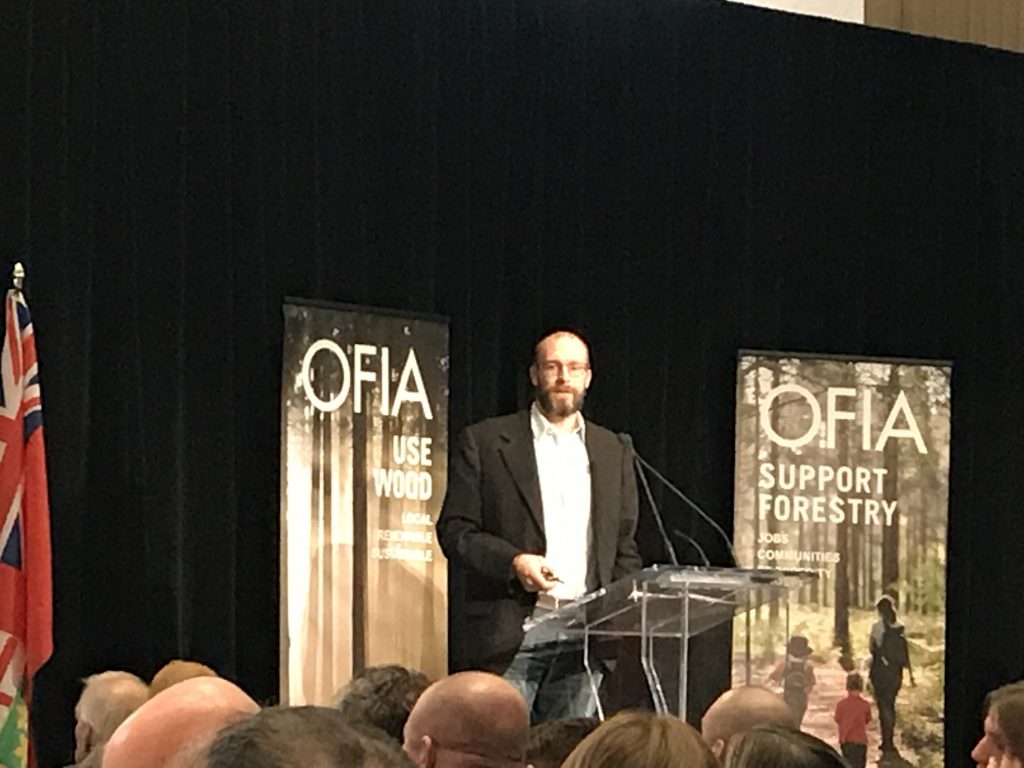 Sustainability has to be a principal concern in how we design buildings, and wood is a solution to that, Cory Zurell
Print this page