The old cliché of  “if you can’t beat them, join them” took on a whole new meaning earlier this year when two struggling plywood mills in northern Ontario joined forces to create a single viable company. But it wasn’t a simple case of one mill swallowing up, or being joined by the other. It was a true merger that capitalized on creating synergies, sharing technology and a skilled workforce, and melding together a varied customer base. 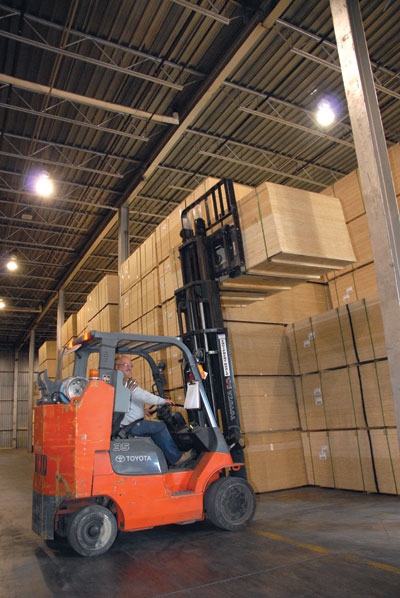 “These were both really good mills with great people and products, but times have been tough on the industry and neither mill was running at full capacity,” recalls Pat Doyle, product manager at True North Hardwood Plywood in Cochrane, Ont., which is the company that resulted from the merger of Kruger’s mill in Longlac, Ont., and Norbord’s mill in Cochrane. “Once the new company started up in February of this year, we never really looked back and now we are one of the only plywood mills in North America running anywhere near full capacity.”

Both mills have experienced a tumultuous past dating back to the 1960s. The Cochrane mill was built by Norbord in 1963, while the Longlac mill was built by Weldwood of Canada in the mid 1960s before being sold to Kruger in 1996.

The Cochrane plant was strictly a commodity sheathing mill in its early days but it wasn’t a profitable venture most years. That was up until 1992 when in a last ditch effort to keep the plant afloat, Norbord took a gamble, installing a used sander and converting the mill to a hardwood plywood plant. When things were starting to look up in 1995, the company further invested in the mill with an upgrade that included a new press, dryers, sanders and various other pieces of hardware. The last upgrade at the mill prior to the merger was just last year when new camera scanning technology from Ventek was installed.

It was a similar story 425 kilometres to the east along Ontario’s Provincial Highway 11 at Longlac, where Weldwood upgraded the mill to hardwood plywood production in the early 1980s and Kruger put in a pair of new Hessemann sanders as part of a $2-million upgrade in 2000. 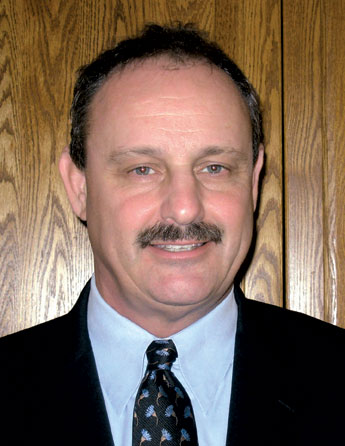 “I think it is fairly likely that both mills would not have made it if things had stayed the way they were,” says Robin Augustine, the Mississauga, Ont.-based president of True North. “At best, the two legacy mills were only running at 50% of capacity and they were bleeding cash. By forming the new company, we were able to bring together our strategic assets from each mill and let the others go away.”

Augustine credits the reputation the two mills had in the marketplace for the rapid acceptance of True North and its products. “Both mills had tremendous long-term customer partnerships and they were both strongly viewed in the marketplace,” he says. “The merger was welcomed by the customers of both mills as they didn’t want to see two of the top quality hardwood plywood mills in North American disappear.” 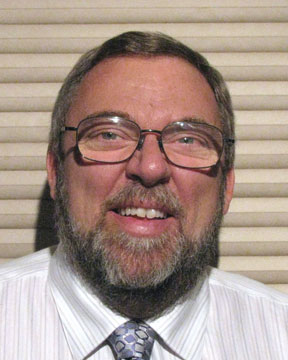 Bob Smith, who is the general manager of sales and marketing for True North, says each mill having a different and unique customer base has helped the new company tremendously. “The overlap in customers wasn’t that great,” he acknowledges. “Each mill had its own list of major customers so when we put the two together, we were able to develop a full order file for one mill. Also, we have good people running the True North mill and we have a great interface between production and sales.”

Bringing the two mills together was a fairly quick process, says Paulo Gignac, who is production manager at the True North mill and was the general manager at Longlac prior to the merger. “This all started when a vice-president from Norbord and a vice-president from Kruger had a chance meeting at an airport,” Gignac explains. “From there, everything transpired very quickly and the deal really started to cook in the fall of 2008. We kept producing at Longlac right up until January 31 of this year as we wanted to make sure we met the needs of our customers, and then True North started up on February 1. It was pretty much a seamless transition with very few hiccups.”

The current general manager at True North, Rick Linklater, is also Longlac alumni so he knew what he was getting when the two mills merged forces. Linklater made the jump much earlier though, leaving a forest technician role at Longlac in 1993 to take on a woodlands position at the Cochrane mill. He went on to become general manager of the Cochrane facility four years later and has been in the position since.

“This was a positive move for both mills,” says Linklater. “We were able to bring together some very skilled people and by running near capacity now, we are really well positioned to take off when the economy recovers. Because we are already ramped up, we feel that we will be in a better position to keep up with the market demand than some of our competitors.”

Doyle concurs, noting that with the merger, True North has built a stronger team than either mill had in the past. “We were able to bring together a lot of employees with 20 to 30 years of experience under their belts,” he says. “That’s not the normal trend when hiring. These people have the experience to produce consistently superior products, they have a union that is supportive of the merger, and they have a positive outlook with the new company.”

Today, the mill has about 200 employees, including hourly crews, support staff and management. They run three shifts, five days a week, and on weekends they run additional shifts to produce extra core products if they will be needed for the following week’s production. Most weeks, the production volume is somewhere in the neighbourhood of 30,000 panels, which translates to about 333,000 square feet per day (based on the industry standard 3/8 in. basis).

The mill is essentially the same configuration as it was while under Norbord’s watch with trembling aspen logs being delivered by truck in 8 ft. lengths. Unloading and most of the yard work is completed with  two Volvo Highlifts and a Pettibone  Super 20. The first step for the logs is the debarker pond where dirt and debris are removed and the bark is softened. Next in line is a Cambio debarker, followed by seven conditioning ponds that are heated in the winter with natural gas. From the conditioning ponds, the logs are moved with the help of jack ladders to the swing saw, which is essentially a cut off saw. Here they are trimmed for either the 8 ft. lathe or the 4 ft. lathe. The 8 ft. lathe, which was originally built by COE, handles the higher quality logs and is equipped with Daquota controls and an X-Y charger from Raute. The 8 ft. line also features Ventek scanning and a 3-bin Durand-Raute stacker that separates the veneer into pieces, full sheets, and full sheets that require further drying. The 4 ft. lathe used for lower grade veneers has a green chain where veneer is hand sorted into pieces and fish tails.

The next step in the process is veneer drying, which is handled by a pair of natural gas fired jet dryers from COE that both feature Ventek dryer controls and four decks. The veneer is processed through the dryers at temperatures of up to 450ºF. At the outfeed of the dryers, the veneer goes through Ward moisture detectors to ensure the correct moisture content has been reached, and then a Ventek GS2000 camera scanner that determines the grade of the veneer. 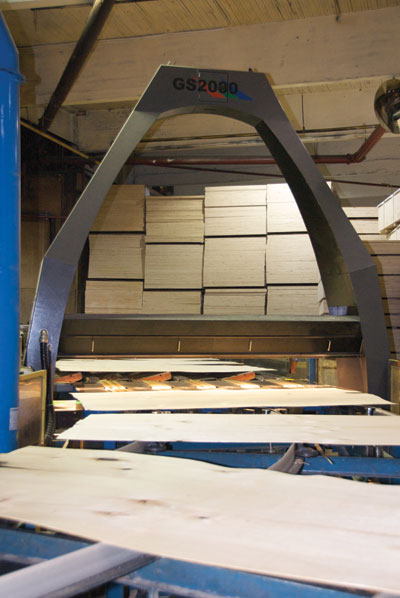 The mill has a pair of composers – a 4 ft. Hashimoto and an 8 ft. Raute. This is where the pieces are bonded together prior to being sent along with the full sheets to one of six patchers from Raymen. Following the patching process, hardwood veneer in various species that is purchased on the open market is introduced to the process. This high-quality veneer is typically used for the exterior surfaces, or faces of the panels, while much of the aspen veneer produced by True North is used for the core. At this point, a pair of 4 ft. glue spreaders manufactured by Globe are used to layup the panels for the mill’s 30-opening press while a single globe 8 ft. spreader is used to prepare the panels for the 24-opening press. All panels go through a cold press process prior to hot pressing. The 30-opening hot press is typically used for panels that will range from 5 plies to 9 plies, while the 24-opening hot press is normally used for 3-ply products that include an outside sheet of hardwood veneer on the top and bottom with a single layer of Oriented Strand Board (OSB), Medium Density Fibreboard (MDF) or particleboard sandwiched in between.

Following the pressing process, all panels go through a Globe saw line where they are trimmed to size prior to going through a mill-designed and manufactured putty repair station where any repairs are made to the panels before they are sent to the sander and grade line. The mill has a pair of floating head Timesaver sanders that finish the surfaces and then a Trienco blow detector utilizes sound wave technology to detect any bond problems in the panels. The finished panels are packaged with triple cross straps to prevent warping, metal corners for product protection, cardboard bottom sheets to prevent forklift damage and cardboard covers that are labelled with size, grade and shipping information. Shipping is by rail or truck with a large percentage of the product being sent to True North’s own distribution centre in Mississauga, Ont., just outside of Toronto. From the distribution centre, the panels can be in the marketplace in Ontario, Quebec, the Great Lake States and the U.S. northeast within two days. 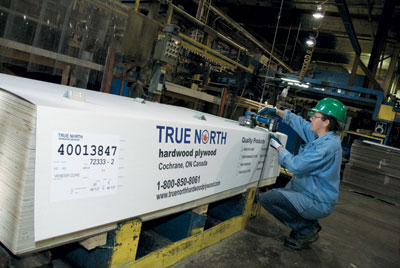 In addition to the main production plant, True North also operates a storage and veneer grading facility in Cochrane where all purchased hardwood veneer for the surface plies and the OSB, MDF and particleboard for the cores is delivered, graded  and stored prior to production. Most of the purchased hardwood veneer comes in dry from suppliers in the Quebec and the U.S. Midwest,  while the OSB, MDF and particleboard is sourced on the open market.

The trembling aspen processed by True North is mainly harvested from a radius of  160 kilometres from Cochrane and much of it comes from the mill’s own Timber Supply Agreement (TSA) with the Ontario Ministry of Natural Resources.

Despite the positive outlook for True North, the company’s president says he is taking a “cautiously optimistic approach” when asked what is down the road for the hardwood plywood producer. “We are well positioned and there has been excellent market acceptance of our products, but we sell 70% of our hardwood plywood into the U.S. market and that means we are vulnerable to fluctuating currency rates, which is something our U.S.-based competition doesn’t have to contend with,” Augustine explains. “The economy continues to struggle and the U.S. housing markets remain soft, so the next couple of years are not going to be easy for us, but by combining the best of two mills into one, we hope to be able to emerge as a strong contender in what has been a sea of mill closures and curtailments.”