Feller bunchers and felling heads have improved by leaps and bounds in the 18 years or so I’ve been at this, but one thing that has remained largely unchanged is the buncher’s business end – The saw tooth. Until now that is. Maurice Micacchi, president of Timberblade Inc., has been around logging gear for decades. He was among the original designers at Koehring Waterous, and until last year was R&D manager with John Deere (and Timberjack before that) in Woodstock, ON. When Deere closed the doors at the old Timberjack plant in that town, Maurice struck out on his own to literally cut his teeth on a new idea. 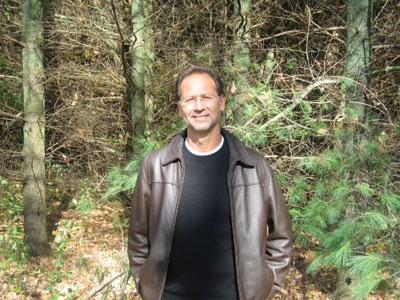 “With the changes at Woodstock, I had an opportunity to start something new. The forest equipment business is great – I love the industry, the people, the places you get to go – so I was keen to stay in the sector. It occurred to me that the basic saw tooth design for high speed heads had not changed dramatically in over 15 years, so I assumed that there had to be room for improvement. It turns out there was.” 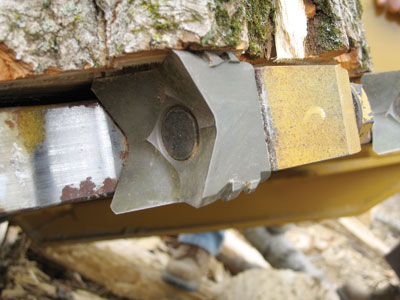 Maurice started designing his new Gator Tooth (patent pending) in November 2006, with one clear goal – longer tooth life. The resulting tooth is a square tooth design with four main cutting points. The really revolutionary part lies just below each main cutting point, where two more cutting tips are added, for a total of 12 tips per tooth. When a tree is cut, all 12 tips get in on the action. The idea is to share cutting duties over a larger cutting area, all in the hopes of postponing tooth replacement.

About six months ago, Timberblade started putting teeth out in the field for testing in the day-to-day logging grind, with 10 sets of teeth already working in areas like Georgia, Virginia, Alabama, and most recently in the BC Interior. The results surprised even Maurice.

“At the outset, I figured if we could get from 10 to 20% more life from the teeth, we’d be onto something. There’s a wide range, of course, since everyone is working in different conditions, and I don’t want to create unrealistic expectations. Still, the loggers are getting significantly more life from the teeth than I had expected.”

He adds that all the loggers found the Gator Teeth cut faster as well. Especially in bigger trees, the disc does not bog down as much, as each tooth takes a smaller bite out of the wood and they keep their edge longer.

Fresh from successful field trials, Timberblade is ready to move to production. The teeth will be made by an established automotive parts manufacturer in Ontario’s industrial heartland, with availability in January 2008. The extra machining means the teeth will cost slightly more than existing designs, but Maurice is now certain that the extra life and reduced downtime will still yield substantial returns. To date, the teeth are ready for installation on Tigercat, John Deere, and Waratah saw discs, and Maurice already has distribution set up in the southern states.

Timberblade is also co-operating with a major machinery manufacturer to have the teeth roll off some bunchers right from the factory, a move that will be sure to get the ball rolling in key markets. In the meantime, he continues to line up distribution in Canada, looking for partners with saw tooth experience, and has just launched a website to help spread the word (www.timber­blade.com).

With a new tooth design hitting the woods near you, it may be time to look at all the other basic tools of the trade we take for granted.