Nov. 8, 2016 - From fibre supply to scanner scaling to drying, a spotlight was on the newest optimization technologies and techniques available to sawmill managers in Canada at the second annual OptiSaw East event. 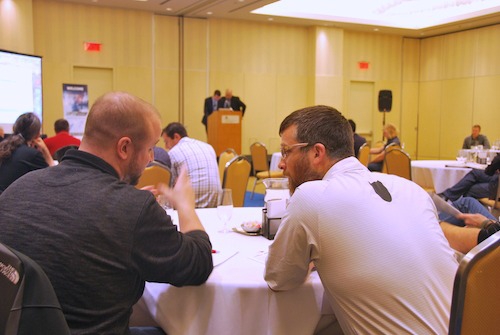 On Nov. 4, mill managers gathered in Montreal to hear from speakers on the latest automation and optimization options that can help wood product companies save money. Weeks after the expiry of the Canada-U.S. softwood lumber agreement extension, and days before the U.S. election, it’s safe to say saving money was top of mind.

HewSaw began the conference on an exciting note when marketing manager Bill Tice announced that the company’s newest technology will increase the speed of primary breakdown by about 30 per cent.

“You are some of the first people to hear about this technology,” Tice told the crowd.

Called the dx sawing process, the technology replaces the standard double-arbour sawing technique with a four-arbour system. The first two arbours make a primary cut into the cant – similar to a pilot hold made during drilling – while the second two arbours finish the cut.

The process, Tice said, increases recovery and yield from each log due reduced kerf, increased speed, and better standard deviation. Tice listed the kerf reduction at about 12 per cent, and average increase of speed about 30 per cent. The dx technology is now being introduced into HewSaw’s markets worldwide.

Tice was followed by PMP Solutions’ Francois Leger, who shared details about how data can be collected at sawmills to understand problem areas, and learn how to solve them.

Data collection, Leger said, is a four-step process involving measurement, analysis, problem solving, and then closing the loop by monitoring. He gave an example of a mill in Eastern Canada that went through the steps to improve its drying process through data collection.

Jonathan Levesque, vice-president of sales and development for Groupe Savoie, presented on how the hardwood company has diversified its product offerings to maximize the use of waste product. Today, the company produces lumber, tone wood, kitchen cabinet components, specialty hardwood products, pallets and components, and biomass fuels.

Groupe Savoie’s hardwood pellet plant produces 95,000 tonnes, 60 per cent for residential use and 40 per cent for industrial use. The plant currently ships to Europe and the U.S., in addition to supplying the Canadian market.

“We are increasing the Canadian percentage year after year and our goal down the road is to make sure 100 per cent of production stays in Canada, and in our region,” Levesque said.

To that end, in 2011 Groupe Savoie partnered with New Brunswick-based company Compact Appliances to create Biomass Solution Biomasse, which sells biomass solutions such as boilers, stoves and furnaces. The partnership helps increase demand for biomass heating.

Autolog’s Yvan Rainville followed Levesque presentation with details on the company’s vision scanning technologies. The company has developed 3D data technology to identify vision-type defects such as splits and shakes and obvious unsound wood at the trimmer optimizer, and tracheid data to detect knots and unsound wood at planer mills.

The final morning session was from BID Group’s David Gourde who shared information about the benefits of profiling systems for both primary and secondary breakdown to increase production, improve recovery and reduce downtime.

Gourde shared two sawmill case studies, one from Quebec and another from North Carolina, where profiling systems were installed or fitted into existing sawlines.

from primary and secondary breakdown to drying.

Afternoon sessions began with a Joey Nelson from JoeScan, who asked sawmill managers to share their own experiences with equipment obsolescence. This is a growing issue across all industries, he said, and sawmills are not immune to the effects. Equipment is becoming more interdependent and connected, which means that a single obsolete component can halt production for days, costing companies lost revenue.

This year Interfor’s Acorn sawmill in Delta, B.C., became the first in North America to install a scanner approved by Measurement Canada to measure log volume for trade. The scanner Interfor installed is a Springer-Microtec Logeye (Read Canadian Forest Industries’ coverage of the installation).

Look for more coverage on OptiSaw in the January/February issue of Canadian Forest Industries. Register for the upcoming OptiSaw West, taking place May 24 in Vancouver, at www.optisaw.com/