June 23, 2017 - Forestry enthusiasts from around the world were treated to hundreds of equipment premiers at Elmia Wood, the forestry fair held every four years in Sweden. Couldn't make the show? Canadian Forest Industries was there to take in all the action and bring you product highlights. Watch our wrap-up video here. 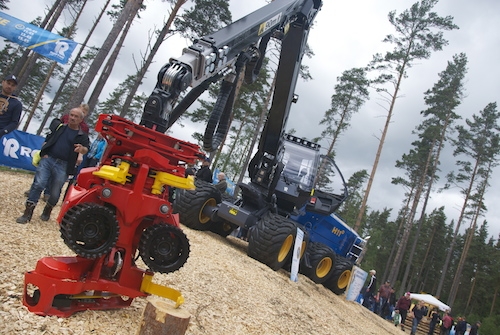 New powertrain consumes less fuel
Rottne introduced a new model of harvester at Elmia that features a newly designed powertrain that results in lower fuel consumption and less ground disturbance. The H8D’s new Tier 4 engine has a hydraulic motor in every wheel hub, combined with traction control, instead of a conventional hydrostatic drive with a gearbox. An internal computer ensures that every wheel supplies the optimal power without skidding. The H8D has a narrow and compact chassis with a swing arm system that gives the machine unique terrain handling qualities. Rottne’s H21D and H11D harvester and F13D forwarder were in action at the show.
www.rottne.com/en/

Crane-tip control for harvesters
John Deere’s booth was a hub of activity during the show, with live singers and a constant flow of attendees test driving the new G-Series harvester and forwarder with rotating and levelling cabs. John Deere globally premiered its crane-tip control for harvesters, a continuation from the 2013 show when they introduced forwarders with crane-tip control. Visitors were able to test out the new function on a John Deere 1270 harvester. The booth also showed for the first time a harvester in the G series, the 1170G with eight wheels. The new harvester is smaller and designed for many functions, including thinning and final felling.
www.deere.com

Combination grapples
Canadian company Rotobec, based in Quebec, featured its latest combination grapple models at Elmia Wood. Made of 100 per cent high-strength steel, the grapples have a bypassing jaw design, which claims to be the shortest on the market, that allows operators to easily and efficiently handle single logs or full cords of pulpwood. A unique jaw shape allows for log rolling making it easy to grab a full load. Fully sealed rotors have standard 360 degree rotation, and a fully supported pinion gear. The grapples are also available with a positioned rotation, which allows for more control over the grapple and the load.
www.rotobec.com

Mulching head with fixed teeth rotor
FAE introduced a new model of PTO driven heads for forestry mulching, the ULM/S/DT. The new product includes interchangeable bolted-on spike counter blades that allows the operator to adjust the final product size while in use, a new ripper design for push frame, two different kind self aligning device and a new rotor design for better material distribution. The mulcher is designed for tractors from 80 to 130hp. Other features include inner anti-wear FCP plates, and bolted-on protection chains.
www.fae-group.com

Levelling system uses sensors
Ponsse brought 15 machines to the show, its full range of models, and put on a full-scale demonstration of its harvesters and forwards. At the booth Ponsse launched its new Active Frame levelling system for its Ergo harvester; previously only available on its forwarders. The system uses sensors to react to uneven ground and compensate up to seven degrees. Ponsse also introduced a new seat design for maximum comfort. The seat frame is reinforced and includes heavy-duty suspension, and is designed for operator comfort with excellent ergonomics. Ponsse also brought a world champion arm wrestler, and attendees were able to face off against each other, to a cheering crowd.
www.ponsse.com

High-speed saw heads
Quadco brought its newest felling and shear models to the fair, showing off the 212 felling shear and the 22SC felling head. The 212 shear has a cutting capacity of 12 inches and an accumulation area of 0.16 m2. The 1,180-kilogram attachment can tilt laterally up to +/- 130 degrees, and is ideal for a 12- to 15-ton excavator. The 22SC felling head has a cutting capacity of 22 inches, and a 20-teeth saw disk with a two-inch kerf. The accumulation area is 0.51 m2. The new “Arms-up” style high-speed disc saw head is specially designed for small timber where high accumulation capacity and fast cycles are required. It weighs only 6,600 pounds with 360-degree high torque tilt-ideal for long reach booms.
www.quadco.com

Harvester made for steep terrain
EcoLog premiered the newest edition to its E Series machines: the 688E eight-wheel harvester. The harvester is specially designed to handle steep terrain or sensitive surfaces. EcoLog launched its new E Series of harvesters last year, equipping them all with Volvo Penta D8 engines that are designed specifically for forestry applications. EcoLog also introduced Eco Online, a fleet management app that allows operators or supervisors to monitor the machines, as well as TCO (total cost of ownership calculator), a service that allows machine owners to calculate the cost versus savings from their investment. EcoLog had live demonstrations of its machines as well as a simulator on site at its booth.
www.ecologforestry.com

Pre-clearing attachment
MenSe’s Elmia booth drew some attention with a video presentation of its pre-clearing attachment device designed for harvesting heads and grapples. The attachment comes in two sizes, a 58-kilogram RT7 measuring 7 cm and a 47-kilogram RT5 measuring 5 cm, and is easily mounted. Its blades rotate from side to side to clear brush and allow harvesters to access select trees with minimal disturbance. When the grapple or harvesting head is not in operation, the blade stops.
www.mense.fi

Chipper auger system increases payload
Peterson held demonstrations of its 3310 drum chipper and showed off its 2710 model track-mounted horizontal grinder at the show. The 3310 is new for Peterson and can handle up to 24-inch diameter logs. Its innovative auger system feeds an accelerator to increase chip payload density. The 2710D is designed for operations that require high production and frequent moves between jobs. The 30,900 kilogram machine is among Peterson’s lightest in its grinder series. Its large grate area enables it to produce materials to exact specifications, and the quick-change multiple grate system makes it easy to customize.
www.petersoncorp.com

Stereo steering wheel loader
Liebherr introduced for the first time its new L 518 Stereo wheel loader with stereo steering at Elmia. Stereo steering gives operators an ultra-low turning radius. Liebherr also held for the first time a demonstration of its new L 580 XPower log handler. The machine’s lift arm is designed for high manipulation heights, and can handle wood up to 3.8 m3. A Tier 4 engine gives 340hp, and the grapple can be rotated 360 degrees as well as pivoting forwards and backwards. A Smooth Speed Reduction system (SSR-System) developed by Liebherr allows a highly sensitive movement of the load, thus increasing machine stability and productivity.
www.liebherr.com

Crane reaches 1.45 metres
Farma, the brand of forestry machines made by Swedish company Fors MW, manufactured in Estonia, featured its latest robust trailer options at Elmia. Farma introduced its new Generation 3 crane C6.7 log trailer. The C6.7 reaches 6.7 metres and has a telescopic crane that reaches 1.45 metres. The new trailer features a new telescope, hidden hoses and better working geometry of the boom. The crane is made of high strength steel to give maximum strength and low weight to provide higher payload. The lifting cylinder is well protected behind the railing. New design ensures the crane to be more hard-wearing and maintenance friendly.
www.forsmw.com

Saw chain cuts faster with lower vibrations
Husqvarna’s booth at Elmia introduced globally its new X-CUT saw chain. The saw chain uses new materials to cut faster with lower vibrations, and stays sharp longer. The chain is supplied pre-stretched, so it can be used immediately and will require less filing. So far the chain is only available in a single version with a varying number of drive links. The version is the one most commonly used with chainsaws, with a pitch of 0.325 inches and a 1.3 mm gauge. More versions are being developed.
www.husqvarna.com

Horizontal grinder meets legal transport worldwide
Morbark brought its brand new 3400XT Wood Hog horizontal grinder to Sweden. The new design features a standard width of 8’4″ (2.53 m), making it within the legal transport width in any country, no matter what engine is used. Like all of Morbark Wood Hog models, the 3400XT is available with electric power. Other features include an infeed bed that is an additional 24 inches longer with sloped sides, standard a removable infeed chain return floor, and Morbark Integrated Control System – or MICS – a diagnostics tool and control system.
www.morbark.com

Harvesting heads are fully compatible
Waratah’s booth not only displayed its range of harvesting heads but also emphasized their compatibility with various carrier and control system combinations. The heads are fully plug and play with Dasa Forester/Dasa 4, Komatsu, Ponsse, Technion and other control systems, as well a wide range of common carriers, from Logset to Ecolog.
www.waratah.com

Small harvester designed for hilly ground
Komatsu brought its entire range of forestry products to Elmia Wood, and introduced a few new ones. The 901XC made its debut at the show, the smallest of the XC line designed for thinning on hilly ground, with eight wheels creating an even distribution of weight, and a higher ground clearance. Harvesters in the XC series are equipped with swinging rear axle, teamed with a bogie, with twin suspension systems, the Komatsu Double Suspension Comfort Bogie, and excellent off-road handling. Komatsu also introduced its own winch system, the Komatsu Traction Aid Winch for its 875 forwarder and 911/230H and 931 harvesters. The winch has a separate drum for rope storage, while the motor, providing traction, is installed on the capstan unit.
www.komatsuforest.com

Harvesting heads built for extreme conditions
Log Max featured its XTreme series of harvesting heads at the show, including the 7000XT. With its large, high-torque feed motors, the 7000XT has 11,600 pounds of feed force and delimbing power. High-flow hydraulics give the head increased performance in tough conditions. The XTreme series are heavy-duty harvesting heads specifically designed for tracked carriers between 25-25 tons. The 7000XT has a 16 to 50 cm productive range, maximum cutting diameter of 65/75/80 cm, and a minimum delimbing diameter of four centimetres.
www.logmax.com/en

Disc trencher operates in both directions
Bracke Forest held the world premier of its new disc trencher attachment at its Elmia Wood booth. The T28.a two-row disc trencher can tilt the discs left to right, each one moving independently of the other, giving the operator the choice of where to lay the humus. This function is ideal when working on sloped terrain. A new toothed plates design lay more soil on the humus and bolt-on toothed plates are easy to replace. The T28.a has a control system that makes it easy to install on machines, and a dislay that is user friendly. Bracke also introduced a new planter, the P12, which is designed for planting in dry, warm conditions.
www.brackeforest.com