Vancouver’s 2008 PricewaterhouseCoopers (PwC) Annual Global Conference on the Forest and Paper Industry, set during one of the most disastrous eras of Canada’s forest industry, was crowded with delegates like a blazing tower full of trapped occupants. The conference room at the Fairmont Vancouver had almost full seating on May 8, and press crammed onto a long table at the room’s rear or perched on its raised dais. All came to hear the conference message – strategies for survival. The conference, though, had a more subtle theme.  Are large companies, practicing forestry to generate the most shareholder equity, really that great for the Canadian economy? 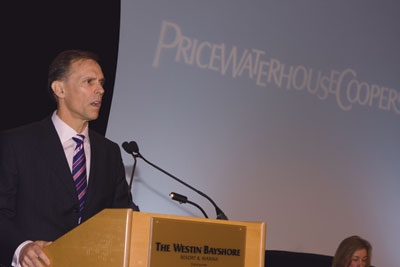 “Blood on the floor”, “still digging in” and “last man standing” were all terms tossed about to describe the closures, receiverships, and low-cost, high-volume strategies that are helping to tank the North American industry. Speaker after speaker told a briefcase-toting audience of dark suits what every logger in steel-toed boots already knows – That forest industry majors hooked to the US housing market are reeling like a stuck elephant, as the sub-prime mortgage crisis, a flagging US economy, and strong Canadian dollar cause havoc.

Bottom yet?
Things will get worse before they get better, PwC partner Craig Campbell told delegates. Housing starts are half of the 2005-2006 level, yet Canadian production has not curtailed fast enough. He predicted that 2008 will be worse than 2007 and 1991 combined. In 1991, the grimmest year on record, the industry lost $1 billion. As expected, forest analysts pointed out that investor capital was being eroded as return on
investment nose-dives.

Russ Taylor, president of the International Wood Markets Group Inc., said the softwood lumber industry is expected to continue plunging in 2008 and 2009, and “then we will begin climbing our way back. We are in a huge hole and we are still digging in, and until we fill that hole we won’t start climbing out.”

As for strategies, they were there, but tough to spot, like life-preservers rolling in a raging sea. One came from an audience question – why are European producers weathering the storm better than North American producers? Campbell replied that “the European producers are more diversified geographically (in markets) and into the energy market. They are also diversified in their product line.” In addition, he added, they take “more risks” than North Americans.

Another strategy?  Energy created from wood biomass is happening in BC.  BC Hydro’s executive vice-president Bev Van Ruyven said biomass can be a clean and stable source of year-round power generation able to fill a growing deficit in the utility’s power supply. Forest biomass as fuel is becoming more viable as fossil fuel prices soar and the fuel-versus-food debate grows around biomass associated with agricultural lands. She explained BC’s recently unveiled Energy Strategy and the call for a “new generation of supply” from MPB wood. Requests for expressions of interest (RFEOI) have garnered some 80 responses from First Nations, forest companies, and other organizations.

The biomass generation gives forest companies the opportunity to supplement power requirements, but also to sell excess into the BC Hydro grid, generating revenues. Asked about return on investment when MPB wood is exhausted in five to seven years, she replied that rising fossil fuel costs would cause the BC forest companies to re-evaluate waste. “There is debate on how long the MPB will last – five, seven 10 or 20 years,” she said. But, there are three clear sources of biomass – MPB wood, mill residuals, and waste wood left on the forest floor.  Her bottom line message is that over the next decade, the definition of waste – or non-usable wood material – will drill down as more demands emerge for wood. Still, questions like tenure, fibre cost, economic haul distances, and more, remain for a cautious forest industry to answer.

Fibre is king
Another conference message was that over time, those with fibre access will be rewarded.  A world-wide fibre crunch is shaping up. Russia continues to move to heavy punitive tariffs on log exports, with the big jump coming in January 2009. Many of Russia’s traditional buyers will be seeking logs elsewhere, placing competition on the supply and creating new export opportunities.

At the same time, North American supply is tightening. The peaking of the MPB infestation will cause a reduction of AAC in BC that Ken Shields, longtime Vancouver forest analyst, said Eastern Canada will not be able to fill. Quebec’s annual cut has fallen dramatically in recent years, and Ontario is seeing pressure on its own harvest, most recently with its new endangered species legislation.

“There is also a huge change in US timberland,” he said, as the 60% privately held lands are being snapped up by financial investors paying triple the normal acre cost. These buyers will have no qualms about shutting down production if they do not see a suitable return on investment.

As the world moves towards a fibre crunch, those who have access to fibre will “have a lot of reason for optimism,” especially as higher prices emerge for lumber.  There also continues to be a surge in commodity markets and emergent countries such as China and India will be new growth market areas.

One of Shield’s comments also called into question how large forest companies operate within the forest framework. The “last man standing” race to the lowest price does not make sense, he said. “There is a question as to whether the high volumes that are maintained under this business strategy to achieve low unit costs makes for an optimal strategy,” he said, questioning whether it is preserving shareholder value and providing companies with a strong credit profile in this downturn. Given events over the past 18 months, that’s a fair question.