January 20, 2016 - The Swedish market for forest machines is shrinking. That’s the conclusion of a review of the past six years’ registrations of forwarders. The average reduction is 16 per cent. The manufacturers can see several reasons and the trend also applies to harvesters.

“The machines are becoming more efficient, with a higher utilisation rate and longer lifespan,” explains Rolf Andersson, CEO of Rottne. “Because the felling volumes stay relatively constant from year to year, fewer machines are required.”

The trend is also apparent in the after market. Previously it was common to do welding repairs on frames and centre pivots. But stronger constructions now mean that welding is rarely done whatever the brand of machine.

Other factors are also at work. Peter Hasselryd, CEO of Komatsu Forest, says the proportion of final felling done has been unusually high.

“We’ve sold fewer but larger machines,” he says, pointing to upcoming production increases at the Södra Värö and SCA Ortviken pulp mills. “The forestry companies may have temporarily reduced their thinning operations in order to save their thinner stock until the new mills come on line.”

Higher demands from the banks
A third explanation is that the banks are making greater demands for financing forest machines and contractors are therefore delaying replacing their machines.

“This is fundamentally a sound development that can give contractors a stronger economic situation,” says Martin Bredenfeldt, CEO of Gremo.

New registrations of forwarders fell by five percent in 2015, from 301 to 287 machines. John Deere retook first place with 127 registered forwarders, a market share of 44.3 percent.

“We were right in the middle of changing our product range in 2014 and had eight months’ delivery time for some models,” explains Dieter Reinisch of John Deere. “Now the new models are in place and the statistics are showing that.”

Komatsu Forest was the top selling brand in Sweden in 2014. Last year the company fell back from 101 to 85 forwarders sold. The move does not worry Peter Hasselryd.

“2014 was a good year with successful launches of new models,” he says. “Over time we’ve had a 30-percent market share and that’s where we are now.”

Gremo was among those that lost the most. According to the official statistics four Gremo forwarders were registered in 2015. The company says it sold seven machines but even that is nearly a 50-percent reduction compared with 2014’s sale of 12 machines.

“We’ve cut back on our operations and have reached our planned level,” Martin Bredenfeldt says. “Seventy to seventy-five percent of our production goes to export, mainly within Europe.”

Big growth for small machines
Another explanation for the shrinking market could be the successes of small professional machines, which are not registered with the Swedish Transport Agency. But the manufacturers say this competition has a marginal effect.

During the period 2013 to 2015 an average of 282 forwarders were registered per year. The average for the previous three-year period was 335, meaning that the market has shrunk by 16 percent or 54 forwarders.

Number of registered forwarders in Sweden in 2015 by manufacturer

Number of registered forwarders in Sweden by year

Skotarkartan.se is a website developed by Elmia’s forestry department. The site presents a map of where the newly registered forwarders end up in Sweden, specified by manufacturer. The information is based on public data on new registrations supplied by the Swedish Transport Agency. For more information about Elmia’s forestry fairs, contact Communications Manager Veronika Albert, veronika.albert@elmia.se, tel +46 36 15 22 34. 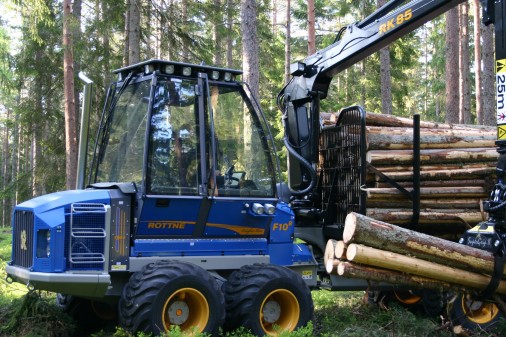 The Swedish market for forest machines is shrinking. That’s the conclusion of a review of the past six years’ registrations of forwarders. The average reduction is 16 per cent.
Print this page