The newest F-150 is now coming off the assembly line in Dearborn – and though it’s still referred to as a “half-ton” truck, it’s anything but. In fact, with the highest towing and payload capacities ever it’s sure to cause a stir among potential buyers – but capacity aside, this newest Ford F-series pickup now in Canadian showrooms is also one of the best equipped. 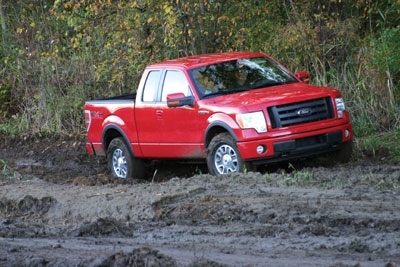 That has often been a Ford hallmark, and even though it’s 61 years removed from the original 1948 F1, the newest model carries many of the forward thinking features that first model offered, like a larger cab, improved suspension, better payload and extra driver comforts.

Attention to these customer needs and being first to market with solutions to those needs is what made that first truck a success and what has kept the F-series in the number one sales position for more half of its six decade run – and the 2009 F-150 looks like a contender to maintain that record.

What else should those that use trucks for industrial use care about? How about an integrated factory trailer brake controller and a new anti-sway system that works automatically with the truck and trailer brakes to bring a fishtailing trailer back into line.

Pricing on the new truck starts at $24,199 for the Regular Cab, XL 2WD and rises through dozens of variations to $46,699 for a SuperCrew 4WD Lariat.

Introduced at Ford’s test facility about an hour from Detroit, the squared up truck was offered for scrutiny in a garage – that was a bit different.  There was no fancy resort or exotic fly-in destination tapped for this demo – instead Ford used its Michigan Proving Grounds to highlight not only changes to the F-150 but also showed off how those changes were tested. I drove the truck through the same on and off-road tests they used in its development.

All the cards seemed to be on the table in this preview – including a free hand on the track – nothing was off-limits, not even “Cattail Swamp” where after a heavy nights rain most of the trucks that tried to cross it sunk like the Titanic. (Not yours truly mind you – I made it through – twice.)  This exhibition showed off a new electronic rear differential “locker” on the 4WD trucks that will be standard equipment and improve off-road traction to at least the level Chevy hit last year when it also added an automatic rear-end locker to its design.

The “why?” of this venue choice by Ford comes down to one fact – the F-series is its most profitable model and they need all the cash they can get. And while I, and they, know there have been years where some mediocre improvements were puffed up and offered as all-new, that is not the case this time around. Hence the reason they weren’t afraid of this close-quarter scrutiny at the research facility.

For instance, towing capacity has increased to 11,300 lbs – while payload has risen to 3,000 lbs as a direct result of a new frame designed with new high-strength steel – now the industry benchmark. (Despite its increased load bearing ability the frame weighs 100 lbs less than the last generation frame.) These weights are now supported with heavier, three-inch wide leaf springs (that improve lateral stiffness) and upgraded LT tires.

To demonstrate the feel of the new frame we towed loaded trailers (8,500 lbs) and drove trucks with loaded beds on the test tracks – and in each case we were offered competitors trucks carrying or towing the same weights for comparison.

Truckers are always looking for more space and the ’09 F-series offers it with a new longer wheelbase that supports a stretched four-door SuperCrew (six-inches more for the backseat alone) without robbing the cargo bed for that stretch.

That extra space is put to good use with a completely flat floor and rear bench seat that folds up flat against the back wall. This new cab is also better insulated for noise and is supported entirely on isolated rubber mounts that make it more comfortable than previous versions.

In fact, I recently test drove a new Ford Flex (that cleverly disguised mini-van) and after driving the F-150 on public roads in the Michigan countryside I was struck by how similar they were – firm, smooth and quiet. 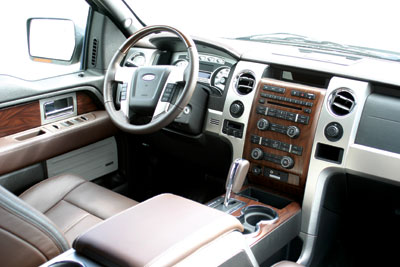 This quiet interior is complemented with a range of driver comforts in the nicely appointed base cabin package. But for ’09 another high-end trim level called the Platinum has been added. Sliding in above the King Ranch this brings to seven the number of appearance packages that the F-series now offers. While largely unchanged from ‘04, the new cabin (with tweaks) leaves Ford’s interiors competitive with its competition – but no one else offers this array of trim choices.

Where Ford has invested a considerable amount of its development dollars is in powertrain and fuel economy improvement. As a result, fuel economy gains as high as 12% versus the previous generation have been realized (when equipped with the high-volume 3-valve 5.4L V8). Looking at all three engines, fuel economy across the line averages out at a gain of 8%.

There is even a new SFE (Superior Fuel Economy)* package that will be available on F-150 SuperCrew XL and XLT 2WD vehicles with the 4.6L three-valve V8.  This SFE pickup claims to hit 15.7 L/100km City and 11.2 L/100km Highway. Some of the engineering that have made this possible include a new six-speed automatic transmission and an optional 3.15 rear axle. 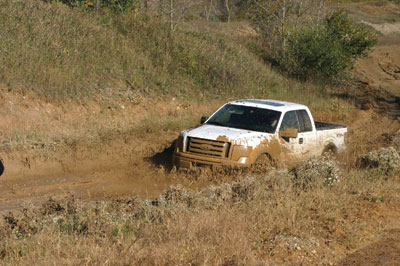 This new six-speed tranny has responsive low end and a double set of overdrive gears. This new gearbox alone contributes a 4 to 6% fuel savings over the old four-speed. Another gas saving feature is a deceleration fuel shut-off.  This neat trick is automatic and requires no driver input – as the accelerator is released the system temporarily turns off the fuel. The flow resumes when the truck reaches idle or the driver hits the gas again.
An interesting side note – a top horsepower of 320 made by the 5.4L suggests that Ford has opted out of the pickup horsepower war. Dodge’s Hemi, by comparison, is at 390 while the Toyota Tundra is at 381 – even GM offers a 6L Vortec Max engine that makes 367.

Throughout F-series history Ford has more often than not been the first to market with innovations that would go on to become industry standards. Several new ones are now in the ’09 model such as an integrated trailer brake controller, pull-out tailgate step, retractable box-side steps, stowable bed extender, and available cargo management system.

Among the best of these is the integrated trailer brake controller that Ford first introduced in its Super Duty series of trucks two years ago.  Now available in the half-ton, this feature will be of particular interest to the more than 50% of owners who tow regularly. But the F-150 also adds another towing feature – trailer sway control can sense yaw motion in the trailer (fishtailing) and apply precise braking and cut power to bring the truck and trailer back into line.

The F-150 is being built at the Rouge Plant in Dearborn, MI – another site where Ford let me peak behind the automotive curtain. If you’re wondering, this level of access was a bit unusual. In response Ford says it wants to be completely transparent in its business – I say I’m open minded but skeptical. And while I sensed that these open-house demonstrations smacked of desperation in tough automotive times – I also saw dogged determination and a steel plated confidence in its new truck.  Now we’ll see what the buyers think.

Howard Elmer is a truck and ATV writer living in rural Ontario. He wrote this report for CFI magazine.