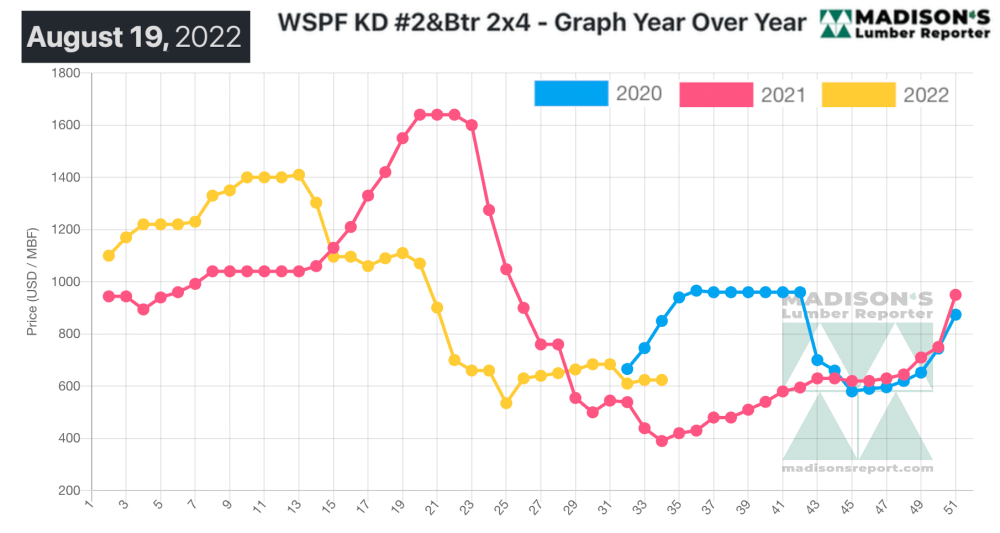 As we continue to enjoy summer bliss, the calendar moves inexorably into autumn. It is usual for this time of year for most lumber prices to be soft or softening, as most large volume buyers (i.e., large U.S. home builders) have received the wood they need for ongoing and expected projects. There is an interesting symmetry with current prices to those of two years ago; most lumber prices currently match those of late August 2020. This is similar to another interesting development, that the trend of lumber prices at the end of last year was almost exactly in-line with the year before. This raises the question: is 2020 the new baseline for lumber price highs and lows? Do the price changes in 2020 indicate the new annual trend, rather than the seasonality we have all been used to for the past several decades?

Only time will tell, however all can be sure Madison’s will be there to recognize any important indicators and inform industry of what to look for next.

There were still opportunities out there as multi-family construction in the U.S. appeared positive of late, there just wasn’t anyone around to make the lumber sales deals.

“The North American solid wood commodities market was quiet overall as hot weather put a pause on large swathes of construction, and throngs of players were away on vacation.” — Madison’s Lumber Reporter 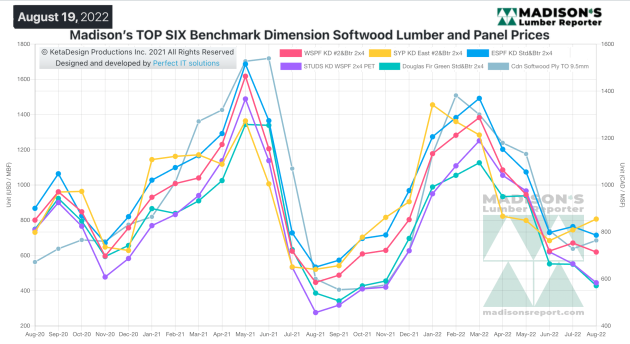 Western S-P-F purveyors in the U.S. were plunged into a lackadaisical late-summer slowdown. Sawmills maintained two- to three-week order files amid tepid demand as most players preferred to abscond to vacation spots rather than sling lumber and studs in the scorching heat. Mills struggled to move their low-grade material at current prices.

“Purveyors of green Douglas-fir items felt like someone had let the air out of the market. After a promising spate of sales the previous week generated by the re-designation of lumber futures and West Fraser’s curtailment announcement, urgency from buyers dropped off a cliff again. There was more inquiry than follow-through, as many players were hoping for another round of corrections before they would consider buying real volumes. Producers reported limited supply roughly in balance with weak demand. Douglas fir sawmill order files were into the weeks of August 29th or September 5th.” — Madison’s Lumber Reporter