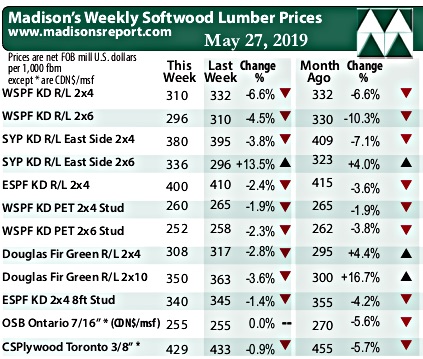 Couched between the Canadian long weekend for Victoria Day and this Monday’s Memorial Day in the U.S., the entirety of the North American sawmilling and lumber sales industries were last week at a total loss for why demand for solid wood construction framing dimension softwood lumber products was so low. Wholesaler prices (net FOB sawmill) of almost all standard lumber prices fell last week. With production order files at sawmills “prompt on everything,” sellers could do little but drop prices in an effort to get buyers to even pick up the phone and talk. It is really very unusual to be able to get any prompt wood at this time of year — apart from extremely specific higher-value specialty products — so for a sawmill’s entire range of products to be immediately available upon ordering during this normally high-volume production time of year could be troubling.

Sawmills couldn’t gain traction selling into any markets and barely even sold their daily production volumes. Buyers continued to sit on their hands, only stepping in to order what they absolutely needed.

Veteran traders of kiln-dried Douglas-fir lumber and studs were agog at this “historically bad” spring building season. Sales activity just couldn’t get going and players were sick of the “one step forward, two steps back” scenario they were faced with each week.

Those orders that were made shipped quickly as overall volumes of lumber in transit were significantly lower than expected at this time of year. Construction activity in the major U.S. and Canadian markets were frustratingly quiet. Softwood lumber traders wondered whether there will be any semblance of a spring rally before the market runs into potential supply constraints with the arrival of summer and fire season. Confidence and optimism were at all time lows, especially considering the time of year and clement weather in construction markets.

After purveyors of Eastern Spruce-Pine-Fir commodities in Canada got back from their long weekends on Tuesday last week they were treated to a small spike of demand that quickly fizzled out. Wholesalers and distributers described “bleeding out on pricing” when they put in orders for lumber. — Madison’s Lumber Reporter

The below table is a comparison of recent highs, in June 2018, and current May 2019 benchmark dimension softwood lumber 2×4 prices compared to historical highs of 2004/05 and compared to recent lows of Sept. 2015: