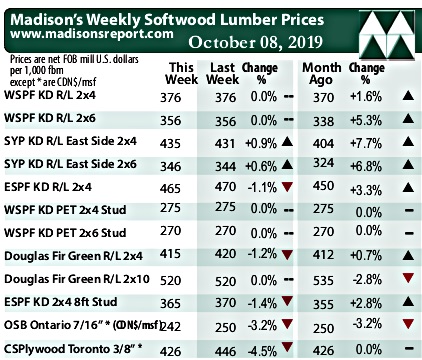 Benchmark item Western Spruce-Pine-Fir KD 2×4 #2&Btr stayed flat last week, at U.S. $376 mfbm. Last week’s price is +$6, or +1.6%, more than it was one month ago. Compared to one year ago, this price is unchanged. Canadian producers of WSPF lumber noted that buyers were pretty quiet last week. Sawmills turned their attention to receiving incoming log loads and fulfilling their own previously-made sales. Sales volumes were adequate for most of last week, but were “nothing to write home about.” Log inventories at western Canadian sawmills were lower than optimal. While construction activity was apparently hale and hearty in many U.S. regions, buyers in the mountain states were winding down their inventories in advance of approaching inclement weather. Keep reading to find out more:

Traders of WSPF lumber in the U.S. noted that sales activity took another small step back last week. Lower transaction volumes appeared to be the norm among sawmills. — Madison’s Lumber Reporter

Operators of kiln dried Douglas-fir lumber described their market as flat to toppish last week. Buyers were apparently in a tricky situation of their own making; wherein previously-made sales had to be fulfilled but price levels at both primary and secondary suppliers were not to their liking. Lumber users of all types have been carrying so little inventory in recent weeks and months, they were in a position of having to pay unpalatable prices to keep their own charges happy, even if at a loss. For their part, KD Douglas fir producers maintained one or two week order files at their sawmills, depending on the facility and item.