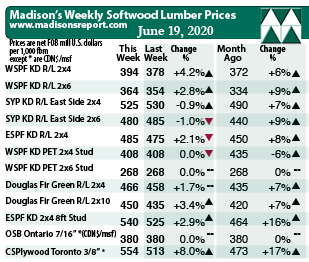 As described by Madison’s on June 6, “Wood Panel Prices Will Provide Indication of Remaining Summer Lumber Demand”. There are much fewer producers of this essential building material than there are regular sawmills of North American construction framing dimension softwood lumber. As well, input costs for wood panel products are much higher.

A spike in demand, whether for immediate repair needs or longer-term rebuilding, for plywood and oriented strand board (OSB) always causes a surge in price.

In Canada, Western SPF sawmills described demand last week as crazy, especially after the comparative lull that was the week before. Standard grade #2&Btr and High Line were the most mobile grades, with prices rising anywhere from $10 to $28 between the two. Demand for 8- and 10-inch were especially active as a contingent of Canadian buyers realized some British Columbia sawmills that are now permanently closed were heavy producers of wides, and that supply isn’t coming back.

For the week ending June 19, 2020, prices of standard construction framing dimension softwood lumber items waffled; as some improved, others fell, and yet others stayed flat. For its part, benchmark item WSPF 2×4 #2&Btr KD popped to US$394 mfbm, from US$378 the week before. The price for this benchmark lumber commodity was up +$22, or +6 per cent from one month ago. Compared to the same week in 2019 when it was US$402, this price is down -$8, or -2 per cent. 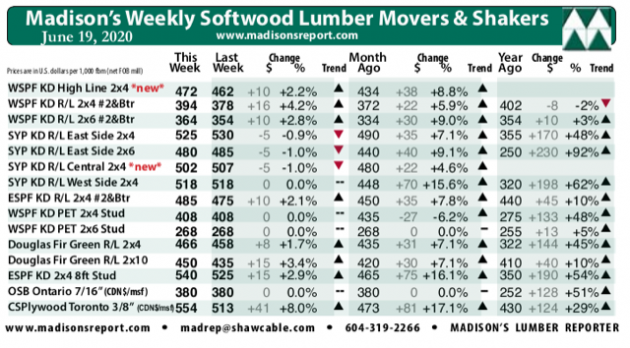 Sales of plywood in the Eastern Canadian market went bananas last week and its possible that’s just the beginning of a real price surge. Demand for OSB meanwhile was a snoozefest by comparison. US buyers helped the OSB market tread water while Canadian demand drove a super hot plywood market. With panel mill order files into mid-August, Canuck customers searching for plywood paid a king’s ransom to secondary suppliers to get the quick shipment they desperately needed. Oriented Strand Board was promptly available thus not a part of the sales conversation last week.

“Anxiety among buyers of Kiln-Dried lumber and studs increased last week as construction markets continued to progress in Western and Southwestern states, as well as in the US Northeast. Production levels at sawmills remained palpably behind demand, as has been the case for several weeks.” — Madison’s Lumber Reporter