Green. In a word, that’s what this year’s Detroit Auto Show was about; and for a change it’s not just lip service. There are wide and varied “green solutions” being offered by a majority of automakers – and while general consumer products are the main focus for the fleet and commercial buyer, more diesel offerings and two-mode hybrids are on the way. For the forest industry, it’s not a moment too soon. In a business where cutting back on the power needed or kilometres driven is not an option, what’s coming in the next two years is going to positively impact the bottom line. 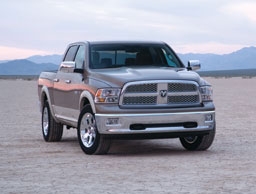 Green. In a word

Ford has announced that a diesel engine option and something they called “EcoBoost” (gas turbo direct injection engine) is planned for the F-150 in 2010. Dodge says its light-duty diesel will arrive after 2009, and a two-mode hybrid powertrain will be offered in the 2010 model year. GM on the other hand is building a two-mode hybrid pickup truck in Oshawa, ON, this year – watch for that soon.

The big news though is the debut of both a new Dodge Ram and Ford F150 this year. They appeared at the same show, which is the only thing these two have in common. For example, Ford has opted for less body change, while Dodge moved the shape of the Ram into a distinct next generation look. The F150 concentrated on smoothing and fixing the nagging little things that customers found since the ’04 launch of the last F150. Dodge did a major overhaul on its interior – one that was sorely needed as its last real upgrade was in ‘02. Ford took items that have been popular on its SuperDuty series, and brought them to the half-ton line. Dodge focused on some wow effect with very new features like available integrated lockable storage built into the cargo box walls.

Two different trucks, both with strong appeal, both made so much better than their predecessors. It’s a very good year for truck guys.

Ford F150 2009
Ford calls the F-series truck an icon, and the first rule with any icon (from a design standpoint) is don’t mess with it. What you notice on the new F-150 is a taller, squarer look, but one that still says Ford from any angle. It’s just enough of a change to be noticed – but that’s it – nothing drastic, nothing overblown. Instead, the design team focused on refining an already capable truck.

Chassis improvements have once again allowed payload and towing capacities to be bumped (figures are not finalized yet), and those changes, along with new side-curtain air bags, are expected to earn top safety ratings later this year. In anticipation of these higher towing numbers, the F-series is getting the integrated brake controller that also works with the truck’s brakes for greater stopping ability of trailered loads. This truck will also offer standard AdvanceTrac with RSC (Roll Stability Control) and Trailer Sway Control. A late ’08 addition, the available rearview camera system, will also lend itself to hooking up the boat or trailer by yourself. 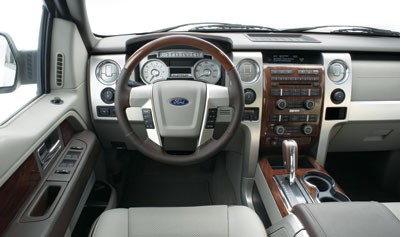 Another frame improvement shows up in the new second-row flat-floor in the truck. Here is the best example of a number of small things in just one area that have been fixed. The rear floor is now completely flat. Second, there is six more inches of room back there, courtesy of a stretched wheelbase and frame. Note – the six inches did not come out of the box – a sacrifice often made in previous generations. The rear seat folds up flat on the rear wall, using just one hand, and the cumbersome oversize hinges have been completely redesigned, and now do not intrude on the cargo space at all. When the bench seat is down, the added cab room has allowed a much more comfortable recline angle.

Moving to the back, I found two things that anyone who has ever had to climb in and out of a pickup box will love. First, the integrated step and handle (in the tailgate) that arrived last year in the SuperDuty segment will now be available across the line of half-tons. Second, a retractable side-step just ahead of the rear wheel on both sides lets the owner step up to easily place and retrieve items from the cargo box. Just kick a latch to have it swing out from under the box – push it back in with your boot, and it locks into place when you are done.

Ford has an all V8 lineup for 2009. The base 4.6L two-valve V8 is said to offer the same fuel economy of the outgoing V6, but with more power. Also available will be a second three-valve version of the 4.6L, and the veteran 5.4L, three-valve V8 that has been reworked – once again offering more power and better fuel economy. This engine will also run on E85. A standard six-speed automatic transmission will improve fuel economy.

No horsepower or fuel consumption estimates are currently available – I suspect some people in Dearborn want to see what Dodge is going to claim first. Production will start in the late summer, with units hitting dealer lots in early fall.

Dodge Ram ’09
Dodge wants to call this new truck a “game-changer” – instead I’d say they are in the second half of the same game they started in ’94 with the advent of a “big-rig” design that is only now starting to reach icon status.

The new interior features new seats, soft-touch material (rather than nasty hard plastic), new centre console, upper and lower glove boxes, power adjustable pedals, double the number of previous storage spaces, and first-time items like heated and cooled front seats; heated rear seats, and a heated steering wheel.
This half-ton also gets its first crew cab model. This means more space in back for people or cargo, with large back doors that open to about 85 degrees. Dodge has also added features like a new flip-up rear seat design,  a neat in-floor locker, and new rear-seat entertainment systems – though they didn’t get their floor quite as flat as Ford did.

Dodge has also now caught up on the safety front with standard ABS, ESP (Electronic Stability Program), a Trailer Sway Control that automatically tries to bring a trailer back into line by applying individual brakes and reducing power; and a Hill Start Assist – particularly useful with a manual transmission. 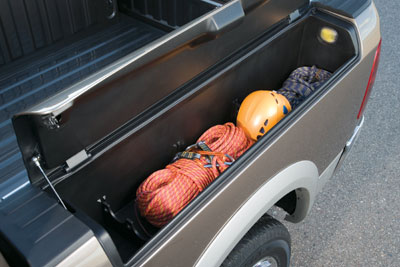 A key element in this new design is called “RamBox.” These are two weatherproof, lockable storage bins that run the length of a 5-foot 7-inch box and are as wide as the wheel well – creating a space big enough for a full set of golf clubs. The inside width of the truck bed stays at that magical 4-foot number despite the intrusion of these storage spaces, so it appears that the gains have been made without any space losses. The way the lids are integrated into the box looks pretty nice too. This item will be an option on the new crew cab only.

Under the all-new aluminum hood of the Ram you’ll get a 3.7L V6 as the standard engine, or you can upgrade to the 4.7L V8 which makes a respectable 310 hp. You can also opt for the reworked 5.7L Hemi that now punches out 380 hp and 404 lb-ft of torque (about a 10% increase over last year), but with what Dodge claims is a 4% improvement in fuel economy.  But one of the best claims I heard at the show also came from Dodge – they have announced that a new light-duty Cummins diesel will be available in the Ram half-ton sometime next year. This engine, in addition to being a “clean” diesel, will offer up to a 30% increase in fuel economy over a comparable gasoline engine.

The Ram seems to be a bit ahead of Ford in the race to dealer lots – probably getting models into dealer showrooms by mid-summer.

Howard Elmer is a truck and ATV writer living in rural Ontario. He wrote this report for CFI Magazine.