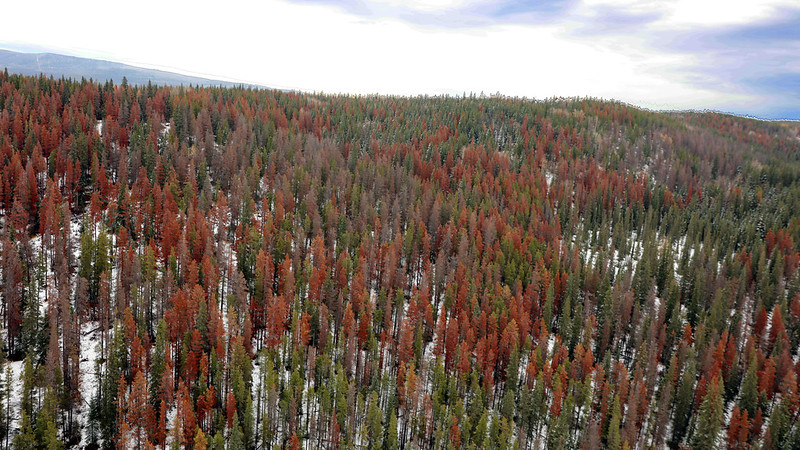 Beetle populations in Alberta have declined 94 per cent from their most recent peak in 2019. The drop reflects the continuous efforts to slow the spread following the 2019 and 2020 winter seasons.

“I have personally seen the effect of mountain pine beetles, and understand the risk that outbreaks pose for the livelihoods of thousands of Albertans and the resilience of our forests. I am pleased to see that our approach to controlling the spread of mountain pine beetles and favourable weather trends are having such a positive impact in many areas around the province, and we will continue to protect our forests for future generations,” said Todd Loewen, Minister of Forestry, Parks and Tourism.

To date, more than 2.4 million hectares of Alberta forest have been affected by the spread of mountain pine beetle, killing nearly all the pine trees in the most severely affected areas.

While a sharp, widespread decline in mountain pine beetle populations is welcome news for the province, the threat of resurgence still remains in some areas. Continued population pressure from Banff National Park, coupled with recent, relatively mild winters, mean that the Bow Valley, Kananaskis and Crowsnest Pass areas remain a priority for continued management and control.

Partnering with local and Indigenous contractors, Alberta’s mountain pine beetle management plan moves into its next phase, which includes control activities such as targeted, single-tree cutting and burning, whole-tree chipping and harvesting entire areas of affected pine trees as needed. Ground operations are underway to manage sites in areas of concern. In 2021, the average number of infested trees per site fell to about three, the lowest number since Alberta’s management program began, and a drastic drop from the 2009 all-time high of more than 18 per site.

There are 5.5 million hectares of pine in Alberta that is susceptible to mountain pine beetle. The value of this pine is more than $11 billion.