When asked how Apollo Forest Products has fared over the last few years, the mill’s plant manager Dale Slorstad  doesn’t hesitate when responding. “There’s no question, it has been tough,” he acknowledges. “However, a strong balance sheet, low debt and our people have pulled us through this.”
Slorstad, like a true northerner, adds, “when you live in the north, you have to make things work. We have a long-term group of employees at this mill and they are very innovative.” 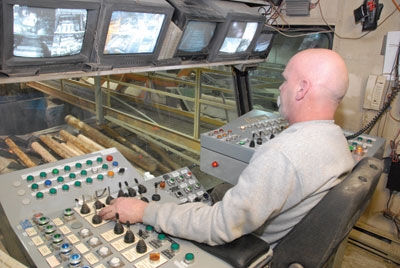 The Apollo mill, which is located about 10 kilometres outside of the town of Fort St. James in north central B.C., started out as a bush mill in the early1960s. It moved to its current site in 1969 and was established as a mill that could supply railway ties to BC Rail. “We cut ties at this mill until 2004,” says Slorstad. “At that point, we were dealing with a huge volume of mountain pine beetle infested wood and we couldn’t economically deliver the quality needed for the product, which is why we got out of that side of the business.”

By the time Apollo exited from the railway tie business, they were already a major stud producer as they started producing studs in 1976 as a residual product from the railway tie production. At that point, they built a new stud mill on the property and today, studs make up most of the mill’s volume.

Consistent Ownership
Slorstad says consistent ownership has also been key to the success of Apollo and two of the families that originally started the mill are still involved today.  The Andersen and the Stewart families now operate Apollo as part of Sinclar Group Forest Products Ltd. in Prince George, B.C., which including the Fort St. James mill, is involved in five primary mills (sawmills and planer mills) and three secondary (value-added) mills in the Central Interior of the province.

The Fort St. James mill has experienced some shift cutbacks over the past few years and has recently been running some four-day weeks, but Slorstad says for the most part, they have been running steady. That includes one eight hour and one nine hour shift in the sawmill and two eight hour shifts in the planer. Maintenance is handled on a graveyard shift. 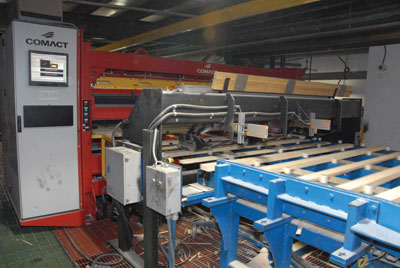 In addition to keeping everyone working as much as possible, the mill’s ownership has invested some capital in the Fort St. James facility during the downturn. That includes new Comact sorting and grading technology in the sawmill, and an energy project that converted the mill’s heat and power needs from gas and electric to energy drawn from an on-site Deltech 25 million BTU energy system. “We were one of the first mills around to move to bioenergy when we installed a 16 million BTU hot oil system in the early 1980s,” says Slorstad. “Today, with our 25 million BTU energy system and our older 16 million BTU energy system, we can heat the kilns and the mill with our planer shavings and we even have some left over to sell on the open market.”

Mill Flow
The Apollo mill is a fairly straightforward affair and what Slorstad calls “a one and one third line mill,” referring to the fact that they run one main breakdown line and a peewee line for logs under seven inches in diameter. He also refers to it as a “preferred length” mill, stopping short of using the term cut to length. “Our logs are cut into multiples of eight and nine feet in the bush, but we are not really what I would refer to as cut to length mill,” he explains. “The final decision on length is left up to our cutoff saw operator here at the mill rather than a logger in the woods.“

Incoming logs all arrive at the mill by truck and are offloaded with a Wagner loader. A cat 950F wheel loader is used to spread sample loads and to move inventory around the yard, while a Cat 325 butt-n-top loader feeds the mill. Once on the infeed deck and the cutoff operator has a full view, the final length decision is made and the logs are cut into lengths of 16 ft., 17 ft., 24 ft., or 25 ft., Next in line is a pair of debarkers – a  Valon Kone 22-inch model and a Cambio 26-inch model. Both debarkers feed to a slasher deck where the logs are slashed into eight and nine foot blocks. From there, the slashed logs are directed to one of three bins where they are sorted for size – small, medium and large.

The medium and large bins feed the canter line, which is from Comact and features whole log scanning and a log turning system. From here, any cants over six inches go to a CAE band saw, while anything smaller goes to what the mill calls the “six inch bin” and an edger.  A two-inch edger handles flitches from the band saw. Following the band saw and edgers, all product converges onto a common sorter line, which features grade scanning from Comact that was installed two years ago. Next in line is an older model 30-bin push bar sorter that was originally made by QM but was updated by Gemefor several years ago, and then a Gemefor stacker. The small log bin feeds the peewee line, which is from Optimil and features a centering conveyor feed. Product from the peewee line joins the main line prior to the sorter.

Once out of the sawmill, the rough lumber goes to one of four double track kilns – a 90 ft. and a 104 ft. Salton, a 104 ft. COE or a 104 ft. Muehlebach. Slorstad says the mill’s kiln dried products average about 32 hours in the kilns and they target a moisture content of less than 19%.

Following the kilns, the dried packages are fed into the planer mill with a continuous hoist infeed system from PLC. Next in line is a 24-knife Coastal planer that was originally a 16-knife model but was upgraded about seven years ago. Grading in the planer mill is completely automated and is handled by technology from Finnish manufacturer FinScan, but a team of three quality control supervisors regularly monitor quality throughout the entire sawmill, and the drying and planer mill processes. They check for saw deviation, grade and moisture content and the mill also uses LSize size control software to help the QC team keep a close watch on product tolerances. Other technology that will be added at Apollo later this year, includes Comact EdgExpert true shape and colour vision board edger optimization that can accurately detect knots, stain, splits and wane. “That should provide us with an uplift in recovery and value,” notes Slorstad, who adds that the mill is also looking at grade optimization upgrades in the planer for later this year.

Following the FinScan scanners, the main grade and length are directed to a stacker built by Nechako Mechanical from Vanderhoof, B.C., while any product that doesn’t make the main trim or grade is dropped to a secondary line that is equipped with a sorter and stacker from Comact. A manual strap and wrap station finishes the production line at Apollo and then inventory is stored in the yard until it is loaded onto a railcar or truck for shipment.

Markets and More
Approximately 80% of the mill’s production leaves the mill by rail with the balance departing by truck. As for markets, Slorstad says the breakdown is about 65%  U.S., 15% Canada, with the balance going to Asia and the Middle East. The mill also produces hog fuel, shavings and chips and in addition to fueling its two energy systems – the Deltech 25 million BTU system and the older 16 million BTU system ­– they supply  chips and excess hog fuel to Canfor’s pulp mills in Prince George.
The Apollo mill employs about 140 people, including production staff, management and support staff. That includes five people in the forestry group, who have the responsibility of keeping the mill’s fibre supply in top shape. They rely on an annual allowable cut of about 200,000 cubic metres with the balance of the mill’s fibre coming from private woodlot owners and B.C. Timber Sales.

For Slorstad, things at the mill are good right now. He has been at the helm of Apollo for eight years and has worked at the mill since 1974. He has a successful safety program in place, equipment upgrades on the drawing board, a top-notch energy program to help reduce costs, and a consistent corporate philosophy behind him with the ownership group at Sinclar. He is hoping the tough times are behind them, but looking forward, he says no matter what is thrown at them, they have a great crew and they will get through it.