Building main haul roads may be somewhat different in various parts of Canada, but there are lots of common challenges – and a strongly held common view that roads are vitally important. “We’ve always said that roads are the backbone of our operations,” says Deon Hamlyn, an operations superintendent at Corner Brook Pulp & Paper Limited in Newfoundland. “A poorly constructed road will cause grief for the entire time it is being used and can shut down a perfectly run operation.” 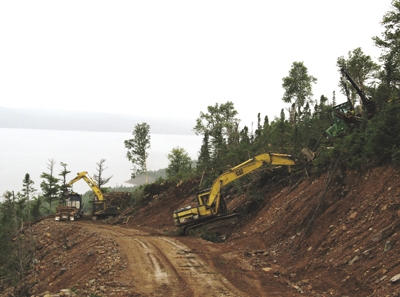 Road Building has numerous challenges right across the country. Pictured above Building main haul roads may be somewhat different in various parts of Canada

Although road construction for all but perhaps a few Canadian companies has dropped substantially since the economic slowdown began – at Corner Brook Pulp & Paper for example, it’s now about 100 km a year compared to 200 to 300 km a few years ago – the capabilities of contractors are more important than ever. “They must be people that are concerned and aware of all laws pertaining to water management, environmental issues, and health and safety of employees,” Hamlyn notes.

It’s extremely important to do roads right, agrees Howie Adams, co-owner of Devlin Timber in Kenora, Ont. Like most others across Canada, Devlin Timber is doing a lot of upgrading to old roads – many of which were built in the 1970s – rather than building new ones, and safety comes first. “We check and double-check signage, widths and stability,” says Adams. “We do brushing and resurfacing, whatever is needed.” Log loads are heavier nowadays than they were years back, he notes, with longer cabs and trailers as well (48 to 50 feet now versus 40 feet about 15 years ago), which means some of the older roads are also straightened whenever possible.

Similar Challenges
But no matter where roads – old or new – are being worked on, doing a good job is a matter of handling similar challenges. The biggest by far, says Dwight Pickett, also an operations superintendent at Corner Brook Pulp & Paper Limited, is wet weather. “For example, we only had two days in the last two weeks of April without rain,” he says. “We continue to work in it, but it really slows things down. The water mixes with the soil, and then you need to let the area dry out for about a week – and you don’t always get a week of dry weather.” Roads built in mid-September onward have to be left to dry out until the year after because of the consistent wet weather which begins at that point.

As much road building as possible is therefore completed in the drier part of the year, and long-term planning is a must. “About 75% of the roads we’re building now are for next year, and the other 25% we’ll use this summer or fall,” observes Pickett. He says there are a few roads built every year that can be used right away, “but there’ve also been cases where we’ve had to wait two years to use them.”

The company’s logging operations are now focused on areas that were harvested in the 1950s, and so like Devlin Timber, “We’ve moved into a period where we’re doing a lot of road upgrades instead of building roads,” Pickett says. “About a third of the roads we used last year and will be using this year are rebuilt ones and that will increase as time goes on.” Besides ensuring an old road is drivable, parts of it may have to be moved due to current legislation that didn’t exist when it was built. “If it’s too close to water, we have to do an alternate route,” says Pickett. The calving areas of woodland caribou have also changed road building and logging patterns to some extent in Newfoundland. “From May until September, we have to stay out of core calving areas, but we can be in part of the buffer areas around them,” he notes. 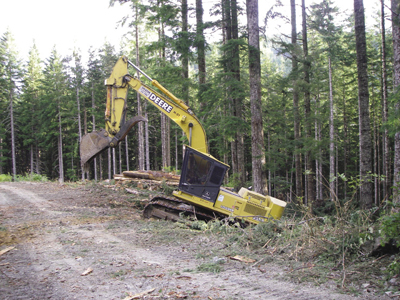 The Other Coast
Rain is obviously also a big challenge on Canada’s other coast. Although John Gregson says, “We can work year-round with second growth at low elevations in a lot of rain (on the west coast of Vancouver Island), even though it costs more to work in those conditions.” He also observes,  that “we do have to shut down periodically from November to March due to the weather.” Gregson is the owner of COPCAN Contracting Ltd. in Nanaimo, B.C., which has operations on both coasts of Vancouver Island as well as on the mainland. “We work in terrain that ranges from flat to steep ground, rocky to gravel conditions,” Gregson says. “We use a majority of John Deere excavators and bulldozers.”

Third party auditors check rain gauges on all sites to ensure erosion is minimized and safety is protected. “If there’s too much rain it causes too much mud,” notes Gregson, “and we have to quit.” 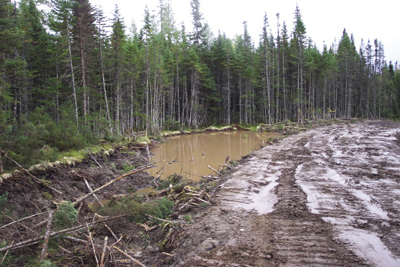 Like his peers in Newfoundland and Ontario, Gregson both builds new roads and rebuilds old ones – and water management is key to both good construction and maintenance. “It’s a matter of keeping water off the road and flowing properly (mostly by inspecting culverts),” Gregson notes. “Every creek and drainage is different, so you make sure you have a good plan and try to work when flow levels are low. You want to make sure the water is in the vicinity of the road for the shortest time possible.”  Gregson also notes that most of the old rail grade roads have a lot of stumps in the subgrade, and it’s sometimes cheaper to build a new road rather than fix these older ones. He also observes that blasting is more heavily regulated now than it was in previous years in British Columbia. “Our powder magazines must be checked daily for their condition and due to fear of theft,” Gregson says.

Wet weather, however, is not the biggest challenge in road building around Kenora in northern Ontario, according to Adams. There, it’s shallow soils. Swamps abound and little blasting is required. “The quality of soils is such a big challenge,” Adams says, “that when constructing a road according to the planned route, if we hit areas of extremely soft soil, we have to move the road.”

Still, lots of water management is standard. “The old roads get soft, so making sure proper drainage is in place is really important,” Adams says. For creek crossings, he favours bridges over large culverts. “Although they cost more, they give you a larger drainage area, avoid beaver dam issues, and better preserve fish habitat,” he notes. The application process to build bridges, which are all 20 feet or longer, can be six months or more. Adams uses Ontario Ministry of Natural Resources standard pre-approved bridge designs.

In that area of northern Ontario, all-weather roads are built up until frost and begun again when the frost comes out of the ground, which varies from year to year, says Adams. He mainly uses Komatsu bulldozers and backhoes with Kenworth trucks and John Deere front-end loaders.

Common Process
Main haul road building follows a common process, no matter where it takes place. It begins with planning department staff (within the company hiring the contractors) roughing out routes on detailed contour maps that have many items well marked, such as habitat areas and bodies of water. Special permits may have to be sought to work in some areas that are designated protected habitat. The route is then walked and changes may be made. Costs are also estimated at this point, and then either contractors bid or they pick up projects with predetermined price tags.

Sometimes what Pickett calls “profiling” is done – making a detailed plan for each road of how much fill and how many pipes of what size will be needed, degree of slopes, and more. “We used to do this with every road, but with staff cutbacks, we do a little less of it,” he says. “We try and achieve 8% slopes, and the use of blasting can triple our costs.” More blasting is needed on the east coast of Newfoundland where granite is common (along with peat bogs), but Pickett says the west coast has its high costs too. “There are steep slopes with heavy top soils in the west which can get extremely slippery in the wet weather,” he notes, “so we have to truck in fill.”

Pickett says their contractors use one or two excavators, working as a team, which is more efficient than bulldozers. After the base is built, topping the road with gravel or “pit run” is completed by a different contractor. “Topping is done the following year if the road is built in September or after,” he says. “We are still building roads up until December, and then we start building winter roads with snow and ice and debris.”

Maintenance of active main haul roads anywhere across the country is a matter of regular inspection and adding fill, removing brush and replacing culverts as needed. “On our inactive roads that we might not use for the next 10 years, we also do inspections from time to time, especially of the bridges,” says Pickett.

Using GPS
At Leon Degagne Ltd. in Fort Frances, Ont., almost all their current road work involves upgrading of old roads, but when they do put in new ones, they use GPS. Its use begins at the point in the process where the planned route is walked and continues in the backhoes, which Degagne finds more efficient than bulldozers in the shallow soil. They’ve used Garmin GPS units in their backhoes for the last three years and in their bunchers about five years. “It’s a lot faster and safer to use it than not,” says owner Leon Degagne. “It saves a lot of walking and wondering.” However, he admits that when it’s cloudy, “You sometimes have to wait or walk around a bit. But it’s still the only way to go.”

While GPS is also used to map out road routes in interior British Columbia, Maryanne Arcand says other tools are required as well. “Road building here is complex because the roads are mostly on Crown Land and require permits checked by many provincial ministries,” says Arcand, executive director of membership services at the Central Interior Logging Association in Prince George. “Roads are also used by many groups.” A software program called RoadEng, which takes all uses into account, is therefore an important tool to have before road construction begins. “Planning staff input all the different data and the program produces a road plan that will work,” Arcand notes. Mining trucks and moving mining equipment, for example, require a heavier road base and gentler slopes than do log trucks. “The program also accounts for traffic volume, working in where two-way traffic and pull-outs should be placed,” she says. “Maintenance levels may also have to be higher than they would be for regular logging roads because many First Nations communities use these roads as well, year-round.”

Any way it’s done, road building is crucial to the success of a company’s harvesting operations. Across Canada,
road builders face significant challenges, but with professional dedication, experience and even use of new technologies, they are taking those challenges in stride.

Treena Hein is a freelance journalist based in Pembroke, Ont. She produced this feature for Canadian Forest Industries.