“We were convinced that the fixed knives would increase the efficiency of mulchers compared to swinging knives, and this was proven to be right,” Denis says. “It gives the capacity to chip down much larger stems – up to 60 cm in diameter – compared to flail or swinging-knife mulchers where it was very difficult to go beyond 20 cm.” Using fixed knives, he says, also increased the overall mulching performance by at least 25%.

“The other important aspect to our design is that, compared to hammer type mulchers, it requires approximately half the horsepower to achieve the same results,” Denis notes. “You can consider that as a reduction of fuel consumption and/or an increase in surface cleared with the same horsepower.” Denis says as more and more excavator-mounted brushcutters/chippers enter the market, available horsepower is the real limitation, and that’s why choosing their design becomes so important.

Denis Cimaf mulchers also now have fewer moving parts. “The latest models for excavators are supplied with hydraulic doors, which gives better control of flying debris,” Denis says. “It also allows the production of finer chips, better performance on bushes and so on.” All Denis Cimaf models also feature cogged belts instead of the former ‘V’ belt system, which results in a better drive with no belt slippage. The company has also added a liner in the housing of the rotor, which can be easily replaced when it’s worn out and eliminates the need for welding new housing. Denis notes that his Roxton Falls, Que.-based company is well positioned in the eastern Canadian market and is expanding into western Canada, the United States and South America, mainly in Brazil.

The evolving designs of mulchers offered by Advanced Forest Equipment Manufacturing relate directly to the team’s constant hands-on experience in the field, treating over 4,000 acres annually with three mulching excavators. “The key to our success is that we are an active mulching contractor, working every day in the mulching industry for the past 30 years,” notes AFE president Jonathan R. Moffet. Beyond its U.S. sales, last year, the Hayden, Idaho-based company sold over $2.1 million worth of their “RDM Series” mulching attachments in Canada, Australia and New Zealand.

The RDM Series is unique, Moffet says, because you do not need a purpose-built carrier to operate them. “Almost every major excavator manufacturer now offers 15- to 20-metric-tonne excavators with huge hydraulic flows and high pressure, and they are superior carriers to support our RDM mulchers,” he explains. “We are now getting up to 90 gallons per minute to our attachments with most newer 20-tonne excavators.” The RDM design has a hydraulic thumb added to the standard digging spade feature, which means 14-inch trees can be quickly and easily mulched, or trees as big as 28 inches in diameter can be cut off at the stump, the limbs/tops mulched and the log decked.

“We operate our RDM mulcher attachments on excavators working on slopes over 60%, thanks to the digging spade’s ability to anchor into the ground,” Moffet notes. “The excavator literally pulls itself up the slope. These machines also can work rocky terrain extremely well.”

He notes that when using an RDM attachment, the operator can mulch within inches of a resource tree with no damage to the residual trees. “Working tight spacing is done with ease due to superior operator visibility and again due to the ability to pick the machine up and rotate on the excavator heels for tighter turning while not disturbing the soil,” Moffet explains.

New features offer complete accessibility to the machine’s components, both for straightforward checks and for more thorough maintenance interventions. These features include a completely openable hood and tilting cabin driven by an electric pump, which allow for inspecting all components in the engine compartment and beneath the cabin. There are also hinged side doors, easily opened for daily maintenance, and rear winch and hinged radiator guards that can be opened for quicker and easier radiator cleaning.

In its newest mulcher models, Superior, Wis.-based Barko has implemented new safety features such as hand rails, and new accessibility features such as a swing-out radiator and a more easily reached master disconnect switch. There is also a quick coupler for using other attachments such as rotary head cutters and snow blowers, says director of marketing John Major. “We’ve also added a new diverter valve to adjust flow for multiple-type attachments, and a new aux oil cooling package to handle a variety of heads.” The new ergonomically designed cab features dual joystick controls that can be customized for greater operator efficiency, and several optional features such as a rear-view camera.

Woodstock, Ont.-based Bron has launched its new 475 mulcher this year, which also features a new ergonomic style of cab, says sales manager Mark Odorico. “To increase safety, the cab now comes with 1 ¼” Lexan- LEXGARD on the front window,” he adds. “The cab seating is designed for operator comfort with height, headrest and seat tilt adjustments, and air ride suspension to eliminate operator fatigue.” The new cab also utilizes space more efficiently to give the user more comfort. The BRON 475 comes with C13 CAT Engine, built on a D4 undercarriage with heavy-duty planetary drives.

The Seppi STARFORST tree shredder is a compact and powerful mulcher with an especially aggressive new rotor. “Its newly developed, innovative three-point linkage with self-aligning mechanism makes it easy to manoeuvre,” says Seppi. The standard version mulches trees up to 40 cm in diameter with a working speed of 1 to 5 km/h, a double drive and a hydraulic rear hood. Options include a PTO drive shaft with torque limiter, and a centrifugal clutch.

PrimeTech, also based in Italy, has recently expanded its tracked prime mover mulcher lineup to include the new PT-175, the most compact and lightweight mulcher they have ever created. It was designed for operators already familiar with compact vehicles (such as skid steers) but who require a more powerful and productive alternative for expanding their options in medium- or light-duty work, says marketing assistant Eleonora Campana. “Its strong point essentially lies in its dimensions,” she explains, “which enable it to work on sites having stringent restrictions regarding vehicle width – at most 1.75 m.” The PT-175 offers 160 hp, with the other end of the PrimeTech prime mover lineup – the powerful PT-600 – offering 600 hp.

The wide tracks used in the entire PT lineup ensure a wide contact surface, and along with the long and oscillating undercarriage, provide extreme stability and extraordinary low ground pressure. This allows increased mobility on otherwise inaccessible terrain such as swampland. The PTs also offer easy access for maintenance, and the comfort and functionality of the cabin has been upgraded to include a level of soundproofing that PrimeTech says is the best on the market, with the lowest level of vibration, ergonomic positioning of joysticks and an easier-to-use control panel.

For contractors working in deep snow conditions or frequently mulching wood into the soil surface, Fecon has developed the alternative FGT smooth drum rotor system. “Four different tool options were developed for both the HDT and FGT systems, including knife and rock tools to complement the standard double carbide,” Slattery explains. The FGT Samurai cutting tool features a tapered edge and V-shaped body, which Slattery says achieves up to 50% more production over standard carbide tools on FGT-equipped heads.

Fecon also introduced variable speed motor drive lines, with hydraulic circuit designs and shift-points that maximize rotor torque and speed based on loads. “With productivity gains up to 30%, and advantages in hydraulic cooling, variable speed motors have become widely accepted as the industry choice,” Slattery notes. Fecon’s smallest model CEM36 has a unique direct drive variable speed motor, and is suitable for excavators of 7 to 16 t. The full range of Fecon’s Bull Hog mulchers provides options from 50 to 600 hp.

More Mulcher Updates
Fast change bits
Pro-Mac Rotary Brushcutters are available in rotary and horizontal shaft models for mount to excavators and back-hoes in three sizes - 36, 52, and 66 in, available with either two blades or three blades, or standard mulching disc units. The rotary cutters are also available in single or double door frames with options on standard duty or extreme service. These rotary cutters can be set up to specific operator requirements such as ground level clearing and cutting, and set up with the heavy duty mulching disc to cut and mulch standing trees -an excellent environmental option.

The bearing housings for the rotary cutters are built from the highest quality materials available and are equipped with three heavy duty, self-aligning, spherical roller bearings. The inside of the shroud is lined with qt100 to make it highly wear resistant. Power to the cutting tool is transmitted via a bent axis piston motor, through a shock-absorbing coupling to the cutting tool. The high alloy cutting bits are easily changed in minutes. www.promac.bc.ca

Risley Eclips Mulchers and Brushcutters
Risley’s rugged and reliable Eclips EX400 multi purpose carrier is powered by an 11 liter 400 hp, Tier III Cummins engine; and walks with the manufacturer’s high speed flex track, designed to ensure power, traction and floatation in steep and deep terrain. The Eclips is designed to work with major brands of mulchers and in ground grinder attachments as well as a multitude of other attachments. Risley’s Eclips EX400 has a long list of standard and convenient user friendly features; include the remarkably spacious and comfortable cab with its panoramic view, satellite ready stereo, air conditioning and heater, joy stick controls, and ergonomically designed seating ensures a safe and enjoyable shift. www.risleyequipment.com 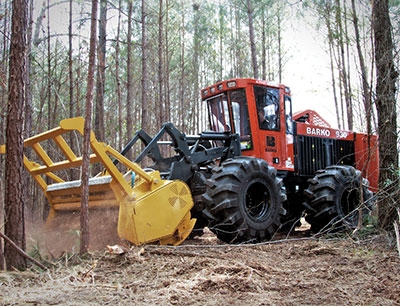