December 22, 2015 - Entreprises Alain Maltais doesn’t believe in putting all of its eggs in one basket. The Chibougamau, Que.-based company specializes in loading and transporting timber – about 20,000 m3 a week in the summertime and 25,000 to 30,000 m3 a week in the winter. But with less harvesting and hauling work available during the most recent forestry crisis, the company decided to diversify its operations and focus on multiple markets. 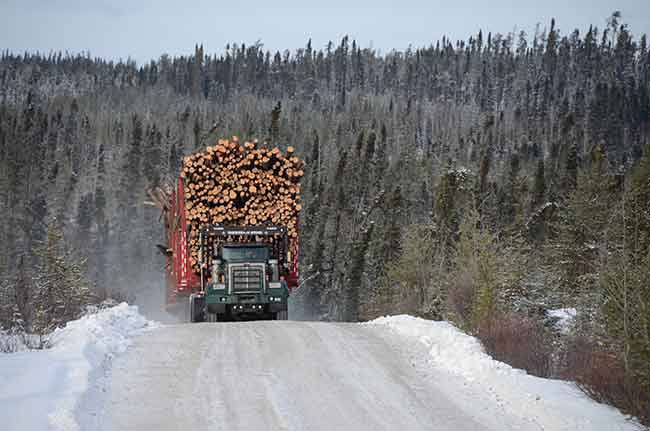 Entreprises Alain Maltais doesn’t believe in putting all of its eggs in one basket.

In addition to its timber hauling business, Entreprises Alain Maltais sets down gravel for about 50 kilometres of forest roads annually, and shapes another 40 kilometres of roads for Barrette-Chapais Ltd. and Chantiers Chibougamau, two large forestry product manufacturers based in Northern Quebec. The company also does work for the mining industry and Quebec’s Ministry of Transportation.

Humble beginnings
Entreprises Alain Maltais was started in 1986, when Alain Maltais, a mechanic for Barrette-Chapais Ltd., decided to leave the security of his job and open his own business. He had no idea of ​​the scale in which the company would grow 30 years later.

“It has not always been easy,” he says. “I had to mortgage my house to get through the difficult years.”

Alain started by investing in a single truck for hauling timber. His company now harvests almost 100 per cent of the volume for the Barrette-Chapais sawmill in Chapais, Que.

Alain’s son, Sylvain Maltais, grew up in an entrepreneurial atmosphere where he watched his father’s business flourish. His interest in the family business was almost immediate.

“I was born into it, I would get angry when my father would leave and not take me,” Sylvain recalls while laughing.

In 2006, Sylvain took over ownership of Entreprises Alain Maltais (Alain is still very active in the family business). For support during the forestry crisis, he diversified by adding three business partners: Martin Tremblay, Dave Jobin and Julie Laberge. Tremblay brought experience in the forests to the table, while Jobin brought his mechanical expertise and Laberge added management skills and leadership to the company.

“It is a multidisciplinary team,” says Laberge. “We trust each other 100 per cent in our areas of expertise.”

With the addition of the three partners, the company was able to successfully diversify its operations.

“It’s great to have people who can take the reigns of the company I built,” Alain says. “By finding new partners, the structure is stronger and it is a more dynamic team.”

To offset a reduction in forestry work in 2010, the company decided to do a large expansion where it diversified its activities, adding members of the mining industry and Quebec’s Ministry of Transportation to its client base.

Equipment upgrades
To reduce fuel consumption costs within its fleet, Entreprises Alain Maltais recently invested in a new Tigercat 880 for its log loading, shovel logging and processing operations. The company states that it has undergone savings of 10 litres per hour since the upgrade, representing nearly $30,000 in annual savings. They were so pleased with their purchase that they bought a second Tigercat 880 just 18 months later.

Increased productivity and overall fuel savings are vital for the operation, which sometimes trucks a large percentage of its harvested logs to the Barrette-Chapais sawmill from more than 200 kilometres away.

“We wanted a productive machine that consumes little fuel,” Sylvain said. “That represents a savings of about $30,000 per year. That is quite a difference for us.”

Positive outlook
With its operations servicing the forestry, road building and mining sectors, in addition to government contracts, Alain Maltais Companies has set itself up to tackle any obstacles that it faces.