It was show time in Prince George, B.C. in early June as Resources Expo 2010 kicked off with a new format. Formerly knows as the “B.C. Forest Expo” this year’s event covered several resource-based industries, including forestry, mining, oil and gas, and biofuels and bioenergy.

It was show time in Prince George

The three-day event showcased 174 vendors and attracted approximately 3,200 visitors, many of whom liked the new format. “They liked combining all resource industries,” said MaryAnne Arcand, co-chair of the event and the Central Interior Logging Association’s executive director of member services. “We had some challenges with the new business-oriented format, as many of the exhibitors assumed that the event would be the same as the old Forest Expo,” explained Arcand. “Having said that, we got lots of good ideas from attendees and exhibitors for the next event, and some very positive comments about the business-to-business piece in terms of real sales taking place, good solid leads, and the desire to see that aspect of Resources Expo further developed.  It’s tough to change a long-standing brand, but we (the Board of Directors) knew that going in, and so we’re satisfied.  We did hit our targets, and as the resource industries pick up over the next couple of years, we expect more interest from a broader cross-section of business and industry leaders.” 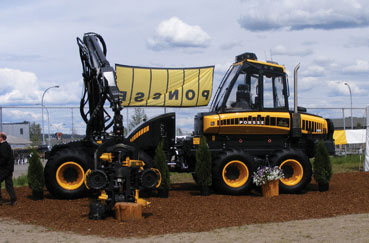 Arcand also noted that the event was well received by many of the major companies in the province’s resource sector. “We had great support from major companies, who sent their CEO’s or senior representatives to speak to their projects and/or industries, and were able to bring the most up-to-date information on northern projects to the contractors and companies who want a piece of the action.  That was our ultimate goal.”