Aug. 13, 2018 - Dan O’Brien wears many hats. First is his hard hat as the owner of one of northern B.C.’s larger logging contractors. O’Brien has been harvesting cut blocks in northern B.C. since 1992. Today his group of companies harvests 650,000 cubic metres a year. 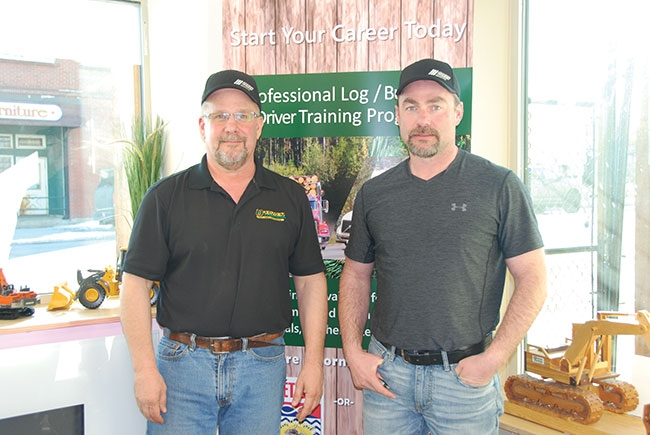 But as with many contractors, large and small, O’Brien struggled to find well-trained new hires to replace his aging workforce.

This challenge led O’Brien down a path to his second hat: still a hard hat, but this one has the word trainer splashed across the front.  In 2005 O’Brien started up O’Brien Training — a private operator training company out of Prince George, B.C. The company fills a void not only in the logging industry, but also other heavy equipment industries. In 2007 he acquired Taylor Professional Driving to train truck drivers.

O’Brien Training has crafted a reputation that sets them apart from others. The foremost advantage is that O’Brien himself is an end user. “We’re a large logging contractor in the area and we know the business. We’re not just trying to sell seats at the school. We have a vested interest to bring in more people into the industry,” O’Brien says.

Over the years the training school has graduated upwards of 1,000 skilled operators ranging from forestry operators to construction and pipeline equipment operators.

But O’Brien didn’t want his services to stop at graduation. In order to offer students the full package of training and a job, he acquired Core Recruitment — a job placement company — in 2013. “We really want to sell that full circle. When students walk through that door off the street – it’s an easy sell. We take the student, help get the funding, and give them the training. Then we find them a job. From start to finish they find it here,” O’Brien says.

Some graduates land work with O’Brien Group, which is an umbrella for the group of companies which include: O’Brien Management Inc., Mack Brothers Logging in Quesnel (West Fraser), Bid Right Contracting in Prince George (Lakeland Mills), and Titan Timber (Canfor), as well as O’Brien Training, Taylor Professional Driving, and Core Recruitment.

Training for success
Dardo Krueger runs the training and job placement companies for O’Brien, and has headed them for three years.

With the smaller of O’Brien’s two logging operation close to city limits in Prince George, the school is able to offer students training at a live logging operation. “They go right into a 20-load-a-day operation, and the student who is training is right in line with the other operators, so it’s as real as it gets. When you leave us and look for a job with other contractors, you know exactly what it looks like,” O’Brien says.

Aside from O’Brien’s own operations, the training school partners with a handful of contractors and hauling companies to offer field training. Many of those companies then offer jobs directly to the students.

O’Brien Training is also a preferred training partner with the Métis Nation British Columbia, and has partnerships with other First Nations to offer driver and operator training. “Working with First Nations has been a key part of O’Brien Training and Taylor Professional Driving since the beginning,” O’Brien says.

The company recently partnered with NENAS (North East Native Advancing Society) in a joint venture with two mobile training units as well as six stationary equipment simulators to bring the heavy equipment classroom to remote communities in B.C. where the work is.

The simulators will allow students to learn some components of their course in a classroom environment, which is more efficient for the trainers, and also reduces the student’s liability, since real (breakable) equipment is not involved until the student is ready.

Right now the simulators offer rock truck, dozer, grader and excavator training, as well as class one, three and five driver training. In the future the simulators could be programed to offer initial training on forestry equipment, which would be a big cost savings for the school and subsequently reduce the cost of tuition.

“Forestry operator students are out there running machinery that’s worth half a million to $750,000 a pop, and they can do so much damage when they get on. And it’s non-productive for a month,” Krueger says. “The contractor has to make $30,000 to $50,000 a month with that machine to make a machine like that worth it, so there’s a huge cost there.”

Harvesting background
The core business for O’Brien is still his logging operations. In 2018 they will build up to 100 kilometres of in-block road. Prevalent tree species in the area are spruce, balsam, fir and pine.

The conventional logger processes roadside, skidding up to 300 metres. “Quesnel and Prince George (Mack Brothers and Titan Timber) are both big wood operations — steep and wet ground. We use six-wheel skidders, lots of hoe chucking and tilter bunchers,” O’Brien says. Bid Right Contracting, which logs for Lakeland sawmill in Prince George, is a small- to medium-sized wood profile.

All four logging companies are on cycle times between four and seven hours, with 80 per cent of trucking subcontracted.

Both for operator productivity and to offer students training on the latest equipment, O’Brien keeps his iron relatively new.

“I’m constantly behind the scenes managing the equipment. We look at resale and cost per hour, and it depends on the machine. For skidders, roughly, we look at 6-7,000 hours, processors and bunchers are around that 10,000 mark, log loaders the same,” O’Brien says.

O’Brien runs a variety of equipment brands, including Tigercat, John Deere, Hitachi, Komatsu, and Caterpillar, complimenting those with Waratah and Southstar processing heads.

All told O’Brien Group employs upwards of 100 people, including partnerships and subcontractors. Unsurprisingly, many of his crews are well below the average age bracket. “I have one crew where 35 per cent is under 25, and from 25-35 is another 35 per cent. My supervisor on that crew is 35 years old, and he’s been with me since he was 20,” O’Brien says.

Big picture
Despite his contributions to the operator labour pool in B.C., O’Brien is still concerned about the future of the industry.

“I’ve been doing this for almost 25 years, and for the first time mills are starting to run out of wood. Mills in the last two years have had unscheduled shutdowns due to logging contractors not producing, directly caused by lack of skilled operators and truck drivers,” O’Brien says. “The end of the beetle kill wood is another reason, which has moved contractors into deeper, more challenging areas to harvest. With going to a greener profile of timber it has reduced the amount a volume that a log truck can haul compared to what they hauled in dead, dry beetle-killed pine.

“You’ve got the perfect storm happening. Less drivers, less contractors, and less operators, and the demand has never been higher,” O’Brien says. With lumber prices skyrocketing thanks to U.S. housing demand Canadian mills are scrambling to keep up, in spite of the U.S. duties on Canadian softwood imports.

There’s no quick fix, O’Brien says. Industry should have been taking steps years ago in anticipation of the declining number of operators. O’Brien says one solution would be that all licences contribute 25-50 cents per metre into a pool of funds used for training of forestry operators and truck drivers, and recruitment and promotion of this industry.

“Industry needs to get on board with training,” O’Brien says. “As long as mills are full and no one is running out of lumber, hey, it’s someone else’s problem. But it’s just not that way anymore. We have huge problems today and these problems are not going away. That concerns me, for the future of our industry, if we don’t get on board to make changes today.”