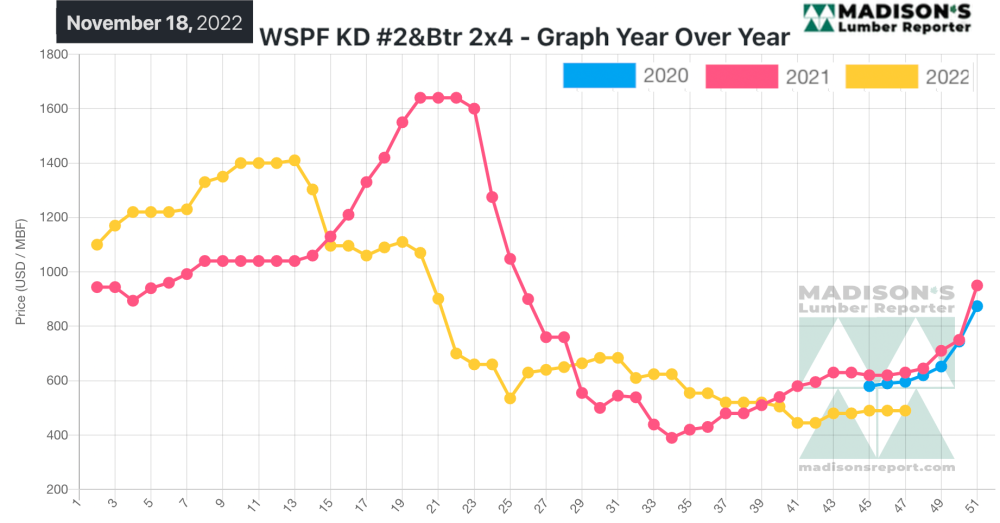 Even while actual prices remained flat, there was a general sense of the usual seasonal slowdown coming for sawmills and the lumber industry. This is because the order files at producers have shrunk from a month to barely two weeks. Expectations are, that as construction activity drops off during the winter months, lumber demand will also fall thus prices will soften. However, there have been significant curtailment announcements at several of the largest operators, suggesting that if enough supply is taken offline into the end of December, prices might remain firm even as sales slow down. It is important to remember that at this time last year there was devastating storm activity in British Columbia which destroyed the major highway in several places and also brought down the rail line. Should a similar weather emergency happen in the important timber supply or lumber manufacturing areas of the continent again this year, it might result in a sharp increase in prices.

Buyers ran lean inventory positions, with no indication that they will change that strategy for the balance of 2022. 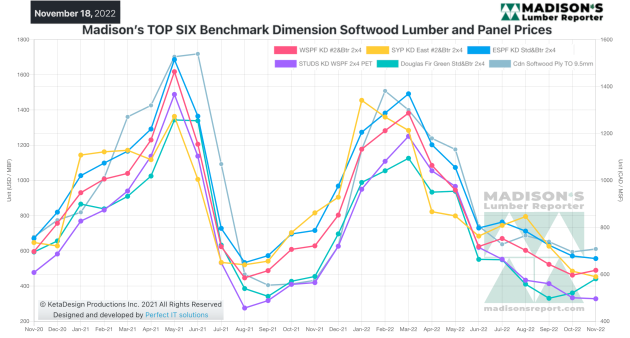 U.S. players returned from a packed and encouraging NAWLA Traders Market to find a Western S-P-F market that was growing more listless by the day. Sales volumes were small as buyers remained quiet for the most part. Wholesalers and distributors reported more action than the sawmills, and customers were only interested in highly mixed truckloads. Construction activity in most regions took a step back thanks to worsening weather across the continent. Transportation troubles were also more common as the snow began to fly.

While day-to-day business remained relatively consistent, if low-key, overall demand for Western S-P-F lumber in Canada continued drop. Suppliers reported mounting troubles with logistics as winter weather descended on most regions. Delivery timelines were noticeably less reliable lately. Interfor announced it plans to curtail production by approximately 200 million board feet in Q4 2022, representing 17 per cent of the company’s quarterly capacity. The reduction in output will affect all of Interfor’s operating regions and will be timed around the American Thanksgiving and Christmas holiday periods. The company expects to resume normal operations in January 2023.

“Some momentum was carried over into from a spike in sales the previous week, according to purveyors of Eastern S-P-F commodities. Sawmills held their asking prices flat where possible, with some items trading on either side of previous levels. Buyers had some ground to make up as they had let their inventories run perilously close to pavement in recent weeks. Demand wasn’t gangbusters by any means, but repeated revolving-door action kept suppliers busy, especially early in the week. Players noted that a spike of activity from manufacturers generated strong business around midweek, with sawmills content to sell at current print levels to clear some of their accumulated material. ” — Madison’s Lumber Reporter