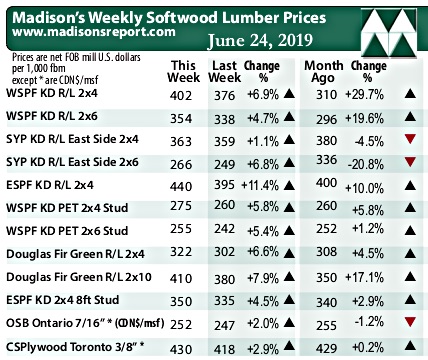 Confusion reigns still; however, Tuesday lumber futures on the Chicago Merchantile Exchange might provide some clarity, as it closed unchanged from Monday’s levels of just below U.S. $400 on the July and September contracts.

Sales activity wasn’t as “crazy” as it was the previous week for purveyors of WSPF lumber in the U.S. However, prices continued to advance and sawmills were definitely in the driver’s seat during negotiations. For their part, WSPF producers in Canada were “sold out” of 2×8 and 2×12 R/L #2&Btr by midweek, with their order files pushing into the week of July 8. Demand continued to ramp up from all over the U.S. and Canada as markets rumbled to life. Rail traffic shouldered increased transit volumes with no problem since sawmill production shutdowns and curtailments have taken so much overall production out of the market. Log decks at lumber manufacturers were fine for the time being.

After “pounding up hard” the previous week, prices of liln-dried fir lumber cooled off marginally last week. Asking prices, though, climbed regardless, by anywhere from $10 to $30. Prices of studs were another story, as production volumes have taken multiple hits from curtailments and shutdowns in recent weeks so sellers were able to bump up levels by quite a margin.