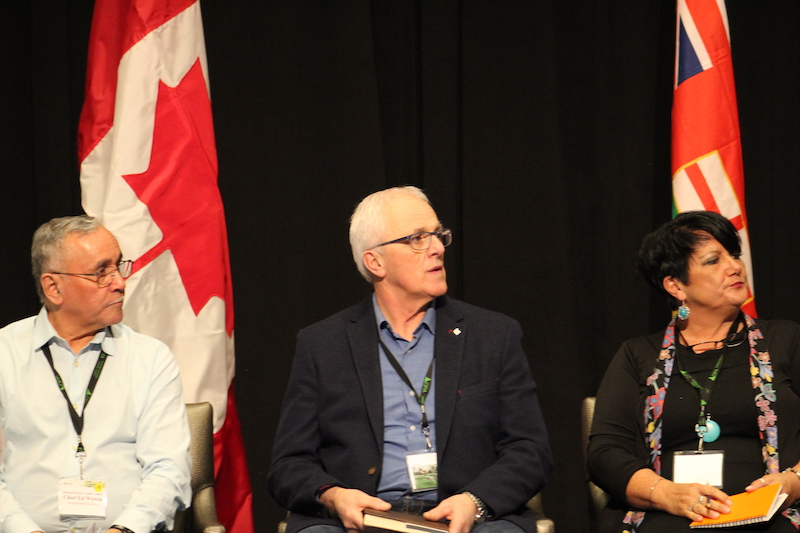 What does forestry mean for the Ontario Forest Industries Association (OFIA)? For OFIA, forestry is business, people and science. That was the theme of the association’s 76th annual meeting and convention, held Wednesday in Toronto.

In her opening remarks, Jamie Lim, president and CEO of OFIA, touched upon a few key issues for the Ontario forest industry, including sustainability and the Endangered Species Act (ESA) review.

For Lim, sustainability is not just a buzz word. “Our future viability, from both a business and a lifestyle perspective, depends on a healthy forest,” she said. She emphasized the need for continued government support in order to correct public misconceptions about the industry.

Speaking of support from the provincial government, Ontario Minister of Natural Resources and Forestry John Yakabuski addressed the crowd in the morning, encouraging attendees to participate in the ESA review. He said the government’s goal is a positive outcome for species at risk while reducing burden for businesses.

“Our future viability, from both a business and a lifestyle perspective, depends on a healthy forest.” – Jamie Lim, President and CEO, OFIA.

The minister also announced the forest access roads program will receive $54 million in funding this year, reassuring industry members, particularly in northern Ontario, about the government’s commitment to the sector.

Kevin Mason, managing director at ERA Forest Products Research, shared his analysis of the solid wood markets. As lumber supply in B.C. decreases, thanks to a drop-off in the amount of pine-beetle killed wood, log costs will stay high in that market, Mason said.

Consequently, more mills will close in B.C. “We think another billion to a billion and a half board feet over the next few years has to come out of production,” he explained. This presents an opportunity for other industry players in the country.

But overall, lumber demand is predicted to continue growing until the next recession.

Next, Hamir Patel, director of paper and forest products at CIBC, shared his insights on the wood products markets housing and demand outlook.

According to Patel, the U.S. housing market peaked in 2018, but the country’s aging housing stock has laid the foundation for a strong underlying R&R (remove and replace) demand. In contrast, Canadian housing starts are predicted to continue declining by 12 per cent this year, largely because of pricing concerns and availability.

Finally, Michel Vincent, chief economist at the Quebec Forest Industry Council, presented his thoughts on the profitability of the softwood lumber industry in central Canada.

As a commodity industry, the softwood lumber industry is directly affected by economic cycles. “But despite very good economic performance for businesses in general, the softwood lumber industry in central Canada has been profitable for only four of the last 12 years,” Vincent said. “And yet many people in the government or in the media strongly believe that all our problems are behind us because we have had a good few years of growth.”

But the softwood lumber industry in central Canada is not financially healthy. For the sector to make a full recovery, industry professionals must sit down with stakeholders including government, companies and First Nations, said Vincent. Companies must also innovate and differentiate their product offerings in order to be more competitive.

“The softwood lumber industry in central Canada has been profitable for only four of the last 12 years.” – Michel Vincent, chief economist, Quebec Forest Industry Council.

The OFIA presented its 2019 Forest Sector Champion Award to Lacey Rose, a forester for Renfrew County, and co-founder of Women in Wood.Rose received the award for her work elevating the status of professional forestry and promoting forestry through projects such as Mighty Jobs and Women in Wood.

The next session focused on the importance of using applied science in policy decisions. Dr. Darren Sleep, senior director of conservation strategies at SFI, explained how SFI’s requirement that certified companies participate in forest research leads to improved knowledge, which results in improved forest management practices.

These community leaders shared how forestry has connected their communities and called for more public education in order to change misperceptions about the industry’s forest management practices and commitment to sustainability.

“The environmentalists would have us believe that this was all at a cost to our environment, but there’s still trees out there, and there’s still bush for us to go camping in, because we were conscientious of what we were doing,” said Mayor Landry.

Mayor Landry emphasized the “human side” of forestry – its importance in providing economic opportunities and a good quality of life for many Canadian families in northern communities.

In order to raise public awareness, Mayors Landry and Sigouin, as well as Chief Wawia, argued forestry communities need a seat at the table with policymakers.

Mayor Sigouin added that the government should conduct a social economy impact study with regards to the ESA review. Chief Wawia echoed this sentiment, and also highlighted the need for more training and education to help First Nations become more involved in the industry.

To wrap up the event, Howard Hampton, colleague at Pilot Law, spoke about the challenges and opportunities that “creative destruction” presents in forestry. As climate change alters forests in the U.S. northwest, and storms impact production ability in the U.S. southeast, this opens up opportunities to increase production in and exports from Canada, he argued.