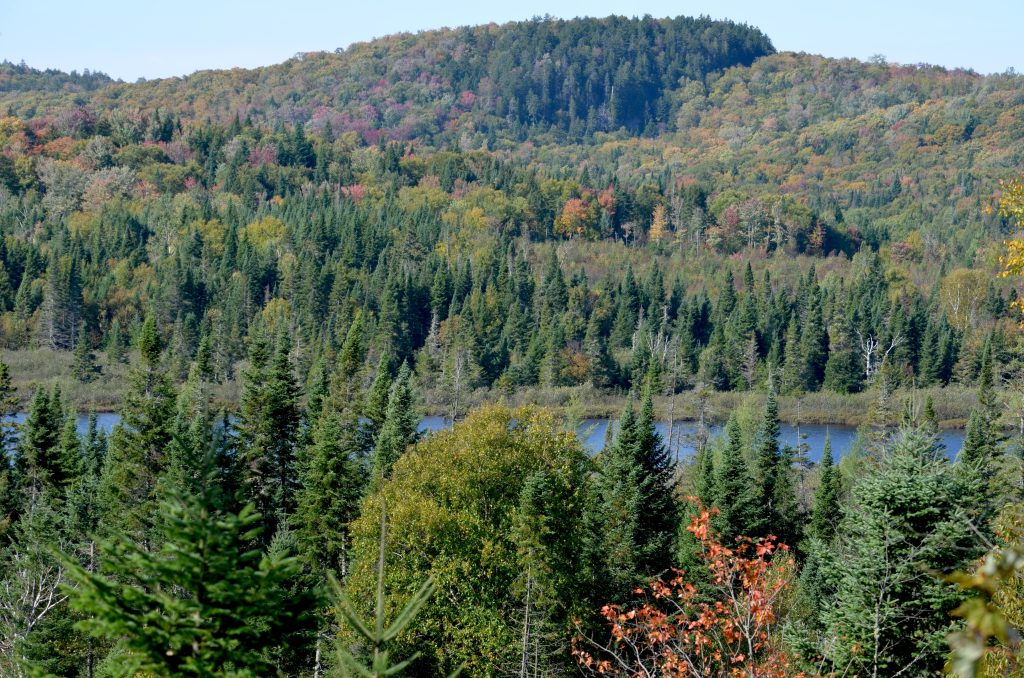 A young woman from Ontario is bringing together her appreciation of her Indigenous heritage and her love of the outdoors.

Isabelle Allen, 29, now living in Henwood Township with her husband Chris and one-year-old son Walter, has been working to get her message out for a more holistic approach to forestry, not only locally, but nationally and internationally.

A member of the Timiskaming First Nation, and a registered professional forester working with Wahkohtowin Development GP Inc., Allen has recently returned from Bali, Indonesia, where she participated in a panel discussion at the Forest Stewardship Council general assembly (a global organization dedicated to biological diversity and benefits to local people) about the Indigenous landscape.

She noted that the Forest Stewardship Council (FSC) can certify forests for environmental and social safeguards and “a lot of our local forests are actually FSC certified.” This is a higher safeguard than our government requirements, she noted during an interview at her home in Henwood.

Forest management is a great responsibility, she said, adding that she thinks about the Seven Generations principle in which “You’re managing for seven generations ahead, but you’re also looking back seven generations and asking, ‘would they be proud if they saw what I was doing right now?'”

Prior to that, Allen was in Sault Ste. Marie speaking at the annual general meeting about approaching forestry with Two-Eyed Seeing, a phrase coined by Mi’kmaq elder Albert Marshall to join both the Indigenous or holistic lens on the forest with the western or scientific approach, and the idea that the two views could be joined together for healthier forests of the future.

She also refers to the book Finding the Mother Tree: Discovering the Wisdom of the Forest, written by Suzanne Simard, and the realization that trees can communicate with one another through their root systems. Allen strongly believes this should be considered in looking at the future health of forests.

Her work in Indigenous forestry has brought her into the struggle for increased representation for Indigenous concerns in forestry practices, such as the end of herbicide spraying. Allen says it is generally accepted by Indigenous peoples that forestry must be practiced, but she said there are concerns around the protection of things in the forest, such as moose populations, water quality, streams, and medicine-picking places.

There are many Indigenous people who still live in forested areas and still obtain much of their food from the forests, she said.

The daughter of Christine Bolger and Lance Males, Allen grew up in Thornloe and Kerns Township, playing in the outdoors and enjoying camping and other outdoor activities with her family. She frequently visited extended family at the Timiskaming First Nation reserve.

When she attended Timiskaming District Secondary School she participated in the TERRA program (Teaching Ecological Responsibility, Recreation and Adventure), and it was there that she realized she could have a career in environmental science.

She attended the University of Guelph where she obtained a degree in environmental sciences with a major in resource management. She took the co-op program, working one semester in a related job, and one semester studying. While in Kamloops, British Columbia, working as a junior forester in her third year, she realized that forestry was the direction she wanted to take. She completed her degree at the University of Guelph, and then attended the University of British Columbia where she obtained a masters degree in sustainable forest management.

Allen encourages Indigenous and non-Indigenous youth to consider forestry as a career. There are few foresters who are from the area, she said.

She noted there is a forestry degree that can be obtained from Lakehead University in Ontario.

To work as a forest technician, a two-year college diploma can also be obtained, and it is also possible for people to step from high school directly into a career in forestry “if you have the bush smarts.”

Throughout her teens, she had been involved in environment-related activities. In 2011 she represented Canada in Tokyo, Japan, and was the recipient of an International Climate Champion award. In 2017 she received an Indigenous Youth in Forestry award from the Canadian Foresters Association. The ceremony took place in Calgary. Very serendipitously, the other recipient was Tristan Flood of the Matachewan First Nation whose father David Flood, the general manager of Wahkohtowin Development GP Inc., offered her a job. Allen says she is very glad to be working in Indigenous forestry. In the first year-and-a-half of her job, she was also mentored by First Resource Management Group and was able to participate in the preparation of a forest management plan.

As part of her interest in forestry and working outdoors, she and her husband Chris have started up Henwood Tree Farm where they are growing Christmas trees and other forest products.

Darlene Wroe is a Local Journalism Initiative reporter for The Temiskaming Speaker.