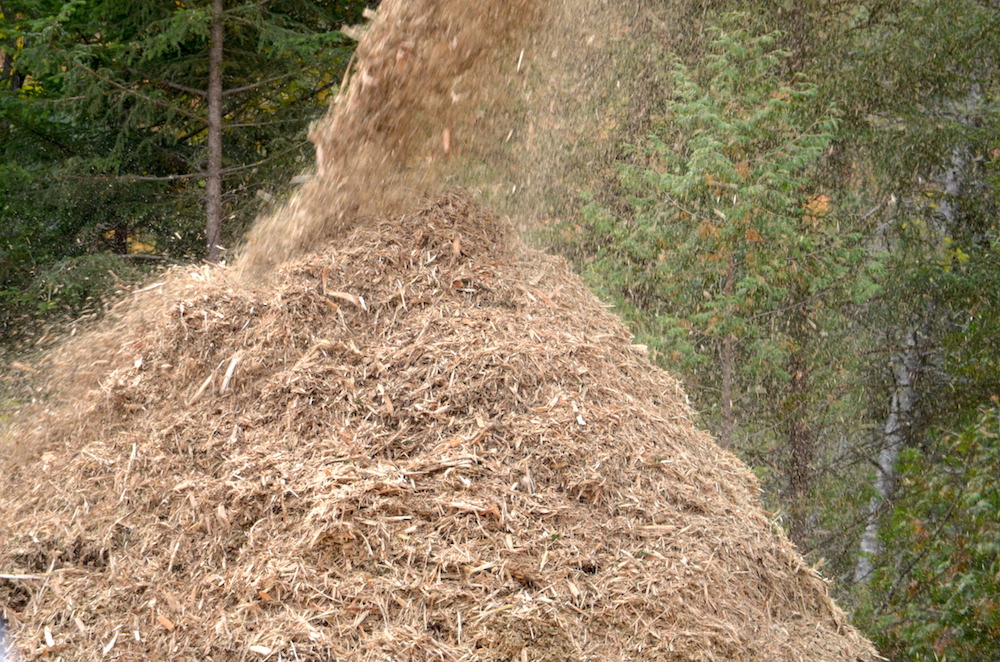 Ontario will soon be facing an unprecedented demand for new electricity supply as some of the nuclear plants, a major supplier of Ontario’s electricity, are taken out of service. Currently, the Northwest will also be short of power as a number of new mines connect to the provincial grid.

The current shift to green power is opening up new options for the generation of electricity that could help to meet the demand. Ontario Power Generation is exploring new hydro projects, but people living in the boreal forest region know there’s already another viable source; one that not only produces green renewable energy, but creates good paying, long-term jobs in the smaller communities of the province.

It is forest biomass, consisting largely of the left over wood from logging and sawmill operations.

A number of factors combine to make it an attractive way to produce future electricity across Ontario’s North.

The first is supply: almost every community in Ontario’s North is surrounded by the forest industry, making wood fibre a readily available resource. Furthermore, this supply has the potential to grow in the years to come. Today only 46 per cent of the province’s total allowable cut is being harvested each year, less than 0.5 per cent of Ontario’s overall public forest. Demand for sustainably sourced forest products is also at an all-time high and is expected to increase. The United Nations projects that global demand for forest products will grow by more than 30 per cent by 2030. Increased forest production will mean an increase in the supply of forest biomass available to the communities and industries that can use it.

A second advantage of using forest biomass to produce electricity is the positive contribution it makes to combating climate change. Canada’s boreal forest absorbs and stores extremely significant amounts of carbon dioxide. New growth continuously draws carbon dioxide out of the atmosphere, however, at some point absorption stops and old forests start emitting carbon dioxide. By harvesting mature trees to produce a variety of forest products, carbon is stored for many decades rather than being released to the atmosphere, further enhancing efforts to mitigate climate change. For wood fibre that cannot be used for traditional forest products, electricity can be generated from forest biomass, creating a reliable, renewable, affordable and climate friendly alternative to more carbon-intensive options.

Trees store carbon in the form of wood. Even when trees are harvested, carbon remains stored in the wood. Products created from the harvested wood like lumber, plywood, flooring, and furniture, lock away carbon in our homes and workplaces for decades. Even pulp, paper, and other consumer products, which are manufactured largely from wood left over from the production of lumber, store carbon through to the end of their life cycle. According to the Ontario government, public forests store an estimated 7.2 billion tonnes of carbon. However, wood products from managed forests store 25.5 million tonnes of carbon. This is comparable to the annual emissions from about 28.6 million passenger vehicles.

From an environmental perspective, according to the Pembina Institute, the consuming of wood biomass by itself, when compared to natural gas, produces 80 per cent less emissions.

Third, Northern Ontario already has a positive history of the use of forest biomass in the creation of electrical energy. Several existing and former pulp and paper mills, in conjunction with their respective sawmills, have used left over fibre as a fuel to generate steam and electricity for their own use as well as in some cases selling it to the provincial electrical grid.

There are currently five biomass facilities operating across the North – Atikokan GS, Resolute FP in Thunder Bay, Atlantic Power’s Calstock facility, Hornpayne Power and GreenFirst in Hearst. Three out of the five are combined heat and power facilities with the remaining two solely generators for the grid. All of those facilities are scheduled to have their power purchase agreements renewed for a five-year period. There are a total of 15 communities who benefit from the jobs and related economic activity that are created just from the existing biomass facilities.

Common Voice Northwest’s Energy Task Force has calculated that the region could be short as much as 220 MW of power by 2027 even with the existing biomass generators having their contracts renewed and the East West Tie in operation. Key communities such as Red Lake-Ear Falls, Sioux Lookout and Greenstone are already at their maximum capacity and require new sources of electricity if they are to grow. There is an opportunity in those communities for new biomass generation facilities along with district heat options.

Benefits for communities as well as industry

The generation of electricity is not the only benefit created by biomass, however. Biomass generators are a part of an integrated energy and environmental system. Historically, wood left over from the sawmilling process was either burned or deposited in a variety of land fill sites, in both cases contributing to the release of carbon dioxide into the atmosphere with no value to society. Using the biomass to generate electricity will not only divert usable fibre from landfills but will assist in moving natural gas consumers over to a district heating supply utilizing excess steam from the generator.

Distributed generation biomass facilities are a logical solution to this increasing demand. Ideally, the facilities would be strategically located to reduce fibre transportation costs (both financial and environmental) as well as the proximity to transmission assets that will connect the generators to the grid.

District heating is a system that is used in most if not all Nordic countries, especially those with limited fossil fuel supplies. It is also used in Canada in some northern communities as well as on educational, health and industrial campuses in more urban Canada.

Typically, a biomass generating facility creates electricity for the grid, transports its high temperature industrial steam to a nearby pulp and paper mill where it is used to dry the products. That steam is then piped to, and throughout, the nearby community where, using heat exchange technology, the heat is transferred to each building. No other source of energy is required to heat the buildings. In the summer, the system is reversed with the buildings using the heat exchange technology to cool the interior. This approach is one of the most efficient uses of a renewable form of energy – the forest.

The government of Ontario should adopt a biomass strategy that not only sustains the existing generators, but where possible, increases the further use of available biomass. That strategy should also facilitate, through approvals and financing, the creation of new biomass generation facilities to meet the growing electrical demand of the province along with incentives for the creation of district heating solutions for communities currently relying on natural gas for heating. Biomass fuelled generation and district heating is also an economic opportunity for a number of the remote Indigenous communities who will shortly be connected to the provincial grid. Surplus electricity could be sold to the grid while developing a constant flow of heat throughout the community. Of all the energy solutions, biomass, in conjunction with district heating, will create the most employment in small town Northern Ontario.

Iain Angus is the chair of the Common Voice Northwest Energy Taskforce, the former chair of the Ontario Forestry Coalition and a former vice-president of the Northwestern Ontario Municipal Association.