December 10, 2015 - Adapting to change is nothing new at Tolko’s Lavington sawmill and planer mill. It would be hard to stay in business if it was, since the facility has been standing tall in the town of Lavington, B.C. since 1956, when the Thorlakson family started its original planer mill. 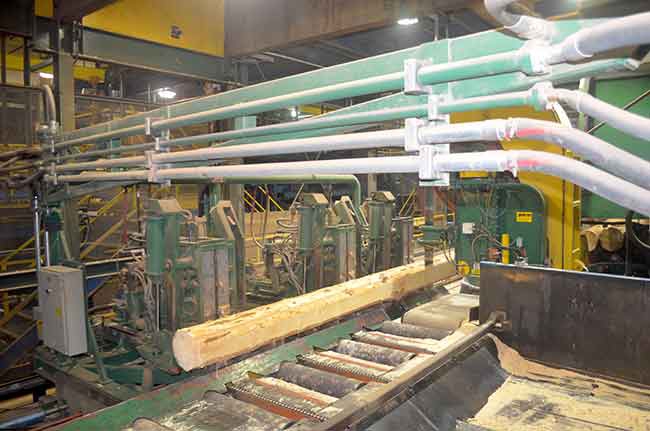 Tolko Lavington replaced its old head rig to help improve recovery and productivity at its sawmill operation Adapting to change is nothing new at Tolko’s Lavington sawmill and planer mill.

So when it came time to look at investing in a new head rig last year for its sawmill, Tolko was ready and willing to plan out and purchase the equipment upgrades needed to improve efficiencies.

Another reason for the investment was to adapt to the mill’s log diet, which has undergone significant changes over the years.

“We are seeing a larger log,” Ross says. “There’s an abundant supply right now of large diameter logs. The new head rig was all about being able to consume that larger log at a much greater recovery and improved efficiency. At our site we can process everything from a four-inch top all the way to a 48-inch log. Whatever we find in the valley, we can process.”

The Lavington sawmill currently processes several types of species: a spruce-pine mix, in which the sub-alpine fir is separated; a Douglas fir and larch mix, where the larch is separated at times; and hemlock.

When it came to deciding on a solution that would upgrade the sawmill’s efficiency and recovery while being able to handle the wide variety of species it processes, Tolko decided to invest in a Salem 7’ Bandmill Headrig with USNR optimization and carriage control.

“One of the biggest differences between the old head rig and the new one is on the optimization side, to make sure we’re making the right decisions with each log to maximize the value recovery and lumber recovery,” Ross says. “We have seen a fantastic improvement in our recovery on the new head rig, about 17 per cent when compared to the old unit that had been in place in Lavington for so many years. The slabber head and the double cut band make a huge difference. The slabber head basically saves a pass every time on the carriage. With the old head rig, we used to have to make that pass and just trim off the flares and big chunks of wood that you’d then have to deal with in your residual system, where that big slabber head just chips them right off and you don’t have to deal with them.”

Of course, the multi-million dollar investment wasn’t as simple as just going out and buying a new head rig. Although the head rig was built offsite, there was a lot of on-site construction that needed to be done in preparation for the mill’s latest upgrade.

“Because of the age of our facility we had to do a lot of excavation work, taking the old head rig out, pouring new footings, getting some new substructure and steel in place, and then dealing with the complexity of trying to get that piece of equipment into the middle of our mill,” Ross says. “It’s a fairly complicated mill the way it’s laid out today, it was a significant challenge. Over half the cost of the project was just getting the structural work in place.”

Old meets new
Although Tolko has invested in a variety of upgrades over the years, one of the challenges at the Lavington mill is that there are still some older components.

“The site has been around since 1956, so there are still some really old structural components to the mill,” Ross explains. “Over the years there has been a lot of new technology added to it, but when you compare us with a new “super mill” there’s a lot more complexity in what we do. In a perfect scenario when a log comes into our mill, if it takes the right path and doesn’t require any edging or any extra rework it’s going to make a minimum of 12 direction changes. Most of the new mills have three or four direction changes, so for us there are lots of opportunities for boards or logs to skew. Unfortunately, it forces us to require a bit more manpower and do a little bit more hands-on. We focus on managing the flow through the mill so we’re not overloading certain areas, because otherwise it presents some significant challenges. ”

The process
A Liebehher A934C and Wagner L4-115E sort the logs in the yard, which are then transported over to the log infeed decks by two new John Deere 844K-II loaders, and a CAT 966F.

The mill also has a Rosserhead debarker equipped with grinders on the top to grind any logs over 30 inches in diameter that can’t be processed by the company’s Nicholson A7 22” debarker or the Forano (USNR) 30” Cambio debarker.

Every log deck has the capacity to go out to either the mill’s Comact double-length infeed canter twin or the company’s new Salem head rig line for primary breakdown.

In addition to the new head rig, the company recently invested in SiCam real-time size control on the primary breakdown line.

“That way if we experience any manufacturing abnormalities our employees can react very quickly,” Ross says.

After the new Salem head rig performs the primary breakdown of the large logs, the timber is sent to either a Letson HSA-1 twin band resaw line for secondary manufacturing into timber products, or to the USNR HSS 12” vertical double arbour gang (VDAG) to be cut into CLS product. The mill also runs a USNR 6” VDAG for processing the smaller cants from the double-length infeed (DLI).

The Lavington facility produces a significant amount of value-added products in another effort to extract as much value out of the timber as possible.

“We do everything here from 3″x3″ all the way up to an 18″x18″ and everything in between,” Ross says. “We pull vertical grain clears, specialty products with the Douglas fir, anything we can do to pull additional value out of the timber. We also manufacture CLS products from 1″x3″ thru to 2″x12″.”

as well as adapt to the mill’s log diet

“We have to have a separate schedule for every different species, and then we moisture sort as well,” Ross explains.

The site also takes advantage of air-drying, due to the warm climate and airflow up and down the Okanagan Valley.

“We let Mother Nature take care of as much of the drying process as we can in the wet sort products,” Ross says.

A moisture sort is performed in the sawmill with an NMI moisture sorting system but it gets difficult to sort moisture content above 35 per cent.

“So when we set up our wet sort wood in the air-dry yard, we date-stamp it so we know exactly when it came into the yard,” says Ross. “One of the practices we use now is bringing the loads down to the weigh scale on a weekly basis, so each week we can take the new weight of the load, and with that, can calculate the exact moisture drop that we’re seeing so the kiln operators have a really good idea when the right time to put it into the kiln is, and for how long. It’s very systematic how they’re managing that moisture sort.”

Re-using residuals
Since the commissioning of the Pinnacle pellet plant at the Lavington site this past September, all of the mill’s green sawdust and shavings are used in the manufacturing of wood pellets, while most of the mill’s wood chips are sold to Celgar’s mill in Castlegar, B.C. and Domtar’s mill in Kamloops, B.C.

Legacy lives on
Tolko’s legacy mill in Lavington have continued to operate and thrive in the area, providing much-needed employment for 200 employees despite being an older facility. This is largely due to innovative practices within the sawmill, a dedicated and talented workforce, and knowing when to invest in upgrades.

Will the facility still be standing in another 60 years? Ross says the future looks good.

“Our belief is that the Lavington mill is going to be here for a very long time,” he says.