Nov. 25, 2016 - When the crew behind Teal Jones’ small log sawmill in Surrey, B.C., went shopping for a transverse trimmer optimizer two years ago to replace aging equipment, they had hefty demands. The mill has a product inventory of more than 50,000 and ships to markets all around the world. Much of the lumber is shipped out rough, so it has to be almost perfect coming off the line. 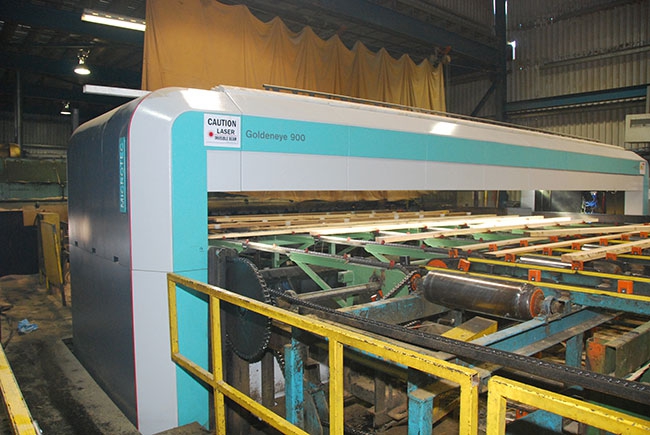 Teal Jones installed a Microtec Goldeneye 900 transverse trimmer optimizer in June to replace a system that was built in the 90s. When the crew behind Teal Jones’ small log sawmill in Surrey

“It’s not like we’re an interior mill where we get a cut and it goes on there for three years and you can fine tune it. We get on a cut for two days, and then we’ll go off of it for a month,” says Allan Bose, electrical superintendent for the mill.

The new trimmer optimizer had to meet the mill’s demands, and that meant handling the massive product list, and fitting into an existing mill flow that has been in operation since the mill was built in 2003. In June, the JS Jones Small Log Mill in Surrey, B.C., became the first mill in North America to install a Microtec Goldeneye 900 transverse trimmer optimizer. According to owner Dick Jones, the company is on its way to a six-month payback.

“We put a lot of our product through rough, so the grade out-turns have to be very accurate right out of the sawmill,” explains Dan Dewar, production manager.  “We cut for Belgium, China, Japan, the U.S., and our sizing, wane, defects – it all has to be there. This system is allowing us to do that reliably, and without trucking off-grade product to our other operations for drying and planning.”

The unique design of the Springer-Microtec unit allows it to offer a high-density scan of all four sides of the board in a compact footprint. The Goldeneye 900 combines four arrays of integrated colour and laser scanners offset at 45-degree angles with an ultra narrow “occlusionless” scanning conveyor to allow a full view of each board.

“We’re really just scratching the surface with this technology so far, but we’ve seen trim loss at our planer mills dropping from seven per cent to 2.5,” Dewar says.

In September, Canadian Forest Industries got a look at the new installation and toured Teal Jones’ small-log mill and its large-log Stag Timber mill, both of which are located next to the Barnston Island ferry terminal on the Fraser River. The mills are two of Teal Jones’ nine operations, which include timber harvesting, log sorts and planer and sawmills, in B.C., Washington and Oklahoma. The company employs about 1,200 people, and is the largest privately held forest products company operating on Canada’s West Coast, wholly owned by brothers Tom and Dick Jones.

Family is part of what connected Springer-Microtec to Teal Jones, says Norvin Laudon, Springer-Microtec’s chief technology officer. “Our company’s owner Gero Springer is based here in Vancouver as well. His grandfather started in 1956, so there are a lot of parallels with Dick’s and Tom’s business – private and family-run.”

When it came to realizing Teal Jones’ requirements of a new trimmer optimizer, the job, for Springer-Microtec, was unprecedented, Laudon says. The software had to be altered to provide for thousands of products.

“It’s a 24-foot mill so they have quite a few length combinations you can make,” Laudon says. “They’ve got a route behind the trimmer for a piece of the board to go back to a reman where it can get re-sawn in thickness or re-edged in width, so what we had to do was basically be able to evaluate all kinds of smaller products inside the real board.

“We produced a document that defined exactly how we proposed to do it and we gave that to the mill. And that’s what ended up being implemented. To get changes made in software, you have to have a really clear, exact specification and that’s what we had to work on right away. And then the scanner itself is the same as all the other scanners we have sold, mechanically and electrically, but the massive product list is definitely something we had never seen before,” Laudon says.

In-house installation
The install itself was less complicated than expected for the team, says Dragomir Djuric, maintenance supervisor for the mill. “Most of the work was setting up our existing machinery with the new one, and that required a bit of modification. Other than that, the installation was just plug and play pretty much. It was faster than we predicted.”

Installation was completed almost entirely in-house, and finished in just 10 days. Initial testing took place after just seven. The optimizer is manufactured in Italy so there were some challenges for the Teal Jones’ team, such as chain spacings that are in metric, one-metre multiples, but nothing was insurmountable, Bose says.

“All the cables, the wiring, everything was run by our electricians, so by the time we installed it they were already partially invested in the project. Same with the mechanical people, they had to do a lot of pre-work. We designed and our team installed the stand. The team helped put the scanner together when it was on site. Before we even put it in, we were already working on it. People get more enthusiastic that way as opposed to if we had contracted the whole thing out and we stood back and watched,” Bose says.

Springer-Microtec’s system snugly fit in with the mill’s current equipment line. Logs coming into the mill are moved by a Peco whole log bundle crane before heading to a Nicholson twin ring 27-inch debarker. The logs are then treated to a sixty-inch circular cut off saw, and an Optimil double length infeed canter line with USNR vertical quad band saws, Porter optimization and Optimil controls. Next logs are fed into an Optimil four movable head, eight axis profiler, USNR 10-inch vertical edger, Flare bull edger that is Sixty inch wide, with six shifting saws on one side and a gang cluster on the other. The edging is done at the Optimil four saw optimized edger, complete with USNR optimization. Between six and 10 per cent of the product is sent to a twin vertical resaw for remanufacturing lumber. The line is complete with a Newnes (USNR) drop saw trimmer and 62-bin sorter with Lucidyne sorter controls, Newnes (USNR) stacker, and Signode package strapper.

Sawmill manager Dan Doyle, who started with Teal Jones’ in March, says the team was skeptical of the project at first, but ready to make it work. And Springer-Microtec was determined. Critical to the project’s success to date has been clear expectations and responsibilities on both sides. “Our team really drove what they needed from the system, and were very well prepared for the install. Springer-Microtec really came to the plate and supplied what our team wanted in a timely manner.

“This room,” Doyle says, motioning to the boardroom where the interview was taking place, “was warm and sweaty for quite a few days before the project actually took off and these boards were full. There was all a lot of good brainstorming and working together to make it happen.”

User friendly
Kelly Murray, optimization sales co-ordinator, works closely with the new Microtec optimizer and says that the system is user friendly when it comes to setting up new products or changing runs, something mill staff often do to keep up with the product list. “What would’ve taken me a couple of hours with the old system, including mill checks and fine-tuning, I can now just do by setting up the grade in the system. I know what grade I want, I just put the dimensions in, and I don’t even need to go look at it.”

Springer-Microtec built in a searchable database into the software to allow the Teal Jones’ operator to search the product list and plug in a new product dimension easily.

“To add a product in the old one, you had to add 20 different thicknesses or width or wane parameters and you had to mathematically figure it out on your own,” Murray says. “Now I just say I want 25 per cent or 10 per cent and it does it all for you so it’s a fraction of the time. And if you know that it looks right on one product, it looks right on this product. Every single one is standardized.”

Saving time means saving money for the small log mill. Last year the mill’s annual production was 168 million, and they are on track to exceed that number this year. Species include red cedar, hemlock, Sitka spruce, cyprus and Douglas fir, diameters ranging from a four-inch top to 25 inches, with the average log 10-12 inches.

The Goldeneye 900 system is currently scanning for geometric defects as well as knots and splits. Microtec is working with the mill to fine tune its rot recognition module, which is expected to be running this fall. In the end it is partnership, Laudon says, that made and continues to make the project a success.

“The Springer-Microtec startup crew members who came to do the mechanical and electrical install, they have installed dozens of scanners, and they mentioned this team at Teal Jones was a great group to work with. Having installed this scanner in various sawmills all over the world, they were especially impressed with the preparation and efficiency of Teal-Jones’ team. If you needed something done, it happened.”

Teal Jones installed a Microtec Goldeneye 900 transverse trimmer optimizer in June to replace a system that was built in the 90s.

The large log mill cuts logs, in general, larger than 16 inches using a log carriage and eight-foot bandsaw. The mill’s old optimizing system was about 20 years old and caused some concern due to its age and lack of parts availability and support, says Allan Bose, electrical superintendent for the mill.

The mill installed an Autolog scanner system in the fall of 2014. “Since that time it has performed very well and has been virtually trouble free,” says Bose.  “The installation crew from Autolog was very good and they were very well supported by the engineering staff at their head office. The close working relationship between the on-site and head office crew was very obvious and sped up the start-up curve. Any software changes requested were compiled at the head office and installed by the on-site crew very quickly.”

To adapt to the new system, the head saw operators were trained not only on how to use the Autolog system, but also on log optimization. The optimization part of the previous system had not functioned for some time and operators were accustomed to making log cutting decisions themselves.

“The operation is quite easy with our supervisory staff entering the optimization parameters and the operator only having to trigger a scan when he wants an optimized decision,” explains Bose. “We do not utilize the optimized breakdown on all of our cuts as a lot of our cut decisions are based on visual appearance rather than volume recovery. It has been more difficult to get the operators to consistently give up manual control for the increased recovery that we get from optimization, but it has been a valuable change for us that has resulted in more profitable operation.”