April 5, 2016 - Boucher Bros. Lumber knows all about maximizing the value of the resources it has available. The northern Alberta-based company was recently looking for improved optimization and flexibility of its products at its planer mill in Nampa, Alta., which has an annual production of 46 MFBM, producing a variety of dimensional lumber as well as some timbers and decking. 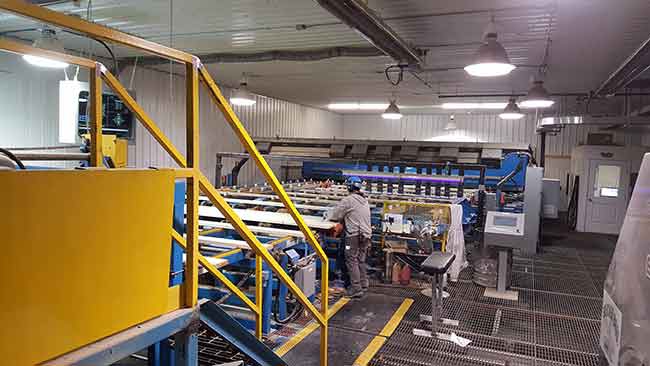 One reason for Boucher Bros.’ recent investment was to counter a shortage of trained staff in the area. maximizing the value of the resources

But a shortage of trained staff was hindering its ability to reach its goals. To solve this problem the company decided to invest in new technologies for the planer mill, which included a VAB planer mill grading optimizer and a Carbotech trimmer and transfer line, as well as new controls for the planer upgrades supplied by DO2 Controls through Wolftek Industries, the sole supplier on the project.

“We distributed all the equipment and supplied the installation crew, we quarterbacked the whole thing but we all worked as a team,” says Scott Sutherland, sales manager for Wolftek.

Altogether, the investment for the improvements put into the near 40-year-old planer mill totalled approximately $3.5 million.

“The VAB board scanner was installed because of lack of trained staff and to improve 2Btr percentages and to also allow more flexibility of products,” explained Jason Boucher of Boucher Bros. Lumber.

To install its latest equipment, the company shut down the Nampa planer mill for three weeks. Boucher says the challenges during the installation were minimal.

“As far as the learning curve goes with the new equipment, it was very steep for a short time but the crew quickly fell into a groove,” he says. “Good support from VAB helped our quality control person gain the knowledge they needed in order to monitor and make changes to the system. The trimmer system was fairly straightforward and the issues most often were control issues, which were quickly dealt with by DO2 controls.”

The biggest advantage to the upgrades is the flexibility the planer mill now has for its products and trimming. The mill can now run at much faster speeds.

“Our trim loss has come down by two per cent,” Boucher says. “Our 2Btr has improved by five per cent.”

Another advantage of the upgrades was the company’s ability to eliminate a few labour positions, which were presenting significant challenges for the company due to a lack of available skilled workers in the area. The mill currently employs 54 people.

THE PROCESS
Logs are moved around the yard by Komatsu Butt-N-Top log loaders and a Volvo A30 Rock Truck retrofitted with a log bunk and trailer. The logs are then unloaded with a Prentice 625 pedestal crane.

The Nampa mill processes a combination of spruce and pine, with spruce accounting for 85 per cent of the logs and pine making up the remaining 15 per cent.

The logs are first debarked by an A5 27” Nicholson debarker and are then sent to a single saw, cut-off saw that bucks and categorizes the lengths and diameters of each log.

The small logs go to an R200 HewSaw with a log turner and Prologic controls and optimization, while the large logs go to a double arbor Cardinal Headrig and are scanned and optimized through an Autolog optimizer and controls. Cants flow to a PHL double arbor bull edger. The wood is then sent to a PHL board edger.

The boards are then sorted by different grades at an S.Huot sorter and sent to a PHL stacker.

AT THE PLANER
The lumber is transported via forklift onto a tilt hoist that feeds the landing deck that moves the lumber to the planer feed table. After travelling through a PHL planer, the lumber is fed directly into the VAB optimizer.

This upgrade is advantageous to the mill since the lumber now moves straight from the planer into the optimizer without requiring a board length between them.

“In a lot of these cases with grade optimizers you have to have a lot of length between the optimizer and the planer,” Sutherland explains. “But with this one we didn’t do need to do that… a lot of the time a mill would have to do a merry-go-round system and send the boards back into the line.”

After travelling through the optimizer, the boards are sent to a landing deck that feeds into the new Carbotech lug loader, which sends it to a VAB warp detection system, then into a Carbotech fence and trimmer.

The lumber then goes to a Z-Tec Automation Systems printer, which was specially outfitted for the colder temperatures in northern Alberta.

“They had to design a case around it to deal with the -30C weather,” Sutherland says. “It’s so cold you can’t use a pen in your truck out here.”

After being processed by the printer, some wood products drop out of a gate for manual stacking while the main products go out to the PHL stacker.

The lumber is then sent to a COE Manufacturing kiln to be dried. The kiln dries 155,000 fbm per charge.

One reason for Boucher Bros.’ recent investment was to counter a shortage of trained staff in the area.

RESIDUALS
The residuals from the operation are shipped out of the mill for use in other applications. The bark and chips go to Daishowa-Marubeni International Ltd., an integrated forest products company and pulp producer in Peace River, Alta., while the sawdust shavings are sold to the oil industry for use as an absorbent.

SMALL MILL, BIG THINKING
Sutherland says the Nampa planer mill is one of the smallest mills he can think of that has invested in this level of auto grading.

With its latest investment, Boucher Bros. Lumber has given itself the opportunity to improve the quality of its wood products while lowering labour costs, despite a lack of available skilled workers in the area. Thinking outside the box to overcome staffing challenges while improving quality has optimized the mill’s chance of a bright future.