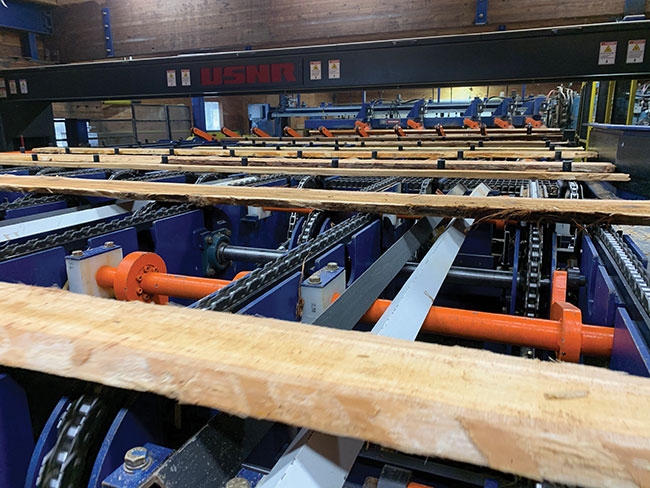 Revelstoke, B.C., like many other forestry communities in the province, has seen the number of sawmills in the area dwindle in recent years. But, there’s one sawmill left standing: Downie Timber. The mill, now owned by the Gorman Group, has been a staple in the community since 1950, and recent upgrades will ensure its success for years to come.

Gorman Group acquired the sawmill, along with a planer mill and nearby remanufacturing facility, in the early 1990s, says Angus Woodman, Downie Timber’s operations manager. The company has three locations in B.C. and consumes 1.2-1.4 million cubic metres of wood per year. Gorman Group harvests 700,000-800,000 cubic metres annually and purchases the remainder through BC Timber Sales or industry partners such as Louisiana-Pacific (LP), Tolko, RCSC and Stella-Jones.

Approximately 285 people are employed at the sawmill, the planer, and the remanufacturing plant. The mill runs two eight-hour shifts per day and has a production capacity of 110-120 mmbf per year.

Downie Timber specializes in Western Red Cedar, although it also runs hemlock, fir and spruce. The mill produces cedar boards ranging in size from 1×3 to 2×12, as well as 4x4s, explains maintenance manager Mike Holland. Some of the products are sent to the remanufacturing facility to become siding, components for planters, fish planks, or T&G products, while residual wood chips are sent to the nearby Mercer and Domtar pulp plants.

The majority of the products go to the U.S. Gorman Group has a remanufacturing facility in Oroville, Wash., which takes approximately 30 million board feet from Downie Timber. Meanwhile, the hemlock and fir are shipped to Japan, and the spruce lumber goes to Gorman Group’s mill in Westbank, B.C. The mill also produces clear two-inch pieces for the UK, and, of course, some of the products are destined for the Canadian market.

Inside the mill
To produce such a wide range of products, Gorman Group has invested in a variety of machinery at Downie Timber.

A Cat 980M wheel loader feeds the logs from the log yard to an older cut-off saw. Logs up to 40 inches in diameter go to a Nicholson A1 debarker, and those up to 52 inches go to a Rosser head.

Those logs then go to a headrig with Lewis Controls scanning, where they are broken down by grade manually, Holland says. From there, they go to either a six-foot twin saw or a six-inch edger from Newness. Cants from the headrig go to a Newness 12-inch gang, which will then break them into two-inch and one-inch thicknesses. A Newness six-inch edger extracts as many clears as possible, which then go to a MillTech unscrambler, which feeds the trimline, where they are graded by a Comact TrimExpert.

Meanwhile, small logs are fed from the cut-off saw to a Nicholson A5 debarker, which will kick off any logs over 18 inches to the headrig. Logs smaller than 18 inches go up to an Optimil DLI log line with twin bandmills for side board recovery and USNR Perceptron scanning heads. The DLI log line has dual boxes, “so, if we rock out on one box, we can essentially move it out of the way and put the other box in. Each box will have two to four different clusters of saws, which allows us a lot of flexibility for sales,” Holland explains.

The side boards go to a five-foot Optimil Twin horizontal saw line. Anything that still needs to be remanned goes to the USNR four-inch edger line with Optimil saw box and USNR scanner. The lumber from the two lines comes together at the trimline, featuring a MillTech unscrambler, a Comact lug loader, and Comact TrimExpert scanner. The finished lumber goes to an 82-bin sorter, then to a stacker and a Cat 926M forklift that takes it out to the lumber yard.

An ‘uptick in production’
Like many other sawmills, Downie Timber has been looking to optimize their operations to help overcome challenges such as the ongoing labour shortage. So, in February last year, the mill decided to move forward with the upgrade of their four-inch edger line, adding USNR’s BioVision technology to increase their efficiency.

Downie Timber worked with USNR, which has an office nearby in Salmon Arm, B.C., for three years to make sure their scanning technology could identify knots blending into the fibre, as well as rot and white spec – common issues with Western Red Cedar, Holland explains.

“They worked very diligently with us to improve the scanning, and right away, it looked promising for what we saw in our initial trials,” he says. “Over the past couple of years, we did some more testing with them, a little bit of development, and that got us to where we are today.”

Downie’s old edger line was a USNR with UNSR Perceptron heads. In 2012, the mill installed the Comact TrimExpert scanner at the trim line, which made them realize “the shortcomings of the existing edger line,” Holland says. “The advancement in technology available allowed the team to look at what we could pick up at our current edger, and that’s really where USNR’s BioVision technology came in.”

A new scan frame was also fitted with 22 BioLuma 2900LVG vision sensors from USNR, which uses deep learning technology to improve recovery and boost uptime. Downie also installed a new USNR 625 Maximizer Edger infeed table. According to Holland, this guarantees plus or minus 0.080-inch tolerance within that board – significantly less than where they were before. The edger line now also features USNR’s MillTrak lumber flow management system with a virtual log loader to maximize material flow to the edger.

With all of this new equipment, the edger line can run upwards of 35 boards per minute, up from 28.

“Before, we’d be maxed out at 17,000 pieces by running the edger for an extra hour and 15 minutes per shift. Now, we’re seeing 18-19,000 pieces, and the machine is only running an extra half hour,” Holland says. “So, it’s quite the uptick in production, and as we extract more value in the mill, more boards will be sent to that edger.”

So far, USNR’s scanning capabilities have been good at identifying knots, shapes and splits, he adds. Downie and USNR have been working on some fine-tuning, but there haven’t been any major problems.

A month after installing the USNR BioVision technology, Downie also upgraded their Comact TrimExpert scanner and the planer’s Comact GradeExpert scanner to artificial intelligence (AI). And the mill is planning for even more upgrades.

“This year, we are redoing our chip system to allow for proper screening to ensure we provide the pulp plants with the proper material and reduce the fines. We will also increase storage capacity to keep the chips off the ground,” Holland says. They are also planning on optimizing their six-inch edger with the latest technology.

‘Last one standing’
These optimization projects will help Downie get the most value out of the fibre, which is critical given the high demand for lumber and value-added wood products.

“In the past, we might turnover lumber inventory three times in a year. But, this recent surge with COVID has really tested that,” Woodman says. “We’re turning over our inventory five or six times now. It continues to amaze us.”

But unlike other sawmills in B.C., Downie Timber is not facing a shortage of fibre. The mill has a large supply of fibre within 150 square kilometres of its site. This is partially because, as mentioned earlier, other sawmills in the area have shut down.

“It’s a bit of a graveyard for sawmills in this neck of the woods, and we’re kind of the last one standing between Salmon Arm and Golden,” Woodman says. “That’s benefitted us because there are several licensees around us that don’t have sawmills.”

For instance, LP has a veneer plant in Golden, B.C., but it does not consume cedar or spruce logs. So, Downie has an agreement with LP for those logs.

Downie’s focus on cedar has also helped the mill get a leg up in terms of competing with some of the larger sawmills to the west and north of the Okanagan, as those sawmills largely produce SPF lumber.

“We’re pretty confident in the fibre supply over the next three to five years, and that’s reflected in the investment that the Gorman family has made in us,” Woodman says.

Competing for jobs
That investment will also help Downie overcome the growing labour shortage. That shortage is particularly acute in Revelstoke, where housing is not very affordable, which makes it difficult to recruit and retain employees, Woodman says.

“So, it’s imperative that we look at our processes and where we can eliminate a position or automate a position. That’s what we’ll be focusing on because it’s getting tougher and tougher to keep those employees,” he says.

As the maintenance manager, Holland has had trouble finding qualified trades people. To combat this issue, Downie has developed an in-house training program to train employees to become millwrights. This has worked well, but it depletes the talent on the floor. Consequently, both Holland and Woodman believe optimization upgrades are the key for success in the future.

“It just helps us ensure that we get every little piece of fibre out of each log,” Holland says. “That’s going to be the name of the game moving forward, with the restraint on logs. We really just have to look at the optimization side of machines to make sure that everything is dialed in.”