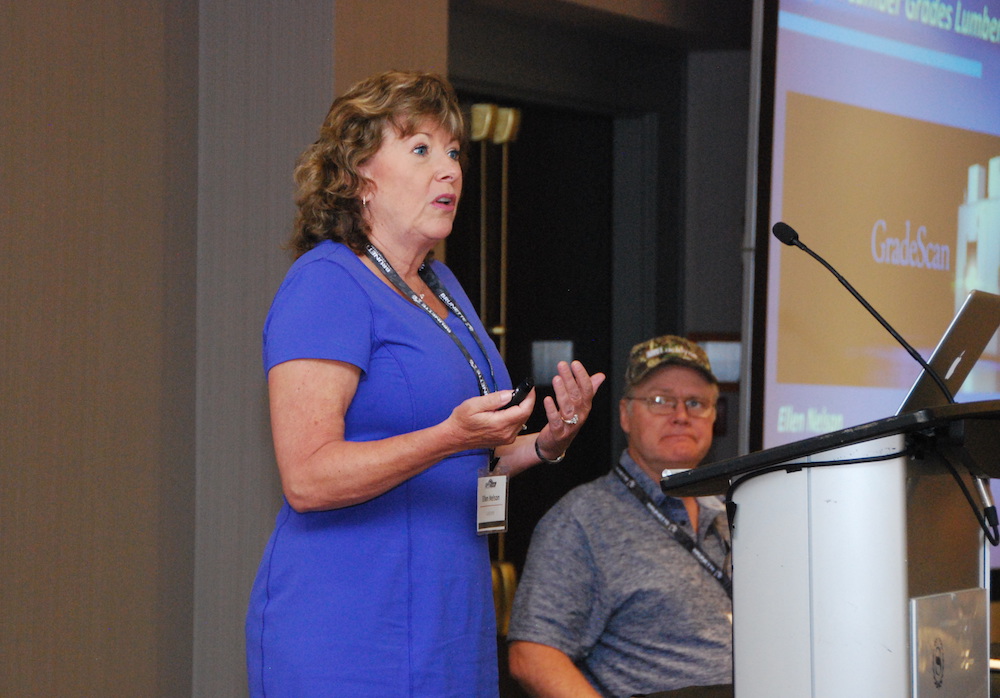 More with less was an unofficial theme at the 2019 OptiSaw forum that took place yesterday in Richmond, B.C. Presenters shared solutions to derive more value from less wood, fewer people, and in less time.

Ten presentations from industry-leading manufacturers offered up a glimpse at future possibilities for Western Canada’s sawmill sector to remain competitive and profitable.

Industrial robotics, while around since the ’50s, have advanced considerably in the past several years. Tebulo Industrial Robotics’ Jon Vanspronsen kicked off the day-long forum with a presentation on where industrial robotics can fit into the wood products industry.

“All industries are facing an aging labour force,” Vanspronsen said. Robotics can fill that void while achieving a higher consistency of product through accuracy and repeatability.

Much of the current robot use in the wood products industry is downstream of the sawmill, but Vanspronsen outlined some applications for robotics in the mill, such as material handling, cardboard applications, product coding and identification, painting and edge sealing, wrapping, labels and barcodes, and dunnage.

Another opportunity is robotic sorting on the green chain. “This has the ability of customizing stacks for made-to-orders for customers,” Vanspronsen said.

Artificial intelligence was another hot topic addressed by a number of OptiSaw presentations as way to increase accuracy and speed at various points in the mill.

Lucidyne CFO Ellen Nelson and Dave Reader, Hampton Lumber fibre recovery specialist, were the first to address AI in their discussion of Lucidyne’s Perceptive Sight Intelligent Grading platform. Hampton Lumber is running, or in the process of installing, the grading system at three of its Oregon sawmills.

The first Perceptive Sight installation brought out some concerns from the Hampton team, Reader said. “We had a high standard that we took to Lucidyne. But by the third day we had completely stopped manual grading, and we never have again. It exceeded our expectations.”

Nelson said Lucidyne is adding a new species to the Perceptive Sight system about once a month. With a hardwood mill about to bring the system online, the library will expand significantly this summer, she said.

Continuing the AI theme, BID Group’s Diego do Santos introduced the company’s new fully integrated approach to AI in its software platforms. Their latest product, called the SpecPro, uses AI to identify wood species in real time, without contacting the wood fibre or using any consumables.

Two SpecPro systems are currently running in Eastern Canada, one separating spruce and balsam and the other spruce Jack pine; they are achieving 99 and 98.9 per cent accuracies, respectively. Other lab tests on various species have upwards of 96 per cent accuracy.

Comact’s GradExpert is also using deep learning to identify wood defects. “Rot, that’s the most challenging defect to find and we’ve been working really hard on that,” dos Santos said. “We’ve created the first deep learning system to detect that.”

Springer-Microtec’s Norvin Laudon gave the audience another value prospect, sharing real-world examples of their CT Log X-ray computer tomography scanner in action. The CT scanner uses X-ray technology to give a 3D image of whole logs to identify the extent of knots and other defects, which can radically change sawing patterns.

Cedar, in particular, is “very scan-able,” Laudon said. By identifying and suggesting the highest value clears in each log it can double the final value of the log.

“We continue to believe this scanner is a game changer – it’s quite new in the industry, but it really affects the bottom line of the sawmill,” Laudon said.

The afternoon sessions began with three presentations on advancements and R&D on saw monitoring systems. FPInnovations’ mechanical engineer Ahmad Mohammadpanah kicked things off with an overview of the research they conducted on circular saws. After trail and error, they determined saw temperature measured at two points on the blade is a good indicator of saw stiffness.

The research from FPInnovations led to commercialization of a saw temperature monitor that has been brought to market recently by Williams & White, called SawSense. Justin Williams, CEO of Williams & White, presented on the practical advantages installing the system for real-time saw monitoring.

Williams also spoke to the advantages of another saw monitoring system, SawADD, which measures forces on bandsaw or roundsaw blades to automatically slow or speed up the feed to avoid saw deviation.

“The entire monitoring system means a smart sawbox,” Williams said. “It’s about collecting the right data and sending it though the cloud so it’s accessible by all departments.”

Vahid Nasir, a PhD candidate at UBC’s wood science department closed out the saw monitoring presentations with his own research on using sensors to assess sawing surface quality and power consumption.

Continuous kilns continue to be a hot topic in North America, and Ingo Wallocha with Valutec presented on the company’s newest intelligent kiln controls system for their uni-directional continuous kilns.

Opticom Tech’s North American manager Heidi Schmidt gave an overview of what’s involved in sawmills switching from analog cameras to IP network cameras. The switch is already happening in the U.S. and is making its way to Canada. “Whether your making that switch or not, the reality is that’s where you’re at as an industry,” Schmidt said.

There are options for how to make the switch more economically, such as linking current coaxial cables to new IP network ones, but sometimes decisions come down to quality given the rough, industrial environment of sawmills, she said.

EACOM’s corporate project and controls manager, Sylvain Messier, presented in tandem with Autolog sales manager, Gille Gauvin, on the results from installing Autolog’s ProGrader linear planer optimizer at three of their mills. Messier shared percentages of premium increase at each mill after installation of the optimizers, and offered advice for working on new mill projects.

“Sometimes mills think a vendor is going to come in there and fix everything, but if you don’t have the personnel in the mill to own it and push it, it’s not going to work. We’ve been guilty of this and learned from it,” Messier said.

EACOM’s goal is to train the staff so mills are autonomous, needing little to no after-project support, he said. To do that, they require vendor training and support from the outset.

“We make sure we eliminate all grey zones from the beginning to prevent frustrations from any miscommunication,” Messier said.

An archive of the presentations will be available on the OptiSaw website shortly.

Don’t want to miss out on OptiSaw next year? Sign up for CFI’s week enewsletter to watch for next year’s dates. Sign up here.


Related
Staying ahead of the curve: OptiSaw 2018 showcases the latest tech
Fully automated: Applying robotic solutions to the sawmill
Autolog adapting Saptek for West
‘Our focus is on impact with speed’: Stéphane Renou talks Forestry 4.0