Times may be tough out there for both solid and engineered wood products manufacturers but you wouldn’t know it walking through the DRIcore plant in the Toronto, Ont., suburb of Mississauga. The company, which is a wholly-owned subsidiary of Montreal, Que.-based Kruger Inc., is a major hive of activity where 4 ft. x 8 ft. sheets of oriented strand board (OSB) are converted into 2 ft. x 2 ft. panels for engineered subfloor systems. 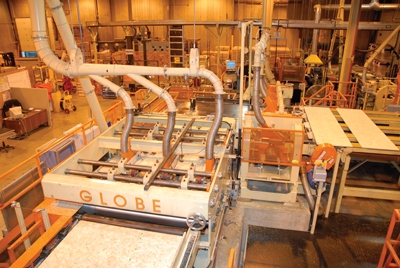 Sold under the trade name of “DRIcore Subfloor” at DIY home centres across Canada and the U.S., the product creates a one- step installation moisture barrier designed to elevate and insulate finished floors from the cold and damp concrete surfaces typically found in basements, garages and other ground level rooms. Dan Touseant, marketing manager for the product, says DRIcore has proven to be a winner at the retail level and he says in some markets it is difficult to keep it on the store shelf.

“We like to think of ourselves as ‘recession proof’ and we have definitely been less impacted by the current market conditions than other companies in the wood products business,” Touseant says. “This is partially due to the fact that people are not building new homes or moving to bigger houses right now. Instead, they are taking the more cost-effective approach of finishing areas of their existing home that were not being used on a regular basis, and in Canada they are also taking advantage of the Federal Government’s renovation tax credit to do it.”

Wayne Bullard, who is the customer service representative for DRIcore and mans the customer service call-in lines on a regular basis, says three out of every four calls he takes right now are from people who are planning to finish a garage or basement and want to know how to use the DRIcore product to do it. “This is especially the case in the U.S. where it can be really tough to get a mortgage at the moment, so people are staying in their current homes,” he explains. “Our product is generally not used in new homes. It is used maybe five years down the road when homeowners are making the decision between buying up to get more space, or renovating to find the additional living area they want.” 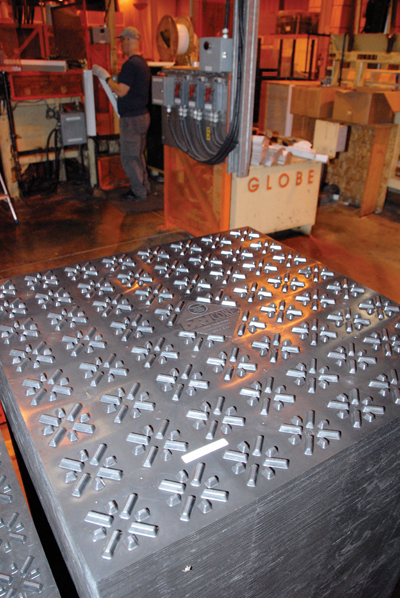 DRIcore was originally developed when Kruger Inc. employee Bob Smith needed a quick fix for a moisture problem in his basement. He started by gluing hockey pucks to the underside of OSB panels to create a subfloor. Realizing there might be a market for this product, he worked on his own time, developing the panels. Kruger took over the commercialization of the product and launched it in the home improvement retail market in 2001. Today, Smith is still with the company and works from an office just above the production floor of the DRIcore plant in Mississauga, where he is general manager sales and marketing for True North Hardwood Plywood in Cochrane, Ont., a joint venture company formed earlier this year between Kruger and Norbord Inc.

The first commercial versions of the DRIcore product were made from waferboard that was shipped by rail from Kruger’s Longlac plant, but when the plant closed this year, they switched over to OSB for the subfloor product production, which they currently get from a Norbord facility in Val D’Or, Que.

“The main difference between waferboard and OSB is that with waferboard the strands are random, while with OSB the strands are all oriented in the same direction,” explains Bullard. “We are now using an enhanced OSB, which gives us very similar properties to waferboard, especially for density and strength.”

The other main component in the DRIcore product is a high-density polyethylene membrane that is delivered in 2 ft. x 2 ft. sheets. The membranes are injection moulded and include cleats to raise the finished panels off the floor, which allows for airflow underneath the subfloor. The membranes are supplied by a third-party injection moulding company located in Southern Ontario.

How DRIcore is Produced

Production at the DRIcore plant is a fairly straightforward process that starts with the 4 ft. x 8 ft. x 5/8 in. OSB panels being unstrapped and loaded onto the converting line, which is a Globe sawline equipped with a Grecon spark detection system. The sawline was specifically manufactured for DRIcore. The panels are cut into 2 ft. x 2 ft. tongue and groove squares with two sides having a tongue and two sides having a groove.

After the OSB is processed, it is stacked on the machine and then matched up to the polyethylene membranes, which have been coated with a hot melt adhesive. The two pieces are then pressed together, labeled with a full-colour product label and a bar code, bundled, and stretch wrapped for shipment to the retailers. Frequent quality control checks are done by pulling samples off the line and checking tolerances for various properties, including profile, size, thickness, strength, density, and glue adhesion. In total, DRIcore employs around 25 people, and has sold more than 25 million panels since its inception.

The plant has its own rail line, which is part of the CN system, and it has multiple loading bays, allowing the shipping and receiving department to keep up with the incoming raw materials and outgoing finished products.

Touseant says the market for the product is evenly split between Canada and the U.S. with a very small amount going to Korea. Most of the North American sales are in the U.S. Northeast and Midwest and in the Canadian Prairie provinces, Ontario, Quebec and the Atlantic Provinces. “We see very little activity in British Columbia in Canada and south of the Mason-Dixon Line in the U.S. where homes with basements are less prevalent,” Touseant notes.

Market research played a key role in determining the target market for the product, and in developing the product specifications, specifically size. “25% of the people who buy and install this product are women,” Touseant explains. “That was a key demographic for us and one of the reasons we made the product in a manageable size. We also knew that in most cases, this product would be installed by a homeowner who may not have a truck, so we wanted a product consumers could handle themselves and take home from the store in the trunk of their car.”

The panels are sold as individual units with a suggested retail price point of $6.47 in Canada and $5.98 in the U.S. The panels are shipped to the stores on stretch-wrapped wood pallets with each pallet containing 120 panels. Bullard says the average residential project completed using DRIcore will take 135 panels, bringing the average project in at under $1,000. He adds that the installation doesn’t require any specialized tools and a typical 500 square foot room can be completed by the home owner in less than half a day.

While walking through the rows of  product waiting for shipment to retailers, Bullard talks about the company’s strengths.  “We have really developed our business by keeping things simple,” he concludes. “We are a one-SKU company with a product that is fairly simple to manufacture and install. Plus, we have all the flexibility of a small entrepreneurial company while having the backing of a major corporation such as Kruger Inc. It just doesn’t get any better than this.”