March 31, 2015 - A small rough cut mill in Mackenzie, B.C., has taken safety to a new level. Rather than housing the sawline in the mill and equipping the building with fans and vacuums to keep the dust from settling, the Duz Cho sawmill is built outside, where the elements keep dust levels down and only the finished lumber is stored inside. But that’s not the only way Duz Cho sawmill thinks outside of the box – this sawmill boasts a full line of fresh ideas.

Duz Cho sawmill is owned by the McLeod Lake Indian Band and began ramping up production in July 2014. It had only been up and running for a few months when Canadian Forest Industries got to peek behind the curtain – in fact, the curtain hadn’t been hung yet (more to follow).

Planned to be a cant mill and designed to use the four-inch tops other sawmills reject, it’s a rough cut mill that cuts to order. On the day of the tour, it had a number of orders of furniture-grade ready and another 10 containers worth of economy grade  all bound for China. Not bad for a mill in its third month.

More of a co-op than a traditional sawmill, all the workers have matching coveralls, including management, to show that they’re all in it together. The employees are all trained in each position and they get paid a flat rate once they’ve done their time on the broom.

The mill has 20 employees and runs four 12-hour days on and four days off with maintenance on graveyard. Two shifts keep the mill running daily.

Barwise demonstrates how the mill is designed to make use of off-the-shelf technology to save money. “From a safety perspective, what I really like is that any of us can log on and see who is onsite at any given time.”

When workers clock in, they scan a card over an iPad that is equipped with an app to log payroll.

Combined learning
Barwise has learned a lot from his career at different sawmills. He and maintenance superintendent Steve Holdstock have taken best practices from their experiences and come up with efficiencies and safety protocols that make a lot of sense.

One of these safety details is the lockout board in the staff room. A set of locks and a spot on the board has been assigned to each worker. Everyone collects his or her locks at the start of the shift and keeps them until the end of the day before retiring the locks to the board. Managers can take a quick look at the board to check for any missing locks – a red flag.

The mill has been designed to consume underutilized log tops, rather than the status quo, which sees them burned in the woods. Instead, Duz Cho has gone back to full tree logging and log yard processing.

Logs are brought in by truck from Duz Cho Logging, which is also owned by the McLeod Lake Indian Band, but works with Canfor, Conifex and Mackenzie Fibre. Logs are merchandized on a deck, and sorted so that the small logs are kept for the sawmill, larger logs are sold to neighbouring mills, and the biomass from the merchandizing deck is sold to a local pulpmill.

The long-term goal is to consume over a half a million cubic metres, but ramping up to that number will take some time.

Managing risk
About 70 per cent of the logs processed at the Duz Cho sawmill are beetle kill so dust management has taken priority in the mill’s design. “We’re eliminating one of the elements of a dust explosion right off the bat by not having any containment,” Barwise explains, while walking through the outdoor mill.

Lights have been changed to LED to keep them from generating heat, ceiling beams were filled in with spray foam and a Hurricane 300 vacuum sucks up dust produced by the trimmer.

“We perform dust audits daily at each job station to monitor accumulations and coordinate cleanup,” he adds. “Everyone’s been educated on our dust management policy and what we can and cannot do.”

On the day Barwise took Canadian Forest Industries through the mill, it was shut down and the maintenance crew was doing a blow down. “We’ve assessed the ignition sources, use the vacuum where possible and use air in short bursts as a last resort,” he notes.

The sawmill itself was purchased piece-by-piece from sawmills across Canada. The HewSaw line came from Alberta, while the tray sorter, stacker and debarkers came from Quebec. Much of the remaining equipment was manufactured to fit.

A wheel loader drops the logs onto the infeed deck and they’re fed into the 12-inch Nicholson A5A debarker before being sent through the HewSaw line. The HewSaw processes the log into a cant and feeds it to a trimmer grader line.

Because the mill is working with such small wood that is sold unfinished, the graders only have a few things to look for. “Bark and wane are the main thing,” Barwise says. “We make sure the length grades are tailored to customer requirements.”

Graders decide whether to trim the boards to optimize the grade. Anything that doesn’t at least make economy is sent to the chipper. The lumber is then brought up to the trays and sorted by length, grade and moisture.

The mill is equipped with a tray sorter with eight trays that can hold approximately 500 pieces each. The tray sorter is easy on the brittle beetle-kill wood and suits the mill’s needs.

Container shipping
A bander/forklift operator bands the rough cut lumber in a Signode bander for eventual loading into containers. He creates the sticker label and weighs the packages to maximize volume to the allowable weight of the container.

“The reason we chose to stuff the containers here is that the truck backs right in, we put the material in the can, we put the seal on it and they open it up right in China,” Barwise says. “Our first container that we stuffed took an hour and 20 minutes just trying to figure out how everything was. Our last one took nine minutes and 50 seconds.”

Overall, the mill could easily operate on as few as five people, including the operator loading logs on to the deck. But it’s the people who operate the machines that bring life to the operation – and that’s how the business was conceived.

The sawline operator has a prominent indoor seat with a view of the mountain behind the saws. He brings much of the experience that’s being passed down to workers. “[He] can see the whole yard, the chip bin, and his monitors tell him
everything that’s going on right now. The fellow that sits in this chair is our lead guy. Our whole design was to protect people from the elements and have machines exposed to the elements.”

There is a significant number of band members and other First Nations working in the mill. Though the crew was fairly inexperienced, Barwise says they decided that a good attitude, willingness to learn and safe work ethic were more important than experience alone.

Rather than simply recruit the most experienced workers in the region, management wanted a fresh start.

“We thought it was imperative not to inherit a culture, we want to establish one as our own group,” he says. “So it meant that we brought in a little bit less skill.” But as long as a worker has the desire to learn, skills can be taught.

With fresh thinking and a focus on safety, Duz Cho sawmill is a smooth addition to the forest industry in Mackenzie. 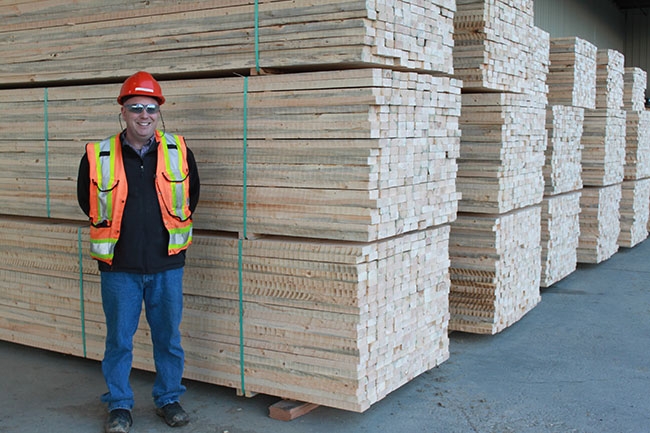 Mill operations manager Bill Barwise with bundles of green lumber ready to ship. “We thought it was imperative not to inherit a culture March 31
Print this page