There’s a little bit of North America in northwest England, but you might have to venture into BSW Timber’s largest U.K. sawmill to find it. The company’s Carlisle softwood mill, which is located just 16 kilometres (10 miles) south of the Scottish border, recently installed a pair of trim lines from Woodland, Wash.-headquartered USNR. 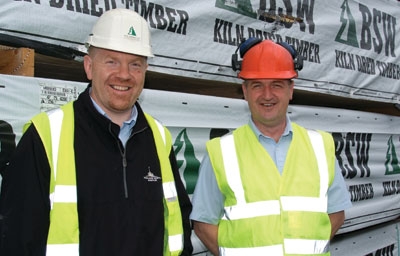 BSW’s main goal for the two-phase project was to eliminate bottlenecks from the production process in order to  increase piece counts and improve recovery. Step one, which was completed in December 2007, involved an upgrade to the mill’s side board production line, while step two, which started up a year later in December 2008, included updates to the mill’s main board line. 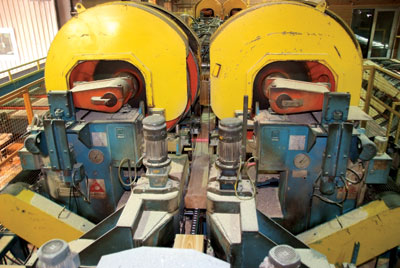 Upstream from the new trim lines is the mill’s original Canadian-made Kockums Cancar canter, which was installed when the mill was built in 1991. The cants are sent through three Kockums Cancar bandsaws with 11 bands in total – two quads and a triple – before being directed to the newest trim line, while the side boards from the canter go to one of two Swedish made Catech edgers and then to the slightly older side board trim line.

The two trim lines are very similar; however, when the main trim line was installed it included a few components that could handle larger boards. The older side board line has a high-speed Quad Cam board feeder, a trimmer optimizer and a six-stage trimmer fence, while the main board line features an accelerating lug feeder, a trimmer optimizer and a four-stage fence. Allen-Bradley ConrolLogix controls for the existing trimmer and sorting equipment were added to both lines.

Both trimmer optimizers are transverse MIllExpert models with 3D Smart TriCam laser sensors. The main board line operates at 100 lugs per minute (LPM) while the side board line runs at 120 LPM. 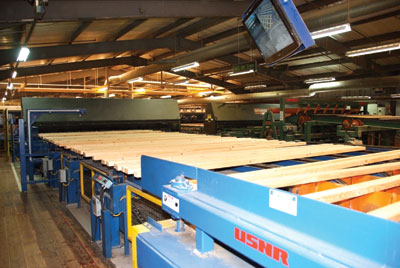 Carlisle mill manager Alistair Sommerville and the mill’s project manager and electrical specialist, Nigel Patrickson, worked closely with the USNR team throughout both projects, resulting in an excellent startup for the two lines. In both cases, day one of operation following the installations resulted in the mill running at 70% of its normal production volumes, with a jump to 100% on day two.

Ahead of the Game

For most mills in the U.K. and in many other parts of Europe, Scandinavian breakdown and processing equipment is the norm, but at BSW, which is the U.K.’s largest timber producer with five mills in Scotland, England and Wales, and one mill in Latvia, they have taken a slightly different approach, looking across the pond to North America for some cutting edge gear.

“In my opinion, the North Americans are ahead of the game, especially when it comes to scanning and optimization,” explains Scott Shiells, the Earlston, Scotland-based group operations manager for BSW Timber. “We have done an upgrade with USNR on our trimmer optimizer at our Newbridge mill in Wales, and we have installed scanning equipment from Vancouver-based MPM Engineering at a couple of our mills, including the log breakdown area of the Latvian mill and two systems in our Boat of Garten mill in Scotland.”

Shiells says the scanning gear installed at Boat of Garten is the first of its kind outside of Canada. “With the MPM in the log sorting line, we can scan the wood under the bark’s surface,” he explains. “This helps us out as the bark is already half off the trees we get from a lot of harvesting sites in Scotland, and this creates scanning errors.  We are also seeing gains on pine where there is even bigger variability in Bark thickness.”

Back at the Carlisle mill, Sitka Spruce is the species of choice. It is delivered from a radius of about 100 kilometres (60 miles) with a large percentage of it coming from the nearby Borders region of Scotland. Shiells says access to a good timber supply was one of the reasons BSW chose the Carlisle location for the mill, which the company built from scratch. But, he adds that there were a few other strategic reasons as well. “This used to be the largest rail goods yard in England,” he says. “And it has good access to the M6, which is the country’s main motorway, making it an ideal location for bringing in raw materials and shipping out finished products.” 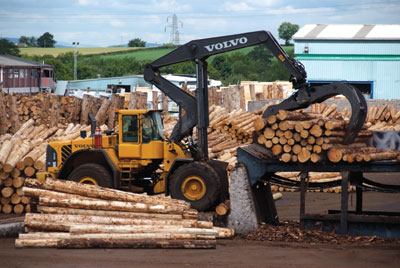 The log yard at the Carlisle mill is typically European in design with a fleet of Volvo loaders unloading 320,000 m3 of logs every year. The mix is about 40% tree length with the remainder being cut to length (CTL) in sizes ranging from 2.4 metres (almost 8 ft.) to 4.8 metres (almost 16 ft.). The CTL logs are generally put into inventory while the tree length logs are hot fed into the system whenever possible. The first stop for the tree length logs is a separate building from the main sawmill where they are scanned with USNR’s Perceptron scanning equipment before going through the cut-off saws where they are processed to specific lengths and then dropped into one of 16 bins that are used to sort the logs for diameter, length and specific specialty products.

Before being fed into the sawmill, a Fuchs grapple equipped loader feeds all logs into another stand-alone building that houses a Forano (now USNR) debarker. Once debarked, the logs are sorted again just before being fed into the mill, this time in a 32-bin system. Once the logs are in the mill, they go straight to the canter and then to the band saws or edgers before the new trim lines. Next in line is one of two Swedish made Almab J-Bar sorters, an 11-bin model and a 40-bin model, and then one of three Almab stackers with auto stick placement. The stacked packages exit the mill on the bottom level of a two deck infeed/outfeed.

From the stackers, green products are sent to the remanufacturing area where they are processed into numerous products, including fencing, landscaping materials and packaging products such as pallet stock. Any products that will be kiln dried are sent to one of six gas-fired Lignomat European-made kilns, where they will spend 80 to 90 hours before being fed back into the facility’s planer mill though the upper level of the infeed/outfeed. The lumber going through the planer is manually graded first and then it is graded through a Cook Bolinder automated grader that is grading for the C-16 grade, which is the U.K. equivalent of machine stress rated (MSR) lumber. Following the automated grading, a Waco planer operating at approximately 100 metres per minute further processes the lumber prior to another Almab stacker and a manual wrap station.

The mill’s annual output is about 185,000 m3 (almost 80 million board ft.) of sawn wood products. Dimension lumber products range in size from the metric equivalent of 2×2 to 2×10 and in lengths up to almost 16 ft. The mill operates on two eight-hour shifts, five days a week and employs approximately 135 people including management, production and support staff.
For the production crews working with the new trim lines, Shiells says there wasn’t a dramatic learning curve. “The old board line we had at Carlisle was from U.S. manufacturer CSMI, which has since been taken over by USNR, so our crews were familiar with that equipment,” explains Shiells. “Plus there was an upgrade path to the new trim line equipment so it wasn’t that difficult for us, but we did bring in one trainer to the mill from USNR and we sent some of our guys to USNR in Parksville, B.C., for additional training.”

Shiells says going with more North American style equipment is in keeping with the market demands in the U.K. “We have work to do on the back end of the Carlisle mill,” he says. “We need to look at our planing and grading systems because the market in the U.K. has changed. Typically, in the past we would have shipped our products rough and green. Now about 45% of our products are kiln dried and planed with this percentage continuing to grow. To meet that change in demand, we therefore have to operate higher speed planing lines more typical to a North American mill,” he concludes.